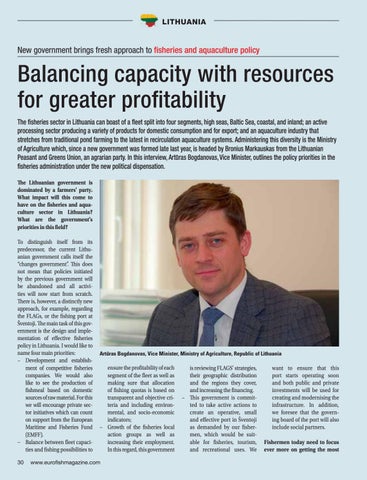 Balancing capacity with resources for greater proﬁtability The ﬁsheries sector in Lithuania can boast of a ﬂeet split into four segments, high seas, Baltic Sea, coastal, and inland; an active processing sector producing a variety of products for domestic consumption and for export; and an aquaculture industry that stretches from traditional pond farming to the latest in recirculation aquaculture systems. Administering this diversity is the Ministry of Agriculture which, since a new government was formed late last year, is headed by Bronius Markauskas from the Lithuanian Peasant and Greens Union, an agrarian party. In this interview, Artu-ras Bogdanovas, Vice Minister, outlines the policy priorities in the ﬁsheries administration under the new political dispensation. The Lithuanian government is dominated by a farmers’ party. What impact will this come to have on the fisheries and aquaculture sector in Lithuania? What are the government’s priorities in this field? To distinguish itself from its predecessor, the current Lithuanian government calls itself the “changes government”. This does not mean that policies initiated by the previous government will be abandoned and all activities will now start from scratch. There is, however, a distinctly new approach, for example, regarding the FLAGs, or the fishing port at Šventoji. The main task of this government is the design and implementation of effective fisheries policy in Lithuania. I would like to name four main priorities: − Development and establishment of competitive fisheries companies. We would also like to see the production of fishmeal based on domestic sources of raw material. For this we will encourage private sector initiatives which can count on support from the European Maritime and Fisheries Fund (EMFF). − Balance between fleet capacities and fishing possibilities to 30

ensure the profitability of each segment of the fleet as well as making sure that allocation of fishing quotas is based on transparent and objective criteria and including environmental, and socio-economic indicators; − Growth of the fisheries local action groups as well as increasing their employment. In this regard, this government

is reviewing FLAGS’ strategies, their geographic distribution and the regions they cover, and increasing the financing. − This government is committed to take active actions to create an operative, small and effective port in Šventoji as demanded by our fishermen, which would be suitable for fisheries, tourism, and recreational uses. We

want to ensure that this port starts operating soon and both public and private investments will be used for creating and modernising the infrastructure. In addition, we foresee that the governing board of the port will also include social partners. Fishermen today need to focus ever more on getting the most

This issue features Lithuania and reviews the SEG show in Brussels. The trade and markets section looks at inhumane working conditions while...

This issue features Lithuania and reviews the SEG show in Brussels. The trade and markets section looks at inhumane working conditions while...