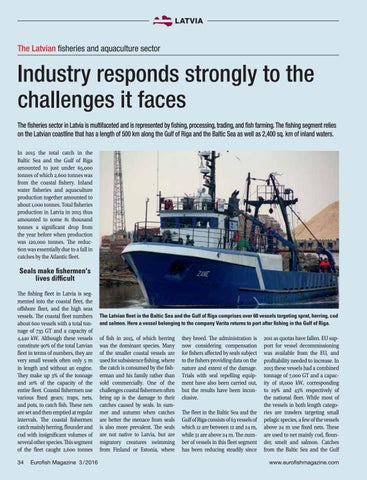 The Latvian ﬁsheries and aquaculture sector

Industry responds strongly to the challenges it faces The ﬁsheries sector in Latvia is multifaceted and is represented by ﬁshing, processing, trading, and ﬁsh farming. The ﬁshing segment relies on the Latvian coastline that has a length of 500 km along the Gulf of Riga and the Baltic Sea as well as 2,400 sq. km of inland waters. In 2015 the total catch in the Baltic Sea and the Gulf of Riga amounted to just under 65,000 tonnes of which 2,600 tonnes was from the coastal fishery. Inland water fisheries and aquaculture production together amounted to about 1,000 tonnes. Total fisheries production in Latvia in 2015 thus amounted to some 81 thousand tonnes a significant drop from the year before when production was 120,000 tonnes. The reduction was essentially due to a fall in catches by the Atlantic fleet.

Seals make fishermen's lives difficult The fishing fleet in Latvia is segmented into the coastal fleet, the offshore fleet, and the high seas vessels. The coastal fleet numbers about 600 vessels with a total tonnage of 735 GT and a capacity of 4,440 kW. Although these vessels constitute 90 of the total Latvian fleet in terms of numbers, they are very small vessels often only 5 m in length and without an engine. They make up 3 of the tonnage and 10 of the capacity of the entire fleet. Coastal fishermen use various fixed gears; traps, nets, and pots, to catch fish. These nets are set and then emptied at regular intervals. The coastal fishermen catch mainly herring, flounder and cod with insignificant volumes of several other species. This segment of the fleet caught 2,600 tonnes 34

The Latvian fleet in the Baltic Sea and the Gulf of Riga comprises over 60 vessels targeting sprat, herring, cod and salmon. Here a vessel belonging to the company Varita returns to port after fishing in the Gulf of Riga.

of fish in 2015, of which herring was the dominant species. Many of the smaller coastal vessels are used for subsistence fishing, where the catch is consumed by the fisherman and his family rather than sold commercially. One of the challenges coastal fishermen often bring up is the damage to their catches caused by seals. In summer and autumn when catches are better the menace from seals is also more prevalent. The seals are not native to Latvia, but are migratory creatures swimming from Finland or Estonia, where

they breed. The administration is now considering compensation for fishers affected by seals subject to the fishers providing data on the nature and extent of the damage. Trials with seal repelling equipment have also been carried out, but the results have been inconclusive. The fleet in the Baltic Sea and the Gulf of Riga consists of 63 vessels of which 12 are between 12 and 24 m, while 51 are above 24 m. The number of vessels in this fleet segment has been reducing steadily since

2011 as quotas have fallen. EU support for vessel decommissioning was available from the EU, and profitability needed to increase. In 2015 these vessels had a combined tonnage of 7,000 GT and a capacity of 18,000 kW, corresponding to 29 and 43 respectively of the national fleet. While most of the vessels in both length categories are trawlers targeting small pelagic species, a few of the vessels above 24 m use fixed nets. These are used to net mainly cod, flounder, smelt and salmon. Catches from the Baltic Sea and the Gulf www.eurofishmagazine.com

Featuring Latvia and Germany, this issue also looks at events like the SEG in Brussels, NASF in Bergen and our aquaculutre section looks at...

Featuring Latvia and Germany, this issue also looks at events like the SEG in Brussels, NASF in Bergen and our aquaculutre section looks at...