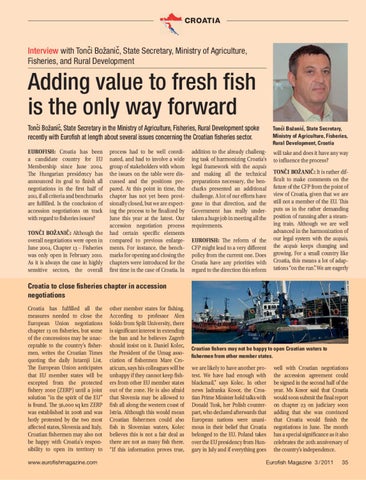 Adding value to fresh ﬁsh is the only way forward Toncˇi Božanicˇ, State Secretary in the Ministry of Agriculture, Fisheries, Rural Development spoke recently with Euroﬁsh at length about several issues concerning the Croatian ﬁsheries sector. EUROFISH: Croatia has been a candidate country for EU Membership since June 2004. The Hungarian presidency has announced its goal to finish all negotiations in the first half of 2011, if all criteria and benchmarks are fulfilled. Is the conclusion of accession negotiations on track with regard to fisheries issues? TONCˇ I BOŽANICˇ : Although the overall negotiations were open in June 2004, Chapter 13 – Fisheries was only open in February 2010. As it is always the case in highly sensitive sectors, the overall

process had to be well coordinated, and had to involve a wide group of stakeholders with whom the issues on the table were discussed and the positions prepared. At this point in time, the chapter has not yet been provisionally closed, but we are expecting the process to be finalized by June this year at the latest. Our accession negotiation process had certain specific elements compared to previous enlargements. For instance, the benchmarks for opening and closing the chapters were introduced for the first time in the case of Croatia. In

addition to the already challenging task of harmonizing Croatia’s legal framework with the acquis and making all the technical preparations necessary, the bencharks presented an additional challenge. A lot of our efforts have gone in that direction, and the Government has really undertaken a huge job in meeting all the requirements. EUROFISH: The reform of the CFP might lead to a very different policy from the current one. Does Croatia have any priorities with regard to the direction this reform

will take and does it have any way to influence the process? TONCˇ I BOŽANICˇ : It is rather difficult to make comments on the future of the CFP from the point of view of Croatia, given that we are still not a member of the EU. This puts us in the rather demanding position of running after a steaming train. Although we are well advanced in the harmonization of our legal system with the acquis, the acquis keeps changing and growing. For a small country like Croatia, this means a lot of adaptations “on the run”. We are eagerly

Croatia to close ﬁsheries chapter in accession negotiations Croatia has fulfilled all the measures needed to close the European Union negotiations chapter 13 on fisheries, but some of the concessions may be unacceptable to the country's fishermen, writes the Croatian Times quoting the daily Jutarnji List. The European Union anticipates that EU member states will be excepted from the protected fishery zone (ZERP) until a joint solution “in the spirit of the EU” is found. The 56,000 sq km ZERP was established in 2008 and was hotly protested by the two most affected states, Slovenia and Italy. Croatian fishermen may also not be happy with Croatia's responsibility to open its territory to www.eurofishmagazine.com

other member states for fishing. According to professor Alen Soldo from Split University, there is significant interest in extending the ban and he believes Zagreb should insist on it. Daniel Kolec, the President of the Umag association of fishermen Mare Croaticum, says his colleagues will be unhappy if they cannot keep fishers from other EU member states out of the zone. He is also afraid that Slovenia may be allowed to fish all along the western coast of Istria. Although this would mean Croatian fishermen could also fish in Slovenian waters, Kolec believes this is not a fair deal as there are not as many fish there. “If this information proves true,

Croatian ﬁshers may not be happy to open Croatian waters to ﬁshermen from other member states.

we are likely to have another protest. We have had enough with blackmail,” says Kolec. In other news Jadranka Kosor, the Croatian Prime Minister held talks with Donald Tusk, her Polish counterpart, who declared afterwards that European nations were unanimous in their belief that Croatia belonged to the EU. Poland takes over the EU presidency from Hungary in July and if everything goes

well with Croatian negotiations the accession agreement could be signed in the second half of the year. Ms Kosor said that Croatia would soon submit the final report on chapter 23 on judiciary soon adding that she was convinced that Croatia would finish the negotiations in June. The month has a special significance as it also celebrates the 20th anniversary of the country’s independence.

This issue covers Croatia, Poland and the US, and looks into sustainability certification, the MSC model. High pressure processing and recir...

This issue covers Croatia, Poland and the US, and looks into sustainability certification, the MSC model. High pressure processing and recir...