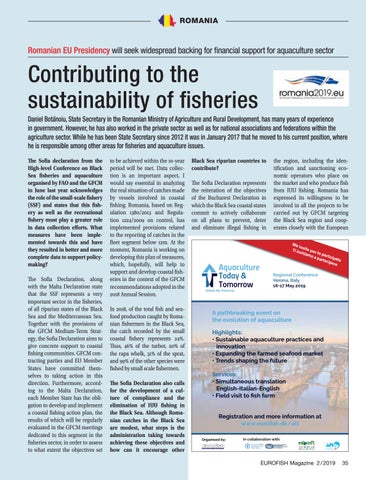 Contributing to the sustainability of ďŹ sheries Daniel BotaĚ&amp;#x2020;noiu, State Secretary in the Romanian Ministry of Agriculture and Rural Development, has many years of experience in government. However, he has also worked in the private sector as well as for national associations and federations within the agriculture sector. While he has been State Secretary since 2012 it was in January 2017 that he moved to his current position, where he is responsible among other areas for ďŹ sheries and aquaculture issues. The Sofia declaration from the High-level Conference on Black Sea fisheries and aquaculture organised by FAO and the GFCM in June last year acknowledges the role of the small-scale fishery (SSF) and states that this fishery as well as the recreational fishery must play a greater role in data collection efforts. What measures have been implemented towards this and have they resulted in better and more complete data to support policymaking? The Sofia Declaration, along with the Malta Declaration state that the SSF represents a very important sector in the fisheries, of all riparian states of the Black Sea and the Mediterranean Sea. Together with the provisions of the GFCM Medium-Term Strategy, the Sofia Declaration aims to give concrete support to coastal fishing communities. GFCM contracting parties and EU Member States have committed themselves to taking action in this direction. Furthermore, according to the Malta Declaration, each Member State has the obligation to develop and implement a coastal fishing action plan, the results of which will be regularly evaluated in the GFCM meetings dedicated to this segment in the fisheries sector, in order to assess to what extent the objectives set

Black Sea riparian countries to contribute? The Sofia Declaration represents the reiteration of the objectives of the Bucharest Declaration in which the Black Sea coastal states commit to actively collaborate on all plans to prevent, deter and eliminate illegal fishing in

the region, including the identification and sanctioning economic operators who place on the market and who produce fish from IUU fishing. Romania has expressed its willingness to be involved in all the projects to be carried out by GFCM targeting the Black Sea region and cooperates closely with the European W ei