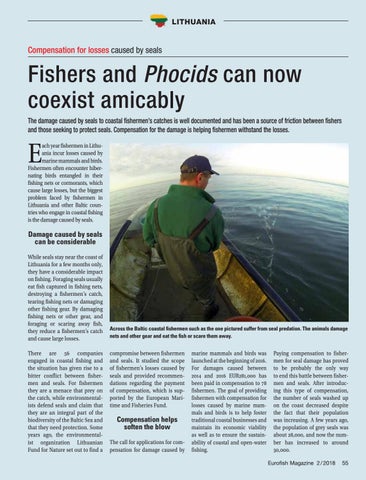 Compensation for losses caused by seals

Fishers and Phocids can now coexist amicably The damage caused by seals to coastal ďŹ shermenâ&#x20AC;&#x2122;s catches is well documented and has been a source of friction between ďŹ shers and those seeking to protect seals. Compensation for the damage is helping ďŹ shermen withstand the losses.

Damage caused by seals can be considerable While seals stay near the coast of Lithuania for a few months only, they have a considerable impact on fishing. Foraging seals usually eat fish captured in fishing nets, destroying a fishermenâ&#x20AC;&#x2122;s catch, tearing fishing nets or damaging other fishing gear. By damaging fishing nets or other gear, and foraging or scaring away fish, they reduce a fishermenâ&#x20AC;&#x2122;s catch and cause large losses. There are 56 companies engaged in coastal fishing and the situation has given rise to a bitter conflict between fishermen and seals. For fishermen they are a menace that prey on the catch, while environmentalists defend seals and claim that they are an integral part of the biodiversity of the Baltic Sea and that they need protection. Some years ago, the environmentalist organization Lithuanian Fund for Nature set out to find a

Across the Baltic coastal fishermen such as the one pictured suffer from seal predation. The animals damage nets and other gear and eat the fish or scare them away.

compromise between fishermen and seals. It studied the scope of fishermenâ&#x20AC;&#x2122;s losses caused by seals and provided recommendations regarding the payment of compensation, which is supported by the European Maritime and Fisheries Fund.

marine mammals and birds was launched at the beginning of 2016. For damages caused between 2014 and 2016 EUR281,000 has been paid in compensation to 78 fishermen. The goal of providing fishermen with compensation for losses caused by marine mammals and birds is to help foster traditional coastal businesses and maintain its economic viability as well as to ensure the sustainability of coastal and open-water fishing. 

Paying compensation to fishermen for seal damage has proved to be probably the only way to end this battle between fishermen and seals. After introducing this type of compensation, the number of seals washed up on the coast decreased despite the fact that their population was increasing. A few years ago, the population of grey seals was about 28,000, and now the number has increased to around 30,000. &VSPlTI ).)A05,  

Featuring Poland and Lithuania, this issue also looks at insurance in aquaculture and the fisheries section looks at how IUU fishing is thre...

Featuring Poland and Lithuania, this issue also looks at insurance in aquaculture and the fisheries section looks at how IUU fishing is thre...