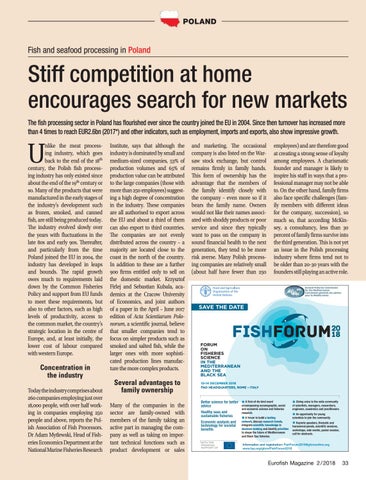 Fish and seafood processing in Poland

Stiff competition at home encourages search for new markets The ďŹ sh processing sector in Poland has ďŹ&amp;#x201A;ourished ever since the country joined the EU in 2004. Since then turnover has increased more than 4 times to reach EUR2.6bn (2017*) and other indicators, such as employment, imports and exports, also show impressive growth.

nlike the meat processing industry, which goes back to the end of the 18th century, the Polish fish processing industry has only existed since about the end of the 19th century or so. Many of the products that were manufactured in the early stages of the industryâ&amp;#x20AC;&amp;#x2122;s development such as frozen, smoked, and canned fish, are still being produced today. The industry evolved slowly over the years with fluctuations in the late 80s and early 90s. Thereafter, and particularly from the time Poland joined the EU in 2004, the industry has developed in leaps and bounds. The rapid growth owes much to requirements laid down by the Common Fisheries Policy and support from EU funds to meet these requirements, but also to other factors, such as high levels of productivity, access to the common market, the countryâ&amp;#x20AC;&amp;#x2122;s strategic location in the centre of Europe, and, at least initially, the lower cost of labour compared with western Europe.

Institute, says that although the industry is dominated by small and medium-sized companies, 53ď&amp;#x2122;&amp;#x201A; of production volumes and 65ď&amp;#x2122;&amp;#x201A; of production value can be attributed to the large companies (those with more than 250 employees) suggesting a high degree of concentration in the industry. These companies are all authorised to export across the EU and about a third of them can also export to third countries. The companies are not evenly distributed across the country â&amp;#x20AC;&amp;#x201C; a majority are located close to the coast in the north of the country. In addition to these are a further 900 firms entitled only to sell on the domestic market. Krzysztof Firlej and Sebastian Kubala, academics at the Cracow University of Economics, and joint authors of a paper in the April â&amp;#x20AC;&amp;#x201C; June 2017 edition of Acta Scientiarum Polonorum, a scientific journal, believe that smaller companies tend to focus on simpler products such as smoked and salted fish, while the larger ones with more sophisticated production lines manufacture the more complex products.

and marketing. The occasional company is also listed on the Warsaw stock exchange, but control remains firmly in family hands. This form of ownership has the advantage that the members of the family identify closely with the company â&amp;#x20AC;&amp;#x201C; even more so if it bears the family name. Owners would not like their names associated with shoddy products or poor service and since they typically want to pass on the company in sound financial health to the next generation, they tend to be more risk averse. Many Polish processing companies are relatively small (about half have fewer than 250

FORUM ON FISHERIES SCIENCE IN THE MEDITERRANEAN AND THE BLACK SEA

WITH THE FINANCIAL SUPPORT OF

employees) and are therefore good at creating a strong sense of loyalty among employees. A charismatic founder and manager is likely to inspire his staff in ways that a professional manager may not be able to. On the other hand, family firms also face specific challenges (family members with different ideas for the company, succession), so much so, that according McKinsey, a consultancy, less than 30 percent of family firms survive into the third generation. This is not yet an issue in the Polish processing industry where firms tend not to be older than 20-30 years with the founders still playing an active role.

Featuring Poland and Lithuania, this issue also looks at insurance in aquaculture and the fisheries section looks at how IUU fishing is threatening sustainable fishing.