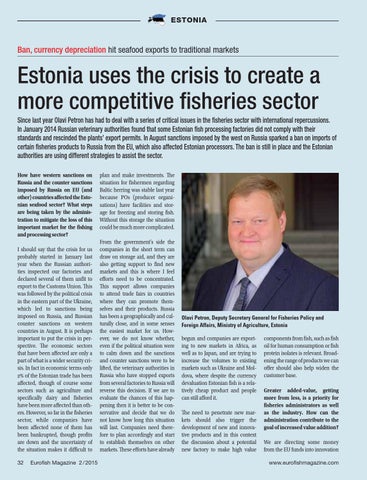 Estonia uses the crisis to create a more competitive ﬁsheries sector Since last year Olavi Petron has had to deal with a series of critical issues in the ﬁsheries sector with international repercussions. In January 2014 Russian veterinary authorities found that some Estonian ﬁsh processing factories did not comply with their standards and rescinded the plants’ export permits. In August sanctions imposed by the west on Russia sparked a ban on imports of certain ﬁsheries products to Russia from the EU, which also affected Estonian processors. The ban is still in place and the Estonian authorities are using different strategies to assist the sector. How have western sanctions on Russia and the counter sanctions imposed by Russia on EU (and other) countries affected the Estonian seafood sector? What steps are being taken by the administration to mitigate the loss of this important market for the fishing and processing sector? I should say that the crisis for us probably started in January last year when the Russian authorities inspected our factories and declared several of them unfit to export to the Customs Union. This was followed by the political crisis in the eastern part of the Ukraine, which led to sanctions being imposed on Russia, and Russian counter sanctions on western countries in August. It is perhaps important to put the crisis in perspective. The economic sectors that have been affected are only a part of what is a wider security crisis. In fact in economic terms only 2 of the Estonian trade has been affected, though of course some sectors such as agriculture and specifically dairy and fisheries have been more affected than others. However, so far in the fisheries sector, while companies have been affected none of them has been bankrupted, though profits are down and the uncertainty of the situation makes it difficult to 32

plan and make investments. The situation for fishermen regarding Baltic herring was stable last year because POs (producer organisations) have facilities and storage for freezing and storing fish. Without this storage the situation could be much more complicated. From the government’s side the companies in the short term can draw on storage aid, and they are also getting support to find new markets and this is where I feel efforts need to be concentrated. This support allows companies to attend trade fairs in countries where they can promote themselves and their products. Russia has been a geographically and culturally close, and in some senses the easiest market for us. However, we do not know whether, even if the political situation were to calm down and the sanctions and counter sanctions were to be lifted, the veterinary authorities in Russia who have stopped exports from several factories to Russia will reverse this decision. If we are to evaluate the chances of this happening then it is better to be conservative and decide that we do not know how long this situation will last. Companies need therefore to plan accordingly and start to establish themselves on other markets. These efforts have already

begun and companies are exporting to new markets in Africa, as well as to Japan, and are trying to increase the volumes to existing markets such as Ukraine and Moldova, where despite the currency devaluation Estonian fish is a relatively cheap product and people can still afford it. The need to penetrate new markets should also trigger the development of new and innovative products and in this context the discussion about a potential new factory to make high value

components from fish, such as fish oil for human consumption or fish protein isolates is relevant. Broadening the range of products we can offer should also help widen the customer base. Greater added-value, getting more from less, is a priority for fisheries administrators as well as the industry. How can the administration contribute to the goal of increased value addition? We are directing some money from the EU funds into innovation www.eurofishmagazine.com

Featuring Estonia this issue also previews the Seafood Expo Global and the aquaculture section looks at alternatives to fishmeal and fish oi...

Featuring Estonia this issue also previews the Seafood Expo Global and the aquaculture section looks at alternatives to fishmeal and fish oi...