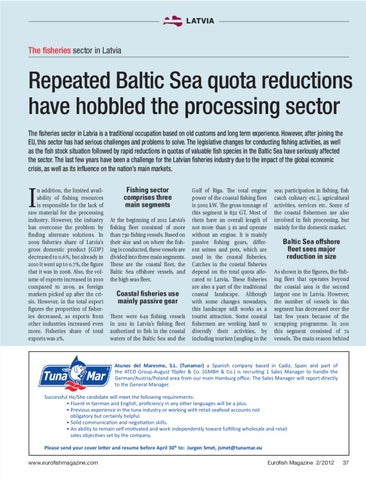 The ﬁsheries sector in Latvia

Repeated Baltic Sea quota reductions have hobbled the processing sector The ﬁsheries sector in Latvia is a traditional occupation based on old customs and long term experience. However, after joining the EU, this sector has had serious challenges and problems to solve. The legislative changes for conducting ﬁshing activities, as well as the ﬁsh stock situation followed by rapid reductions in quotas of valuable ﬁsh species in the Baltic Sea have seriously affected the sector. The last few years have been a challenge for the Latvian ﬁsheries industry due to the impact of the global economic crisis, as well as its inﬂuence on the nation’s main markets.

n addition, the limited availability of fishing resources is responsible for the lack of raw material for the processing industry. However, the industry has overcome the problem by finding alternate solutions. In 2009 fisheries share of Latvia’s gross domestic product (GDP) decreased to 0.6, but already in 2010 it went up to 0.7, the figure that it was in 2008. Also, the volume of exports increased in 2010 compared to 2009, as foreign markets picked up after the crisis. However, in the total export figures the proportion of fisheries decreased, as exports from other industries increased even more. Fisheries share of total exports was 2.

Fishing sector comprises three main segments At the beginning of 2012 Latvia’s fishing fleet consisted of more than 730 fishing vessels. Based on their size and on where the fishing is conducted, these vessels are divided into three main segments. These are the coastal fleet, the Baltic Sea offshore vessels, and the high seas fleet.

Gulf of Riga. The total engine power of the coastal fishing fleet is 5002 kW. The gross tonnage of this segment is 832 GT. Most of them have an overall length of not more than 5 m and operate without an engine. It is mainly passive fishing gears, different seines and pots, which are used in the coastal fisheries. Catches in the coastal fisheries depend on the total quota allocated to Latvia. These fisheries are also a part of the traditional coastal landscape. Although with some changes nowadays, this landscape still works as a tourist attraction. Some coastal fishermen are working hard to diversify their activities, by including tourism (angling in the

sea; participation in fishing, fish catch culinary etc.), agricultural activities, services etc. Some of the coastal fishermen are also involved in fish processing, but mainly for the domestic market.

Baltic Sea offshore fleet sees major reduction in size As shown in the figures, the fishing fleet that operates beyond the coastal area is the second largest one in Latvia. However, the number of vessels in this segment has decreased over the last few years because of the scrapping programme. In 2011 this segment consisted of 74 vessels. The main reason behind

Covering Latvia and the ESE in Brussels this issue also looks at the universal coolant, ice

Covering Latvia and the ESE in Brussels this issue also looks at the universal coolant, ice