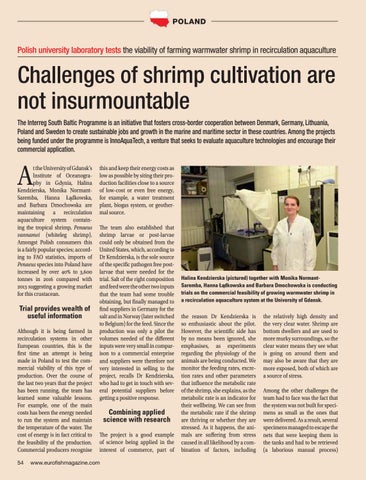 Challenges of shrimp cultivation are not insurmountable The Interreg South Baltic Programme is an initiative that fosters cross-border cooperation between Denmark, Germany, Lithuania, Poland and Sweden to create sustainable jobs and growth in the marine and maritime sector in these countries. Among the projects being funded under the programme is InnoAquaTech, a venture that seeks to evaluate aquaculture technologies and encourage their commercial application.

t the University of Gdanskâ&amp;#x20AC;&amp;#x2122;s Institute of Oceanography in Gdynia, Halina Kendzierska, Monika NormantSaremba, Hanna Ĺ aîżądkowska, and Barbara Dmochowska are maintaining a recirculation aquaculture system containing the tropical shrimp, Penaeus vannamei (whiteleg shrimp). Amongst Polish consumers this is a fairly popular species; according to FAO statistics, imports of Penaeus species into Poland have increased by over 40ď&amp;#x2122;&amp;#x201A; to 3,600 tonnes in 2016 compared with 2013 suggesting a growing market for this crustacean.

Trial provides wealth of useful information Although it is being farmed in recirculation systems in other European countries, this is the first time an attempt is being made in Poland to test the commercial viability of this type of production. Over the course of the last two years that the project has been running, the team has learned some valuable lessons. For example, one of the main costs has been the energy needed to run the system and maintain the temperature of the water. The cost of energy is in fact critical to the feasibility of the production. Commercial producers recognise 54

this and keep their energy costs as low as possible by siting their production facilities close to a source of low-cost or even free energy, for example, a water treatment plant, biogas system, or geothermal source. The team also established that shrimp larvae or post-larvae could only be obtained from the United States, which, according to Dr Kendzierska, is the sole source of the specific pathogen free postlarvae that were needed for the trial. Salt of the right composition and feed were the other two inputs that the team had some trouble obtaining, but finally managed to find suppliers in Germany for the salt and in Norway (later switched to Belgium) for the feed. Since the production was only a pilot the volumes needed of the different inputs were very small in comparison to a commercial enterprise and suppliers were therefore not very interested in selling to the project, recalls Dr Kendzierska, who had to get in touch with several potential suppliers before getting a positive response.

Combining applied science with research The project is a good example of science being applied in the interest of commerce, part of

Halina Kendzierska (pictured) together with Monika NormantSaremba, Hanna Ĺ aË&amp;#x203A;dkowska and Barbara Dmochowska is conducting trials on the commercial feasibility of growing warmwater shrimp in a recirculation aquaculture system at the University of Gdansk.

the reason Dr Kendzierska is so enthusiastic about the pilot. However, the scientific side has by no means been ignored, she emphasises, as experiments regarding the physiology of the animals are being conducted. We monitor the feeding rates, excretion rates and other parameters that influence the metabolic rate of the shrimp, she explains, as the metabolic rate is an indicator for their wellbeing. We can see from the metabolic rate if the shrimp are thriving or whether they are stressed. As it happens, the animals are suffering from stress caused in all likelihood by a combination of factors, including

the relatively high density and the very clear water. Shrimp are bottom dwellers and are used to more murky surroundings, so the clear water means they see what is going on around them and may also be aware that they are more exposed, both of which are a source of stress. Among the other challenges the team had to face was the fact that the system was not built for specimens as small as the ones that were delivered. As a result, several specimens managed to escape the nets that were keeping them in the tanks and had to be retrieved (a laborious manual process)

Featuring Hungary and Poland, this issue also looks at how coastal wetlands are effective carbon sinks.