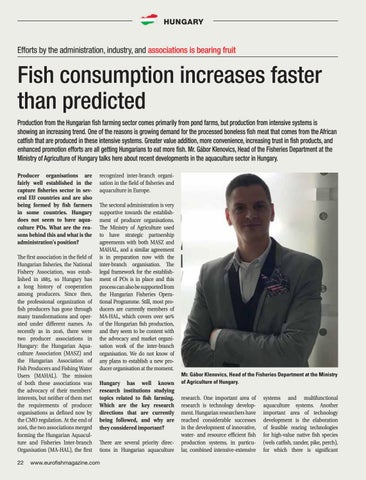 Efforts by the administration, industry, and associations is bearing fruit

Fish consumption increases faster than predicted Production from the Hungarian ďŹ sh farming sector comes primarily from pond farms, but production from intensive systems is showing an increasing trend. One of the reasons is growing demand for the processed boneless ďŹ sh meat that comes from the African catďŹ sh that are produced in these intensive systems. Greater value addition, more convenience, increasing trust in ďŹ sh products, and enhanced promotion efforts are all getting Hungarians to eat more ďŹ sh. Mr. GĂĄbor Klenovics, Head of the Fisheries Department at the Ministry of Agriculture of Hungary talks here about recent developments in the aquaculture sector in Hungary. Producer organisations are fairly well established in the capture fisheries sector in several EU countries and are also being formed by fish farmers in some countries. Hungary does not seem to have aquaculture POs. What are the reasons behind this and what is the administrationâ&amp;#x20AC;&amp;#x2122;s position? The first association in the field of Hungarian fisheries, the National Fishery Association, was established in 1885, so Hungary has a long history of cooperation among producers. Since then, the professional organization of fish producers has gone through many transformations and operated under different names. As recently as in 2016, there were two producer associations in Hungary: the Hungarian Aquaculture Association (MASZ) and the Hungarian Association of Fish Producers and Fishing Water Users (MAHAL). The mission of both these associations was the advocacy of their membersâ&amp;#x20AC;&amp;#x2122; interests, but neither of them met the requirements of producer organisations as defined now by the CMO regulation. At the end of 2016, the two associations merged forming the Hungarian Aquaculture and Fisheries Inter-branch Organisation (MA-HAL), the first 22

recognized inter-branch organisation in the field of fisheries and aquaculture in Europe. The sectoral administration is very supportive towards the establishment of producer organisations. The Ministry of Agriculture used to have strategic partnership agreements with both MASZ and MAHAL, and a similar agreement is in preparation now with the inter-branch organisation. The legal framework for the establishment of POs is in place and this process can also be supported from the Hungarian Fisheries Operational Programme. Still, most producers are currently members of MA-HAL, which covers over 90ď&amp;#x2122;&amp;#x201A; of the Hungarian fish production, and they seem to be content with the advocacy and market organisation work of the inter-branch organisation. We do not know of any plans to establish a new producer organisation at the moment. Hungary has well known research institutions studying topics related to fish farming. Which are the key research directions that are currently being followed, and why are they considered important? There are several priority directions in Hungarian aquaculture

Mr. GĂĄbor Klenovics, Head of the Fisheries Department at the Ministry of Agriculture of Hungary.

systems and multifunctional aquaculture systems. Another important area of technology development is the elaboration of feasible rearing technologies for high-value native fish species (wels catfish, zander, pike, perch), for which there is significant

Featuring Hungary and Poland, this issue also looks at how coastal wetlands are effective carbon sinks.