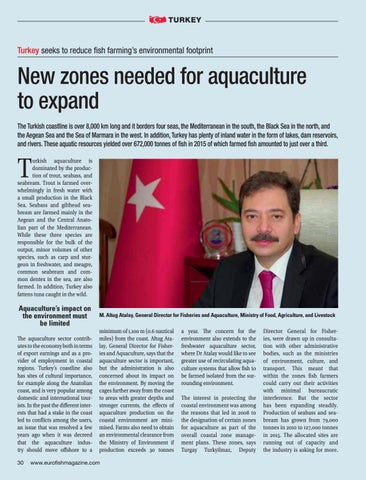 New zones needed for aquaculture toÂ expand The Turkish coastline is over 8,000 km long and it borders four seas, the Mediterranean in the south, the Black Sea in the north, and the Aegean Sea and the Sea of Marmara in the west. In addition, Turkey has plenty of inland water in the form of lakes, dam reservoirs, and rivers. These aquatic resources yielded over 672,000 tonnes of ďŹ sh in 2015 of which farmed ďŹ sh amounted to just over a third.

urkish aquaculture is dominated by the production of trout, seabass, and seabream. Trout is farmed overwhelmingly in fresh water with a small production in the Black Sea. Seabass and gilthead seabream are farmed mainly in the Aegean and the Central Anatolian part of the Mediterranean. While these three species are responsible for the bulk of the output, minor volumes of other species, such as carp and sturgeon in freshwater, and meagre, common seabream and common dentex in the sea, are also farmed. In addition, Turkey also fattens tuna caught in the wild.

Aquacultureâ&amp;#x20AC;&amp;#x2122;s impact on the environment must be limited The aquaculture sector contributes to the economy both in terms of export earnings and as a provider of employment in coastal regions. Turkeyâ&amp;#x20AC;&amp;#x2122;s coastline also has sites of cultural importance, for example along the Anatolian coast, and is very popular among domestic and international tourists. In the past the different interests that had a stake in the coast led to conflicts among the users, an issue that was resolved a few years ago when it was decreed that the aquaculture industry should move offshore to a 30

minimum of 1,100 m (0.6 nautical miles) from the coast. Altug Atalay, General Director for Fisheries and Aquaculture, says that the aquaculture sector is important, but the administration is also concerned about its impact on the environment. By moving the cages further away from the coast to areas with greater depths and stronger currents, the effects of aquaculture production on the coastal environment are minimised. Farms also need to obtain an environmental clearance from the Ministry of Environment if production exceeds 30 tonnes

a year. The concern for the environment also extends to the freshwater aquaculture sector, where Dr Atalay would like to see greater use of recirculating aquaculture systems that allow fish to be farmed isolated from the surrounding environment. The interest in protecting the coastal environment was among the reasons that led in 2008 to the designation of certain zones for aquaculture as part of the overall coastal zone management plans. These zones, says Turgay Turkyilmaz, Deputy

Director General for Fisheries, were drawn up in consultation with other administrative bodies, such as the ministries of environment, culture, and transport. This meant that within the zones fish farmers could carry out their activities with minimal bureaucratic interference. But the sector has been expanding steadily. Production of seabass and seabream has grown from 79,000 tonnes in 2010 to 127,000 tonnes in 2015. The allocated sites are running out of capacity and the industry is asking for more.

Covering Turkey and Norway as our country profiles this issue also looks at metal detection in the processing industry while aquaculture is visits a Moldovan sturgeon farm.