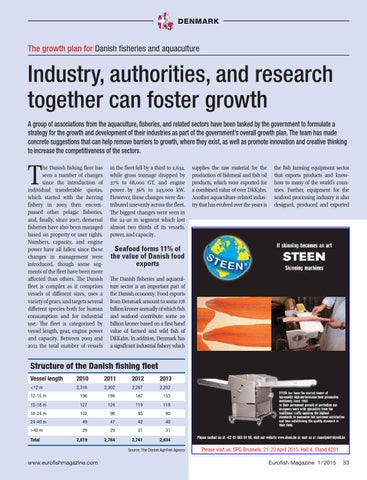 The growth plan for Danish fisheries and aquaculture

Industry, authorities, and research together can foster growth A group of associations from the aquaculture, ﬁsheries, and related sectors have been tasked by the government to formulate a strategy for the growth and development of their industries as part of the government’s overall growth plan. The team has made concrete suggestions that can help remove barriers to growth, where they exist, as well as promote innovation and creative thinking to increase the competitiveness of the sectors.

he Danish fishing fleet has seen a number of changes since the introduction of individual transferable quotas, which started with the herring fishery in 2003 then encompassed other pelagic fisheries, and, finally, since 2007, demersal fisheries have also been managed based on property or user rights. Numbers, capacity, and engine power have all fallen since these changes in management were introduced, though some segments of the fleet have been more affected than others. The Danish fleet is complex as it comprises vessels of different sizes, uses a variety of gears, and targets several different species both for human consumption and for industrial use. The fleet is categorised by vessel length, gear, engine power and capacity. Between 2003 and 2013 the total number of vessels

in the fleet fell by a third to 2,634, while gross tonnage dropped by 37 to 68,000 GT, and engine power by 36 to 243,000 kW. However, these changes were distributed unevenly across the fleet. The biggest changes were seen in the 24-40 m segment which lost almost two thirds of its vessels, power, and capacity.

supplies the raw material for the production of fishmeal and fish oil products, which were exported for a combined value of over DKK3bn. Another aquaculture-related industry that has evolved over the years is

the fish farming equipment sector that exports products and knowhow to many of the world’s countries. Further, equipment for the seafood processing industry is also designed, produced and exported

Seafood forms 11% of the value of Danish food exports The Danish fisheries and aquaculture sector is an important part of the Danish economy. Food exports from Denmark amount to some 178 billion kroner annually of which fish and seafood contribute some 20 billion kroner based on a first hand value of farmed and wild fish of DKK4bn. In addition, Denmark has a significant industrial fishery which

Featuring Denmark as well as Bosnia and Herzegovina this issue also looks at making good use of water discharge from aquaculture.

Featuring Denmark as well as Bosnia and Herzegovina this issue also looks at making good use of water discharge from aquaculture.