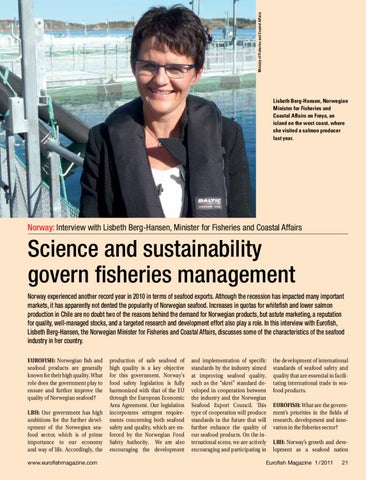 Ministry of Fisheries and Coastal Affairs

Lisbeth Berg-Hansen, Norwegian Minister for Fisheries and Coastal Affairs on Frøya, an island on the west coast, where she visited a salmon producer last year.

Science and sustainability govern fisheries management Norway experienced another record year in 2010 in terms of seafood exports. Although the recession has impacted many important markets, it has apparently not dented the popularity of Norwegian seafood. Increases in quotas for whitefish and lower salmon production in Chile are no doubt two of the reasons behind the demand for Norwegian products, but astute marketing, a reputation for quality, well-managed stocks, and a targeted research and development effort also play a role. In this interview with Eurofish, Lisbeth Berg-Hansen, the Norwegian Minister for Fisheries and Coastal Affairs, discusses some of the characteristics of the seafood industry in her country. EUROFISH: Norwegian fish and seafood products are generally known for their high quality. What role does the government play to ensure and further improve the quality of Norwegian seafood? LBH: Our government has high ambitions for the further devel­ opment of the Norwegian sea­ food sector, which is of prime importance to our economy and way of life. Accordingly, the www.eurofishmagazine.com

production of safe seafood of high quality is a key objective for this government. Norway’s food safety legislation is fully harmonized with that of the EU through the European Economic Area Agreement. Our legislation incorporates stringent require­ ments concerning both seafood safety and quality, which are en­ forced by the Norwegian Food Safety Authority. We are also encouraging the development

and implementation of specific standards by the industry aimed at improving seafood quality, such as the “skrei” standard de­ veloped in cooperation ­between the industry and the Norwegian Seafood Export Council. This type of cooperation will produce standards in the future that will further enhance the quality of our seafood products. On the in­ ternational scene, we are actively encouraging and participating in

the development of international standards of seafood safety and quality that are ­essential in facili­ tating international trade in sea­ food products. EUROFISH: What are the govern­ ment’s priorities in the fields of research, development and inno­ vation in the fisheries sector? LBH: Norway’s growth and deve­ lopment as a seafood nation

This Eurofish Magazine covers Norway and Russia and starts a new series on fraud in the seafood sector. Other topics covered are live fish t...

This Eurofish Magazine covers Norway and Russia and starts a new series on fraud in the seafood sector. Other topics covered are live fish t...