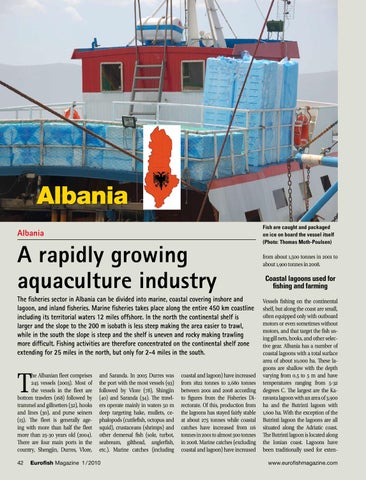 The fisheries sector in Albania can be divided into marine, coastal covering inshore and lagoon, and inland fisheries. Marine fisheries takes place along the entire 450 km coastline including its territorial waters 12 miles offshore. In the north the continental shelf is larger and the slope to the 200 m isobath is less steep making the area easier to trawl, while in the south the slope is steep and the shelf is uneven and rocky making trawling more difficult. Fishing activities are therefore concentrated on the continental shelf zone extending for 25 miles in the north, but only for 2-4 miles in the south.

he Albanian fleet comprises 245 vessels (2005). Most of the vessels in the fleet are bottom trawlers (168) followed by trammel and gillnetters (32), hooks and lines (30), and purse seiners (15). The fleet is generally ageing with more than half the fleet more than 25-30 years old (2004). There are four main ports in the country, Shengjin, Durres, Vlore,

and Saranda. In 2005 Durres was the port with the most vessels (93) followed by Vlore (78), Shingjin (40) and Saranda (34). The trawlers operate mainly in waters 50 m deep targeting hake, mullets, cephalopods (cuttlefish, octopus and squid), crustaceans (shrimps) and other demersal fish (sole, turbot, seabream, gilthead, anglerfish, etc.). Marine catches (including

Fish are caught and packaged on ice on board the vessel itself (Photo: Thomas Moth-Poulsen)

Coastal lagoons used for fishing and farming Vessels fishing on the continental shelf, but along the coast are small, often equipped only with outboard motors or even sometimes without motors, and that target the fish using gill nets, hooks, and other selective gear. Albania has a number of coastal lagoons with a total surface area of about 10,000 ha. These lagoons are shallow with the depth varying from 0.5 to 5 m and have temperatures ranging from 5-32 degrees C. The largest are the Karavasta lagoon with an area of 3,900 ha and the Butrinti lagoon with 1,600 ha. With the exception of the Butrinti lagoon the lagoons are all situated along the Adriatic coast. The Butrinti lagoon is located along the Ionian coast. Lagoons have been traditionally used for extenwww.eurofishmagazine.com