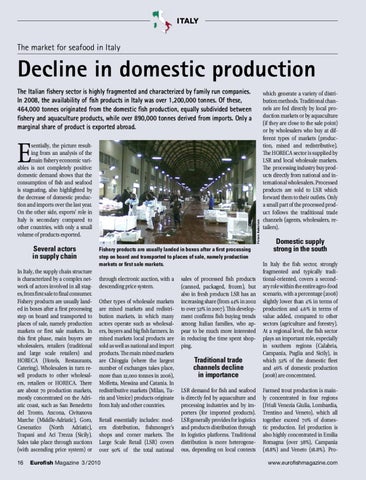 The market for seafood in Italy

Decline in domestic production The Italian fishery sector is highly fragmented and characterized by family run companies. In 2008, the availability of fish products in Italy was over 1,200,000 tonnes. Of these, 464,000 tonnes originated from the domestic fish production, equally subdivided between fishery and aquaculture products, while over 890,000 tonnes derived from imports. Only a marginal share of product is exported abroad.

Several actors in supply chain In Italy, the supply chain structure is characterized by a complex network of actors involved in all stages, from first sale to final consumer. Fishery products are usually landed in boxes after a first processing step on board and transported to places of sale, namely production markets or first sale markets. In this first phase, main buyers are wholesalers, retailers (traditional and large scale retailers) and HORECA (Hotels, Restaurants, Catering). Wholesalers in turn resell products to other wholesalers, retailers or HORECA. There are about 70 production markets, mostly concentrated on the Adriatic coast, such as San Benedetto del Tronto, Ancona, Civitanova Marche (Middle-Adriatic), Goro, Cesenatico (North Adriatic), Trapani and Aci Trezza (Sicily). Sales take place through auctions (with ascending price system) or

sentially, the picture resulting from an analysis of the main fishery economic variables is not completely positive: domestic demand shows that the consumption of fish and seafood is stagnating, also highlighted by the decrease of domestic production and imports over the last year. On the other side, exports’ role in Italy is secondary compared to other countries, with only a small volume of products exported. Fishery products are usually landed in boxes after a first processing step on board and transported to places of sale, namely production markets or first sale markets.

through electronic auction, with a descending price system. Other types of wholesale markets are mixed markets and redistribution markets, in which many actors operate such as wholesalers, buyers and big fish farmers. In mixed markets local products are sold as well as national and import products. The main mixed markets are Chioggia (where the largest number of exchanges takes place, more than 12,000 tonnes in 2006), Molfetta, Messina and Catania. In redistributive markets (Milan, Turin and Venice) products originate from Italy and other countries. Retail essentially includes: modern distribution, fishmonger’s shops and corner markets. The Large Scale Retail (LSR) covers over 90% of the total national

which generate a variety of distribution methods. Traditional channels are fed directly by local production markets or by aquaculture (if they are close to the sale point) or by wholesalers who buy at different types of markets (production, mixed and redistributive). The HORECA sector is supplied by LSR and local wholesale markets. The processing industry buy products directly from national and international wholesalers. Processed products are sold to LSR which forward them to their outlets. Only a small part of the processed product follows the traditional trade channels (agents, wholesalers, retailers).

Domestic supply strong in the south

In Italy the fish sector, strongly fragmented and typically traditional-oriented, covers a secondary role within the entire agro-food scenario, with a percentage (2008) slightly lower than 4% in terms of production and 4.6% in terms of value added, compared to other sectors (agriculture and forestry). At a regional level, the fish sector plays an important role, especially in southern regions (Calabria, Campania, Puglia and Sicily), in which 52% of the domestic fleet and 46% of domestic production (2008) are concentrated.

LSR demand for fish and seafood is directly fed by aquaculture and processing industries and by importers (for imported products). LSR generally provides for logistics and products distribution through its logistics platforms. Traditional distribution is more heterogeneous, depending on local contexts

sales of processed fish products (canned, packaged, frozen), but also in fresh products LSR has an increasing share (from 44% in 2002 to over 52% in 2007). This development confirms fish buying trends among Italian families, who appear to be much more interested in reducing the time spent shopping.