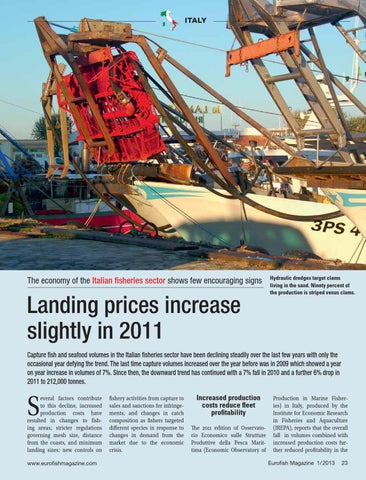 Landing prices increase slightly in 2011 Capture ﬁsh and seafood volumes in the Italian ﬁsheries sector have been declining steadily over the last few years with only the occasional year defying the trend. The last time capture volumes increased over the year before was in 2009 which showed a year on year increase in volumes of 7%. Since then, the downward trend has continued with a 7% fall in 2010 and a further 6% drop in 2011 to 212,000 tonnes.

fishery activities from capture to sales and sanctions for infringements; and changes in catch composition as fishers targeted different species in response to changes in demand from the market due to the economic crisis.

Production in Marine Fisheries) in Italy, produced by the Institute for Economic Research in Fisheries and Aquaculture (IREPA), reports that the overall fall in volumes combined with increased production costs further reduced profitability in the Eurofish Magazine 1/ 2013