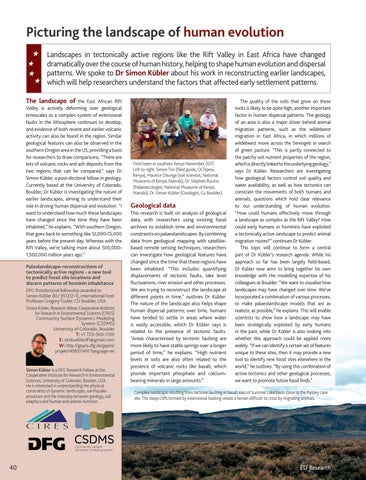 Picturing the landscape of human evolution Landscapes in tectonically active regions like the Rift Valley in East Africa have changed dramatically over the course of human history, helping to shape human evolution and dispersal patterns. We spoke to Dr Simon Kübler about his work in reconstructing earlier landscapes, which will help researchers understand the factors that affected early settlement patterns. The landscape of the East African Rift Valley is actively deforming over geological timescales as a complex system of extensional faults in the lithosphere continues to develop, and evidence of both recent and earlier volcanic activity can also be found in the region. Similar geological features can also be observed in the southern Oregon area in the US, providing a basis for researchers to draw comparisons. “There are lots of volcanic rocks and ash deposits from the two regions that can be compared,” says Dr Simon Kübler, a post-doctoral fellow in geology. Currently based at the University of Colorado, Boulder, Dr Kübler is investigating the nature of earlier landscapes, aiming to understand their role in driving human dispersal and evolution. “I want to understand how much these landscapes have changed since the time they have been inhabited,” he explains. “With southern Oregon, that goes back to something like 12,000-15,000 years before the present day. Whereas with the Rift Valley, we’re talking more about 500,0001,500,000 million years ago.” Paleolandscape-reconstructions of tectonically active regions - a new tool to predict fossil site locations and discern patterns of hominin inhabitance DFG Postdoctoral fellowship awarded to Simon Kübler (KU 3512/2-1), international host Professor Gregory Tucker, CU Boulder, USA. Simon Kübler, Research fellow, Cooperative Institute for Research in Environmental Sciences (CIRES) Community Surface Dynamics Modeling System (CSDMS) University of Colorado, Boulder T: +1 720-569-1100 E: simkuebler81@gmail.com W: http://gepris.dfg.de/gepris/ projekt/408311491?language=en

Simon Kübler is a DFG Research Fellow at the Cooperative Institute for Research in Environmental Sciences, University of Colorado, Boulder, USA. He is interested in understanding the physical constraints of dynamic landscapes, earthquake processes and the interplay between geology, soil edaphics and human and animal nutrition.

Geological data This research is built on analysis of geological data, with researchers using existing fossil archives to establish time and environmental constraints on palaeolandscapes. By combining data from geological mapping with satellitebased remote sensing techniques, researchers can investigate how geological features have changed since the time that these regions have been inhabited. “This includes quantifying displacements of tectonic faults, lake level fluctuations, river erosion and other processes. We are trying to reconstruct the landscape at different points in time,” outlines Dr Kübler. The nature of the landscape also helps shape human dispersal patterns; over time, humans have tended to settle in areas where water is easily accessible, which Dr Kübler says is related to the presence of tectonic faults. “Areas characterised by tectonic faulting are more likely to have stable springs over a longer period of time,” he explains. “High nutrient levels in soils are also often related to the presence of volcanic rocks like basalt, which provide important phosphate and calciumbearing minerals in large amounts.”

The quality of the soils that grow on these rocks is likely to be quite high, another important factor in human dispersal patterns. The geology of an area is also a major driver behind animal migration patterns, such as the wildebeest migration in East Africa, in which millions of wildebeest move across the Serengeti in search of green pasture. “This is partly connected to the patchy soil nutrient properties of the region, which is directly linked to the underlying geology,” says Dr Kübler. Researchers are investigating how geological factors control soil quality and water availability, as well as how tectonics can constrain the movements of both humans and animals, questions which hold clear relevance to our understanding of human evolution. “How could humans effectively move through a landscape as complex as the Rift Valley? How could early humans or hominins have exploited a tectonically active landscape to predict animal migration routes?” continues Dr Kübler. This topic will continue to form a central part of Dr Kübler’s research agenda. While his approach so far has been largely field-based, Dr Kübler now aims to bring together his own knowledge with the modelling expertise of his colleagues at Boulder. “We want to visualise how landscapes may have changed over time. We’ve incorporated a combination of various processes, to make palaeolandscape models that are as realistic as possible,” he explains. This will enable scientists to show how a landscape may have been strategically exploited by early humans in the past, while Dr Kübler is also looking into whether this approach could be applied more widely. “If we can identify a certain set of features unique to these sites, then it may provide a new tool to identify new fossil sites elsewhere in the world,” he outlines. “By using this combination of active tectonics and other geological processes, we want to promote future fossil finds.”

Landscapes in tectonically active regions have changed dramatically over the course of human history. We spoke to Dr. Simon Kuebler about his work in reconstructing earlier landscapes, which will help researchers understand the factors that affected early settlement patterns