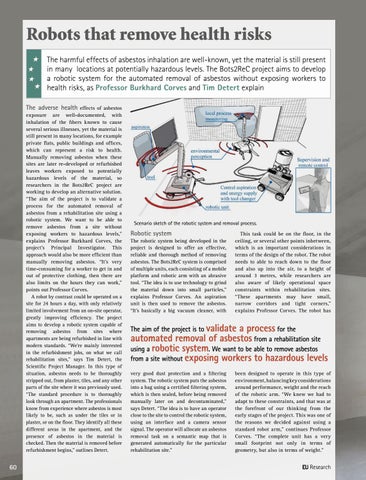 Robots that remove health risks The harmful effects of asbestos inhalation are well-known, yet the material is still present in many locations at potentially hazardous levels. The Bots2ReC project aims to develop a robotic system for the automated removal of asbestos without exposing workers to health risks, as Professor Burkhard Corves and Tim Detert explain The adverse health

effects of asbestos exposure are well-documented, with inhalation of the fibers known to cause several serious illnesses, yet the material is still present in many locations, for example private flats, public buildings and offices, which can represent a risk to health. Manually removing asbestos when these sites are later re-developed or refurbished leaves workers exposed to potentially hazardous levels of the material, so researchers in the Bots2ReC project are working to develop an alternative solution. “The aim of the project is to validate a process for the automated removal of asbestos from a rehabilitation site using a robotic system. We want to be able to remove asbestos from a site without exposing workers to hazardous levels,” explains Professor Burkhard Corves, the project’s Principal Investigator. This approach would also be more efficient than manually removing asbestos. “It’s very time-consuming for a worker to get in and out of protective clothing, then there are also limits on the hours they can work,” points out Professor Corves. A robot by contrast could be operated on a site for 24 hours a day, with only relatively limited involvement from an on-site operator, greatly improving efficiency. The project aims to develop a robotic system capable of removing asbestos from sites where apartments are being refurbished in line with modern standards. “We’re mainly interested in the refurbishment jobs, on what we call rehabilitation sites,” says Tim Detert, the Scientific Project Manager. In this type of situation, asbestos needs to be thoroughly stripped out, from plaster, tiles, and any other parts of the site where it was previously used. “The standard procedure is to thoroughly look through an apartment. The professionals know from experience where asbestos is most likely to be, such as under the tiles or in plaster, or on the floor. They identify all these different areas in the apartment, and the presence of asbestos in the material is checked. Then the material is removed before refurbishment begins,” outlines Detert.

Scenario sketch of the robotic system and removal process.

Robotic system The robotic system being developed in the project is designed to offer an effective, reliable and thorough method of removing asbestos. The Bots2ReC system is comprised of multiple units, each consisting of a mobile platform and robotic arm with an abrasive tool. “The idea is to use technology to grind the material down into small particles,” explains Professor Corves. An aspiration unit is then used to remove the asbestos. “It’s basically a big vacuum cleaner, with

This task could be on the floor, in the ceiling, or several other points inbetween, which is an important considerations in terms of the design of the robot. The robot needs to able to reach down to the floor and also up into the air, to a height of around 3 metres, while researchers are also aware of likely operational space constraints within rehabilitation sites. “These apartments may have small, narrow corridors and tight corners,” explains Professor Corves. The robot has

The aim of the project is to validate

a process for the automated removal of asbestos from a rehabilitation site using a robotic system. We want to be able to remove asbestos from a site without exposing workers to hazardous levels very good dust protection and a filtering system. The robotic system puts the asbestos into a bag using a certified filtering system, which is then sealed, before being removed manually later on and decontaminated,” says Detert. “The idea is to have an operator close to the site to control the robotic system, using an interface and a camera sensor signal. The operator will allocate an asbestos removal task on a semantic map that is generated automatically for the particular rehabilitation site.”

been designed to operate in this type of environment, balancing key considerations around performance, weight and the reach of the robotic arm. “We knew we had to adapt to these constraints, and that was at the forefront of our thinking from the early stages of the project. This was one of the reasons we decided against using a standard robot arm,” continues Professor Corves. “The complete unit has a very small footprint not only in terms of geometry, but also in terms of weight.”