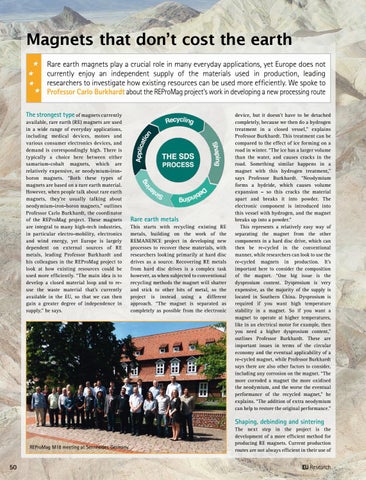 Magnets that don’t cost the earth Rare earth magnets play a crucial role in many everyday applications, yet Europe does not currently enjoy an independent supply of the materials used in production, leading researchers to investigate how existing resources can be used more efficiently. We spoke to Professor Carlo Burkhardt about the REProMag project’s work in developing a new processing route The strongest type of magnets currently available, rare earth (RE) magnets are used in a wide range of everyday applications, including medical devices, motors and various consumer electronics devices, and demand is correspondingly high. There is typically a choice here between either samarium-cobalt magnets, which are relatively expensive, or neodymium-ironboron magnets. “Both these types of magnets are based on a rare earth material. However, when people talk about rare earth magnets, they’re usually talking about neodymium-iron-boron magnets,” outlines Professor Carlo Burkhardt, the coordinator of the REProMag project. These magnets are integral to many high-tech industries, in particular electro-mobility, electronics and wind energy, yet Europe is largely dependent on external sources of RE metals, leading Professor Burkhardt and his colleagues in the REProMag project to look at how existing resources could be used more efficiently. “The main idea is to develop a closed material loop and to reuse the waste material that’s currently available in the EU, so that we can then gain a greater degree of independence in supply,” he says.

Rare earth metals This starts with recycling existing RE metals, building on the work of the REMANENCE project in developing new processes to recover these materials, with researchers looking primarily at hard disc drives as a source. Recovering RE metals from hard disc drives is a complex task however, as when subjected to conventional recycling methods the magnet will shatter and stick to other bits of metal, so the project is instead using a different approach. “The magnet is separated as completely as possible from the electronic

device, but it doesn’t have to be detached completely, because we then do a hydrogen treatment in a closed vessel,” explains Professor Burkhardt. This treatment can be compared to the effect of ice forming on a road in winter. “The ice has a larger volume than the water, and causes cracks in the road. Something similar happens in a magnet with this hydrogen treatment,” says Professor Burkhardt. “Neodymium forms a hydride, which causes volume expansion – so this cracks the material apart and breaks it into powder. The electronic component is introduced into this vessel with hydrogen, and the magnet breaks up into a powder.” This represents a relatively easy way of separating the magnet from the other components in a hard disc drive, which can then be re-cycled in the conventional manner, while researchers can look to use the re-cycled magnets in production. It’s important here to consider the composition of the magnet. “One big issue is the dysprosium content. Dysprosium is very expensive, as the majority of the supply is located in Southern China. Dysprosium is required if you want high temperature stability in a magnet. So if you want a magnet to operate at higher temperatures, like in an electrical motor for example, then you need a higher dysprosium content,” outlines Professor Burkhardt. These are important issues in terms of the circular economy and the eventual applicability of a re-cycled magnet, while Professor Burkhardt says there are also other factors to consider, including any corrosion on the magnet. “The more corroded a magnet the more oxidised the neodymium, and the worse the eventual performance of the recycled magnet,” he explains. “The addition of extra neodymium can help to restore the original performance.”

The next step in the project is the development of a more efficient method for producing RE magnets. Current production routes are not always efficient in their use of