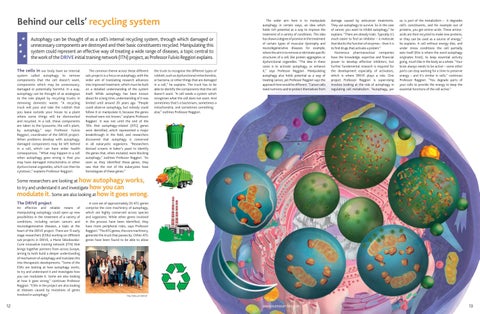 Behind our cells’ recycling system Autophagy can be thought of as a cell’s internal recycling system, through which damaged or unnecessary components are destroyed and their basic constituents recycled. Manipulating this system could represent an effective way of treating a wide range of diseases, a topic central to the work of the DRIVE initial training network (ITN) project, as Professor Fulvio Reggiori explains. The cells in our body have an internal system called autophagy to remove components that the cell doesn’t want, components which may be unnecessary, damaged or potentially harmful. In a way, autophagy can be thought of as analogous to the role played by recycling trucks in removing domestic waste. “A recycling truck will pass and take the rubbish that you leave outside your house to a plant where some things will be dismounted and recycled. In a cell, these components are taken to the lysosome, the cell’s plant, by autophagy,” says Professor Fulvio Reggiori, coordinator of the DRIVE project. When problems develop with autophagy, damaged components may be left behind in a cell, which can have wider health consequences. “What may happen in a cell when autophagy goes wrong is that you may have damaged mitochondria or other dysfunctional organelles, which can then be cytotoxic,” explains Professor Reggiori.

The common theme across these different sub-projects is a focus on autophagy, with the wider aim of translating research advances into improved treatment, which must be built on a detailed understanding of the system itself. While autophagy has been known about for a long time, understanding of it was limited until around 20 years ago. “People could observe autophagy, but nobody could follow it or manipulate it, because the genes involved were not known,” explains Professor Reggiori. It was not until the end of the ‘90s that autophagy-related (ATG) genes were identified, which represented a major breakthrough in the field, and researchers discovered that autophagy is conserved in all eukaryotic organisms. “Researchers devised screens in baker’s yeast to identify the genes that, when mutated, were blocking autophagy,” outlines Professor Reggiori. “As soon as they identified these genes, they saw that the rest of the eukaryotes have homologues of these genes.”

the truck to recognise the different types of rubbish, such as dysfunctional mitochondria, or bacteria, or other things that are damaged in a cell,” he explains. The truck has to be able to identify the components that the cell doesn’t want. “A cell needs a system which recognises what the cell does not want. And sometimes that’s a bacterium, sometimes a mitochondria, and sometimes something else,” outlines Professor Reggiori.

The wider aim here is to manipulate autophagy in certain ways, an idea which holds rich potential as a way to improve the treatment of a variety of conditions. This idea has shown a degree of promise in the treatment of certain types of muscular dystrophy and neurodegenerative diseases for example, where the aim is to remove or eliminate specific structures of a cell, like protein aggregates or dysfunctional organelles. “The idea in these cases is to activate autophagy, or enhance it,” says Professor Reggiori. Manipulating autophagy also holds potential as a way of treating cancer, yet Professor Reggiori says the approach here would be different. “Cancer cells need nutrients and to protect themselves from

damage caused by anticancer treatments. They use autophagy to survive. So in the case of cancer, you want to inhibit autophagy,” he explains. “There are already trials. Typically it’s much easier to find an inhibitor – a molecule that blocks the function of enzymes – than it is to find drugs that activate a protein.” Numerous pharmaceutical companies have the knowledge, expertise and financial power to develop effective inhibitors, but further fundamental research is required for the development especially of activators, which is where DRIVE plays a role. One project Professor Reggiori is supervising involves looking at the role of autophagy in regulating cell metabolism. “Autophagy, per

se, is part of the metabolism – it degrades cell’s constituents, and for example out of proteins, you get amino-acids. These aminoacids are then recycled to make new proteins, or they can be used as a source of energy,” he explains. A cell without energy dies, and under stress conditions the cell partially eats itself (this is where the word autophagy originates from), to keep essential activity going, much like in the body as a whole. “Your brain always needs to be active – some other parts can stop working for a time to preserve energy – and it’s similar in cells,” continues Professor Reggiori. “You degrade parts of your cells to provide the energy to keep the essential functions of the cell active.”

A core set of approximately 20 ATG genes comprise the core machinery of autophagy, which are highly conserved across species and organisms. While other genes involved in the process have been identified, they have more peripheral roles, says Professor Reggiori. “The ATG genes, the core machinery, generate the truck that passes by. Other ATG genes have been found to be able to allow

The ESRs of DRIVE

Manipulating autophagy could represent an effective way of treating a wide range of diseases, a topic central to the work of the DRIVE initial training network (ITN) project, as Professor Fulvio Reggiori explains.