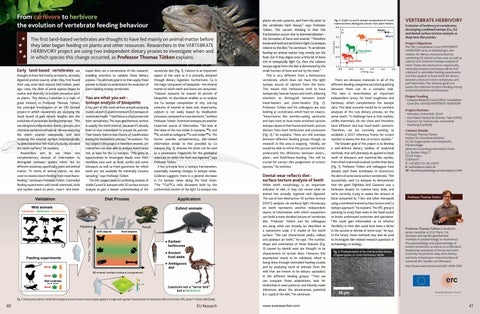 From carnivore to herbivore the evolution of vertebrate feeding behaviour The first land-based vertebrates are thought to have fed mainly on animal matter before they later began feeding on plants and other resources. Researchers in the VERTEBRATE HERBIVORY project are using two independent dietary proxies to investigate when and in which species this change occurred, as Professor Thomas Tütken explains. Early land-based vertebrates are thought to have fed mainly on insects, an easily digested protein source, when they first found their way onto land around 380 million years ago. Later, the diets of some species began to evolve and diversify to include resources such as plants. This dietary transition is a topic of great interest to Professor Thomas Tütken, the principal investigator of an ERC-funded project in which researchers are studying the fossil record to gain deeper insights into the evolution of vertebrate feeding behaviour. “We are using two independent dietary proxies, one chemical and one mechanical. We are analysing the tooth enamel isotopically and also studying the enamel surface microscopically to determine how the food physically abraded the tooth surface,” he explains. Researchers aim to use these two complementary sources of information to distinguish between species which fed on different resources, specifically plant and animal matter. “In terms of animal matter, we also want to resolve insect-feeding from meat/bonefeeding,” continues Professor Tütken. Controlled feeding experiments with small mammals, birds and reptiles raised on plant-, insect- and meatValidation

based diets are a cornerstone of this research, enabling scientists to validate these dietary proxies. The ultimate goal is to then apply these proxies to fossils to understand the evolution of plant-feeding among vertebrates.

You are what you eat isotope analysis of bioapatite A key part of this work centres around analysing stable calcium (Ca) and strontium (Sr) isotopes in vertebrate fossils. “Hard tissue is often preserved from vertebrates. The best geochemical archive is usually the tooth enamel, because it’s already been in vivo mineralised to around 96 percent. That means there is less chance of modification during the fossilisation process,” he outlines. The key target in the project is therefore enamel, yet researchers are also able to analyse fossil bones too, at least for the Ca isotopes. “This gives us opportunities to investigate fossils even from toothless taxa such as birds, turtles and some dinosaurs as well as from specimens for which teeth are not available for minimally invasive sampling,” says Professor Tütken. The ERC project team is combining analysis of stable Ca and Sr isotopes with 3D surface texture analysis to gain a deeper understanding of the

vertebrate diet (Fig. 1). Calcium is an important aspect of this work as it is primarily obtained through dietary ingestion. Furthermore, Ca is the major component of bioapatite - the mineral matter of which teeth and bones are comprised. “Calcium accounts for around 38 percent of bioapatite. Its abundance enables us to analyse the Ca isotope composition of tiny, sub-mg amounts of enamel or bone and, importantly, calcium is not easily biased by fossilisation processes, compared to trace elements,” outlines Professor Tütken. Strontium isotopes are another important source of information. “We look at the ratios of the two stable Sr isotopes, 88Sr and 86 Sr, as well as radiogenic 87Sr and stable 86Sr. The former provides complementary, diet-related information similar to that provided by Ca isotopes (Fig. 2), whereas the latter can be used as a provenance fingerprint for the geological substrate on which the food was ingested,” says Professor Tütken. A key principle here is isotope fractionation, essentially meaning changes in isotope ratios. Evidence suggests there is a general decrease in Ca isotope ratios along the food chain. “The 44Ca/42Ca ratio decreases both by the preferential transfer of the light Ca isotope into

plants via root systems, and from the plant to the vertebrate hard tissues,” says Professor Tütken. The current thinking is that this fractionation occurs due to biomineralisation the formation of bone and enamel. “Therefore bones and teeth are enriched in light Ca isotopes relative to the diet,” he continues. “A vertebrate feeding on animal matter may mostly eat the flesh, but if they digest even a little bit of bone rich in isotopically light Ca, then the calcium isotope signal from the diet is dominated by the small fraction of bone and not by the meat.” This is very different from a herbivorous vertebrate, which does not have this light isotope source of calcium from the bone. This means that herbivores tend to have isotopically heavier bones and teeth, allowing scientists to distinguish between bone/ meat-feeders and plant-feeders (Fig. 2). Professor Tütken and his colleagues are also looking at vertebrates which feed on insects. “Insectivores like termite-eating aardvarks and bats tend to have more enriched calcium isotope values in their bones and teeth, and are distinct from both herbivores and carnivores (Fig. 2),” he explains. There are still overlaps between different feeding groups though, so research in this area is ongoing. “Ideally, we would be able to refine this picture and better understand the difference between insect-, plant-, and flesh/bone-feeding. This will be crucial for correct diet assignment of extinct species,” he outlines.

Dental wear reflects diet surface texture analysis of teeth While tooth morphology is an important indicator of diet, it may not reveal what an animal has actually ingested and digested. The use of non-destructive 3D surface texture (3DST) analysis via confocal light microscopy on teeth represents another independent source of information with which researchers can build a more detailed picture of vertebrate diet. Professor Tütken and his colleagues are using what can broadly be described as a nanometre scale 3-D model of the tooth surface. “We can characterise peaks, valleys and plateaus on teeth,” he says. The number, shape and orientation of these features (Fig. 3) caused by dental wear are thought to be characteristic of certain diets. However, this assumption needs to be validated, which is being done through controlled feeding studies and by analysing teeth of animals from the wild that are known to be dietary specialists in the different feeding groups. “Then we can compare those adaptations, look for similarities in wear patterns, and thereby make inferences about the abrasiveness potential (i.e. type) of the diet,” he continues.

There are abrasive materials in all of the different feeding categories and distinguishing between them can be a complex task. This data is nevertheless an important independent proxy for food toughness and hardness, which complements the isotope data. The ideal scenario would be to combine analyses of the two dietary proxies, on the same tooth. “A challenge here is that reptiles, unlike mammals, do not chew and therefore have different and less food-tooth contacts. Therefore, we are currently working to establish a 3DST reference frame for extant reptiles to assess the diet of extinct reptiles.” The broader goal of the project is to develop a well-defined dietary toolbox of analytical methods, that will ultimately be applied to fossil teeth of dinosaurs and mammal-like reptiles, from which mammals evolved, to infer their diets (Fig. 1). Professor Tütken and colleagues have already used these techniques to reconstruct the diets of some iconic extinct vertebrates. “We successfully used Ca isotopes to demonstrate that the giant flightless bird Gastornis was a herbivore despite its massive bony beak, and we’re currently trying to assess the amount of bone consumed by T-Rex and other theropods using a combined enamel surface texture and Ca isotope approach,” he explains. The ERC group is planning to study food webs in the fossil record to better understand extinction and speciation. “We could gain information as to whether flexibility in their diet could have been a factor in the success or demise of some taxa,” he says. In the future, these methods may also be used to investigate diet-related research questions in archaeology or ecology. Fig. 3. Photosimulation of the enamel surface texture of Iguana iguana, an extant herbivorous reptile.

The ERC Consolidator Grant VERTEBRATE HERBIVORY aims at developing a new toolbox for dietary reconstructions by combining 3D dental surface wear as well as calcium and strontium isotope analysis of teeth. These non-destructive, respectively, minimally invasive techniques will be first validated in controlled feeding experiments and then applied to fossil teeth for dietary reconstructions of extinct vertebrates and past food webs. The ultimate goal is to assess the evolution of plant-feeding among mammal ancestors and dinosaurs.

Professor Thomas Tütken is academic senior councilor at JGU Mainz. He develops and applies geochemical methods in palaeontology to reconstruct the palaeobiology and palaeoecology of extinct vertebrates as well as to understand fossilization processes of bones and teeth. Currently he performs deep time dietary and body temperature reconstructions of mammal-like reptiles and dinosaurs. http://www.researcherid.com/rid/E-4988-2010

The first land-based vertebrates are thought to have fed mainly on animal matter before they later began feeding on plants and other resourc...

The first land-based vertebrates are thought to have fed mainly on animal matter before they later began feeding on plants and other resourc...