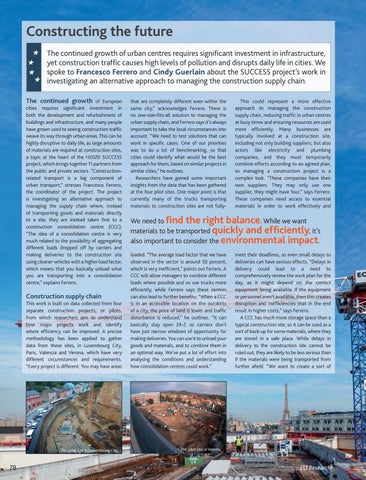 Constructing the future The continued growth of urban centres requires significant investment in infrastructure, yet construction traffic causes high levels of pollution and disrupts daily life in cities. We spoke to Francesco Ferrero and Cindy Guerlain about the SUCCESS project’s work in investigating an alternative approach to managing the construction supply chain. The continued growth of European cities requires significant investment in both the development and refurbishment of buildings and infrastructure, and many people have grown used to seeing construction traffic weave its way through urban areas. This can be highly disruptive to daily life, as large amounts of materials are required at construction sites, a topic at the heart of the H2020 SUCCESS project, which brings together 11 partners from the public and private sectors. “Constructionrelated transport is a big component of urban transport,” stresses Francesco Ferrero, the coordinator of the project. The project is investigating an alternative approach to managing the supply chain where, instead of transporting goods and materials directly to a site, they are instead taken first to a construction consolidation centre (CCC). “The idea of a consolidation centre is very much related to the possibility of aggregating different loads dropped off by carriers and making deliveries to the construction site using cleaner vehicles with a higher load factor, which means that you basically unload what you are transporting into a consolidation centre,” explains Ferrero. Construction supply chain This work is built on data collected from four separate construction projects, or pilots, from which researchers aim to understand how major projects work and identify where efficiency can be improved. A precise methodology has been applied to gather data from these sites, in Luxembourg City, Paris, Valencia and Verona, which have very different circumstances and requirements. “Every project is different. You may have areas

The pilot site in Luxembourg City.

that are completely different even within the same city,” acknowledges Ferrero. There is no one-size-fits-all solution to managing the urban supply chain, and Ferrero says it’s always important to take the local circumstances into account. “We need to test solutions that can work in specific cases. One of our priorities was to do a lot of benchmarking, so that cities could identify what would be the best approach for them, based on similar projects in similar cities,” he outlines. Researchers have gained some important insights from the data that has been gathered at the four pilot sites. One major point is that currently many of the trucks transporting materials to construction sites are not fully-

This could represent a more effective approach to managing the construction supply chain, reducing traffic in urban centres at busy times and ensuring resources are used more efficiently. Many businesses are typically involved at a construction site, including not only building suppliers, but also actors like electricity and plumbing companies, and they must temporarily combine efforts according to an agreed plan, so managing a construction project is a complex task. “These companies have their own suppliers. They may only use one supplier, they might have four,” says Ferrero. These companies need access to essential materials in order to work effectively and

We need to find the right balance. While we want materials to be transported quickly and efficiently, it’s also important to consider the environmental impact. loaded. “The average load factor that we have observed in the sector is around 50 percent, which is very inefficient,” points out Ferrero. A CCC will allow managers to combine different loads where possible and so use trucks more efficiently, while Ferrero says these centres can also lead to further benefits. “When a CCC is in an accessible location on the outskirts of a city, the price of land is lower and traffic disturbance is reduced,” he outlines. “It can basically stay open 24-7, so carriers don’t have just narrow windows of opportunity for making deliveries. You can use it to unload your goods and materials, and to combine them in an optimal way. We’ve put a lot of effort into analysing the conditions and understanding how consolidation centres could work.”

meet their deadlines, so even small delays to deliveries can have serious effects. “Delays in delivery could lead to a need to comprehensively review the work plan for the day, as it might depend on the correct equipment being available. If the equipment or personnel aren’t available, then this creates disruption and inefficiencies that in the end result in higher costs,” says Ferrero. A CCC has much more storage space than a typical construction site, so it can be used as a sort of back-up for some materials, where they are stored in a safe place. While delays in delivery to the construction site cannot be ruled out, they are likely to be less serious than if the materials were being transported from further afield. “We want to create a sort of

The pilot site in Verona.

just-in-time provision for a construction site, so there’s a greater degree of flexibility,” explains Ferrero. The location of a consolidation centre is another topic the project is addressing. “We’re looking at where a consolidation centre should be located with respect to the project(s) that it is intended to serve, and to the projections for the future, for example the important projects that may be coming up over the next few years,” continues Ferrero. “We need to find the right balance. While we want materials to be transported quickly and efficiently, it’s also important to consider the environmental impact.”

SUCCESS aimed to improve the urban freight transport caused by construction. It provided tools to better understand the impact of new policy measures (e.g. consolidation centres, size and class of admitted vehicles), discuss these measures cooperatively with different stakeholders (local administrations, contractors, transport companies), identify the measures that can work better in each specific case, and the cost and benefits associated to them.

SUCCESS is financed by the H2020 programme and is part of the CIVITAS initiative.

Environmental impact The CCC would ideally be close enough to the construction site so that the goods can be transported there reasonably quickly, but not so close that it causes too much pollution in the city. The cost of the land should not be too high as well, as that is often a very big part of the business case for a consolidation centre. “If the construction companies are contributing to the cost of a consolidation centre, then it needs to be in a convenient location for them,” says Cindy Guerlain, a researcher also closely involved in the project’s work. These issues all need to be taken into account in considering the impact of a consolidation centre, which is a central element of the project’s research. “We have simulated the impact of these consolidation centres in the pilot locations, in fact two in the case of Paris,” says Ferrero. This would give the key stakeholders, including construction companies, transport companies, suppliers and local authorities, a firmer basis on which to take decisions. A toolkit has been developed within the project, including a cost/benefit analysis tool to assess the impact of a CCC, and also a tool to identify the ideal location for a centre. “People can look at the map of a city, see where the suppliers are located and look at the relative importance of the suppliers,” explains Ferrero. The tools also enable stakeholders to calculate the impact of a CCC on several key performance indicators (KPIs), such as on levels of particulate matter in the atmosphere,

which Ferrero says is one of the key outputs from the project’s work. “This is very useful in terms of creating an environment where you can take these complex decisions, providing a basis to identify the major factors involved and consider conflicting interests,” he outlines. The project’s work is already having a practical impact, with several construction companies actively looking to implement some of the solutions that have been developed. Beyond the funding term of the project, Ferrero believes there remains significant scope for technical innovation in the construction sector, which could help to improve the sustainability of urban development. “We’re starting to see the use of 3-D printing and other innovative manufacturing technologies in some parts of the construction sector for example,” he says. With the construction sector under pressure to increase its productivity performance while reducing its environmental impact, this is set to remain an important area of research for Ferrero and his colleagues in future. “We will continue to look at new opportunities to apply some of these solutions to new construction projects, and to continue with our research,” he says.

The pilot site in Paris.

The project consortium includes 11 European partners from France, Italy, Luxembourg and Spain. They represent different and complementary types of institutions such as public administrations, construction companies, research centres and professional associations. By sharing missions and knowledge, they enable the SUCCESS project to fulfil its objectives. http://www.success-urbanlogistics.eu/partners-presentation/

Francesco FERRERO has been the Lead Partnership Officer for Mobility, Logistics and Smart Cities with the IT for Innovative Services Department of the Luxembourg Institute of Science and Technology since 2016. Previously, Francesco was the Head of the Smart City Strategic Program with the Istituto Superiore Mario Boella, Torino.

The pilot site in Valencia.

We spoke to Francesco Ferrero and Cindy Guerlain about the SUCCESS project’s work in investigating an alternative approach to managing the construction supply chain. 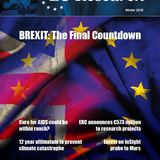