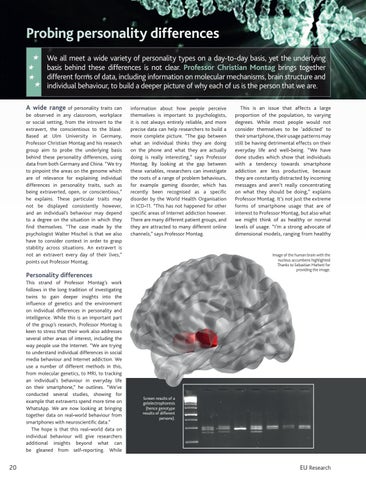 Probing personality differences We all meet a wide variety of personality types on a day-to-day basis, yet the underlying basis behind these differences is not clear. Professor Christian Montag brings together different forms of data, including information on molecular mechanisms, brain structure and individual behaviour, to build a deeper picture of why each of us is the person that we are. A wide range of personality traits can be observed in any classroom, workplace or social setting, from the introvert to the extravert, the conscientious to the blasé. Based at Ulm University in Germany, Professor Christian Montag and his research group aim to probe the underlying basis behind these personality differences, using data from both Germany and China. “We try to pinpoint the areas on the genome which are of relevance for explaining individual differences in personality traits, such as being extraverted, open, or conscientious,” he explains. These particular traits may not be displayed consistently however, and an individual’s behaviour may depend to a degree on the situation in which they find themselves. “The case made by the psychologist Walter Mischel is that we also have to consider context in order to grasp stability across situations. An extravert is not an extravert every day of their lives,” points out Professor Montag.

information about how people perceive themselves is important to psychologists, it is not always entirely reliable, and more precise data can help researchers to build a more complete picture. “The gap between what an individual thinks they are doing on the phone and what they are actually doing is really interesting,” says Professor Montag. By looking at the gap between these variables, researchers can investigate the roots of a range of problem behaviours, for example gaming disorder, which has recently been recognised as a specific disorder by the World Health Organisation in ICD-11. “This has not happened for other specific areas of Internet addiction however. There are many different patient groups, and they are attracted to many different online channels,” says Professor Montag.

Image of the human brain with the nucleus accumbens highlighted Thanks to Sebastian Markett for providing the image.

Personality differences This strand of Professor Montag’s work follows in the long tradition of investigating twins to gain deeper insights into the influence of genetics and the environment on individual differences in personality and intelligence. While this is an important part of the group’s research, Professor Montag is keen to stress that their work also addresses several other areas of interest, including the way people use the Internet. “We are trying to understand individual differences in social media behaviour and Internet addiction. We use a number of different methods in this, from molecular genetics, to MRI, to tracking an individual’s behaviour in everyday life on their smartphone,” he outlines. “We’ve conducted several studies, showing for example that extraverts spend more time on WhatsApp. We are now looking at bringing together data on real-world behaviour from smartphones with neuroscientific data.” The hope is that this real-world data on individual behaviour will give researchers additional insights beyond what can be gleaned from self-reporting. While

This is an issue that affects a large proportion of the population, to varying degrees. While most people would not consider themselves to be ‘addicted’ to their smartphone, their usage patterns may still be having detrimental effects on their everyday life and well-being. “We have done studies which show that individuals with a tendency towards smartphone addiction are less productive, because they are constantly distracted by incoming messages and aren’t really concentrating on what they should be doing,” explains Professor Montag. It’s not just the extreme forms of smartphone usage that are of interest to Professor Montag, but also what we might think of as healthy or normal levels of usage. “I’m a strong advocate of dimensional models, ranging from healthy

behaviour, over problematic behaviour, through to an individual who is addicted to his/her smartphone,” he says. An individual who is addicted to their smartphone or the Internet may also be more likely to experience depression, another topic that Professor Montag touches on in his research. Both genetic and environmental factors are involved here, says Professor Montag. “Together, this significantly heightens the risk of an individual becoming depressed. So it shows how strongly genetics and the environment interact to produce a certain psychological phenotype,” he says. The group are using a number of different methods to investigate individual differences, including digital phenotyping and analysis of smartphone usage data. “We have data indicating that a depressed state co-varies with certain smartphone variables,” he says. “We can hypothesise that when an individual is starting to get better they will start to contact their social network again, so their call behaviour will change, and they will have a more active lifestyle.” There may also be changes in the language a person uses in text messages as their mood improves, with text mining revealing a greater frequency of positive words as they recover. This data can be combined with other information to build a deeper understanding of an individual’s mood. “We aim to understand, on a longitudinal basis, how a person feels and behaves in everyday life,” explains Professor Montag. This is of course an important question for employers, who typically want to assess a prospective employee’s personality before deciding whether to hire them or not. “Employers usually want to see whether you are a conscientious person for example, as metaanalysis shows that it is a good predictor of job performance,” outlines Professor Montag. “On the other hand, high scores for neuroticism are associated with a higher probability of experiencing depression. So personality matters, in terms of predicting

certain variables, although this brings along ethical challenges in many ways.”

Core personality An individual’s core personality typically remains fairly stable over time, yet there may be some changes over the course of the average lifespan. For example, while an individual may have a tendency towards either introversion or extraversion throughout their lives, as they gain life experience and professional knowledge they usually become more assertive. “As you get older, you have more of a success story behind you and this might result in higher self-esteem,” explains Professor Montag. This is an area of deep interest to Professor Montag, and he plans to continue his research into the molecular roots of individual personality differences in future. “I will continue to dig deeper on the molecular level, which is clearly very basic, fundamental research,” he says. “On the other hand, I’m also very interested in practical issues, and trying to identify effective interventions for certain mental disorders.” A good example is encouraging people to wear a wrist watch or use an alarm clock in the bedroom instead of relying on their phone. While this may seem a relatively simple measure, Professor Montag says it can help prevent excessive smartphone use. “People who don’t wear a wrist watch usually get out their phones to get the time. Often they then notice they’ve received a message, fiddle around with their phone, then put it away 20 minutes later, still without finding out the time,” he outlines. By removing smartphones from the bedroom, people can boost both their sleep quality and quantity, while Professor Montag is also looking at other potential applications, including using data gathered in research to inform psychological counselling. “I’m pretty convinced that trait and state data from the Internet of Things can be meaningful as a guide to psychological counselling,” he says.

We try to pinpoint the areas on the genome which are of relevance for explaining individual differences in personality traits, such as being extraverted, open, or conscientious.

The aim of the Heisenberg Program is to enable outstanding scientists, who fulfill all the requirements for a long-term professorship, to prepare for a scientific leadership role and to work on further research topics during this time. In pursuing this goal, it is not always necessary to choose and implement project-based procedures. For this reason, in the submission of applications and later in the preparation of final reports, unlike other promotional instruments, no “summary” of project descriptions and project results is required. Thus, such information is not provided in GEPRI

The position of Christian Montag is funded by a Heisenberg grant awarded to him by the German Research Foundation (MO 2363/3-2).

• Please visit link below for full details of the Molecular Psychology team. https://www.uni-ulm.de/en/in/psy-mp/team/our-team/

Dr Christian Montag is Heisenberg Professor for Molecular Psychology at Ulm University, Ulm, Germany. He is interested in the molecular genetics of personality and emotions. He combines molecular genetics with brain imaging techniques such as structural /functional MRI to better understand individual differences in human nature including personality and Internet addiction. Adding to this he conducts research in the fields of Neuroeconomics and addiction including new approaches from Psychoinformatics.