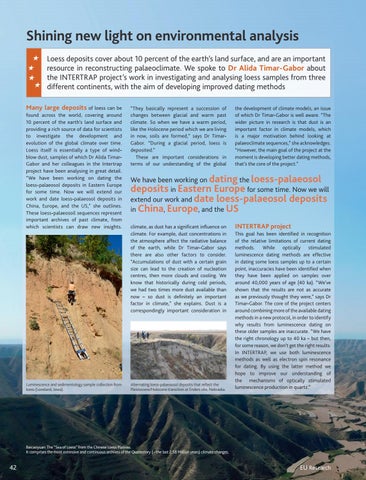 Shining new light on environmental analysis Loess deposits cover about 10 percent of the earth’s land surface, and are an important resource in reconstructing palaeoclimate. We spoke to Dr Alida Timar-Gabor about the INTERTRAP project’s work in investigating and analysing loess samples from three different continents, with the aim of developing improved dating methods Many large deposits of loess can be found across the world, covering around 10 percent of the earth’s land surface and providing a rich source of data for scientists to investigate the development and evolution of the global climate over time. Loess itself is essentially a type of windblow dust, samples of which Dr Alida TimarGabor and her colleagues in the Intertrap project have been analysing in great detail. “We have been working on dating the loess-palaeosol deposits in Eastern Europe for some time. Now we will extend our work and date loess-palaeosol deposits in China, Europe, and the US,” she outlines. These loess-palaeosoil sequences represent important archives of past climate, from which scientists can draw new insights.

“They basically represent a succession of changes between glacial and warm past climate. So when we have a warm period, like the Holocene period which we are living in now, soils are formed,” says Dr TimarGabor. “During a glacial period, loess is deposited.” These are important considerations in terms of our understanding of the global

the development of climate models, an issue of which Dr Timar-Gabor is well aware. “The wider picture in research is that dust is an important factor in climate models, which is a major motivation behind looking at palaeoclimate sequences,” she acknowledges. “However, the main goal of the project at the moment is developing better dating methods, that’s the core of the project.”

We have been working on dating the loess-palaeosol deposits in Eastern Europe for some time. Now we will extend our work and date loess-palaeosol deposits in China, Europe, and the US climate, as dust has a significant influence on climate. For example, dust concentrations in the atmosphere affect the radiative balance of the earth, while Dr Timar-Gabor says there are also other factors to consider. “Accumulations of dust with a certain grain size can lead to the creation of nucleation centres, then more clouds and cooling. We know that historically during cold periods, we had two times more dust available than now – so dust is definitely an important factor in climate,” she explains. Dust is a correspondingly important consideration in

INTERTRAP project This goal has been identified in recognition of the relative limitations of current dating methods. While optically stimulated luminescence dating methods are effective in dating some loess samples up to a certain point, inaccuracies have been identified when they have been applied on samples over around 40,000 years of age (40 ka). “We’ve shown that the results are not as accurate as we previously thought they were,” says Dr Timar-Gabor. The core of the project centers around combining more of the available dating methods in a new protocol, in order to identify why results from luminescence dating on these older samples are inaccurate. “We have the right chronology up to 40 ka – but then, for some reason, we don’t get the right results. In INTERTRAP, we use both luminescence methods as well as electron spin resonance for dating. By using the latter method we hope to improve our understanding of the mechanisms of optically stimulated luminescence production in quartz.”

Baicaoyuan: The “Sea of Loess” from the Chinese Loess Plateau. It comprises the most extensive and continuous archives of the Quaternary (~ the last 2.58 Million years) climate changes.

The main aim of the project is to develop better dating methods for these archives,” continues Dr Timar-Gabor. “These dating methods could then also be applied on other wind or water borne sediments, not only loess.” Researchers aim to integrate several different dating methods, in order to establish an improved dating protocol, bringing together optically stimulated luminescence, thermoluminescence and electron spin resonance. Dust samples have been gathered from several of the sites of interest in the project, now Dr Timar-Gabor and her colleagues will look to analyse them. “We have some proxies that we are looking at – so things like the grain size of the dust, and the magnetic susceptibility, which is a proxy that is usually employed when looking at these archives,” she outlines. Some differences have been observed in the samples that have been gathered so far. “The big climatic changes are generally synchronous around the world. But we also have some samples of many weak palaeosoils, which are characteristic to certain regions only,” says Dr Timar-Gabor. “There were periods where Eastern Europe was pretty dry for example, while Western Europe was more moist.”

Climate modelling The wider goal in this research is to develop correlation protocols that could be applied by climate scientists across the world, which holds important implications in terms of climate modelling. Loess deposits hold rich potential in terms of deepening our

understanding of the global climate, how it is formed and how it is likely to evolve, yet this potential can only be exploited more fully with highly rigorous dating methods based on absolute chronologies. “Loess is basically mineral dust, which is an important component in climate modelling, but this is not yet fully exploited,” stresses Dr Timar-Gabor. The project aims to make an important contribution in these terms. “We can basically recreate the past accumulation rates of dust, and so generate input data for climate models,” continues Dr TimarGabor. “In order to verify the way these climates models run, we need to feed them with past data and see if they give the right results. This can be achieved only if we have a rigorous chronology for these loesspalaeosol sequences.” These sequences represent the only archive that can be used to reconstruct palaeoclimate in some regions of the world, underlining their wider significance in understanding the history of the global climate. With an integrated approach to dating loess samples, researchers hope to also be able to probe regional differences in climate. “We already have some results that show that there is a lot of regional influence,” outlines Dr Timar-Gabor. A number of loess samples have been collected from different areas of the world, now Dr Timar-Gabor and her colleagues will look to carry out the analytical work. “We have had to set up a lot of equipment, in order to develop these integrated dating methods. Now we are starting with basic analysis of the available samples,” she says.

(i) test for the existence of a terrestrial lead or lag in Pleistocene/Holocene boundary as recorded by loess/paleosol deposits from 3 continents, by explicitly testing the assumption of synchronicity of climate changes recorded by these terrestrial archives. (ii)  will provide a significant improvement in our understanding of quartz luminescence production. We anticipate that INTERTRAP will extend the applicable range of quartz luminescence dating of loess and other sediments.

The most studied Romanian loess-palaeoosol archive is found at Mircea-Voda. Dobrogea is thought to comprise at least five glacial/interglacial cycles.

Dr Alida Timar-Gabor pioneered the application of trapped charge dating methods in Romania. She is Associate Professor of Environmental Radioactivity at Babeş-Bolyai University, Cluj-Napoca, where she established the Luminescence and Electron Spin Resonance Dating Laboratories.

Loess deposits cover about 10 percent of the earth’s land surface, and are an important resource in reconstructing palaeoclimate. We spoke t...

Loess deposits cover about 10 percent of the earth’s land surface, and are an important resource in reconstructing palaeoclimate. We spoke t...