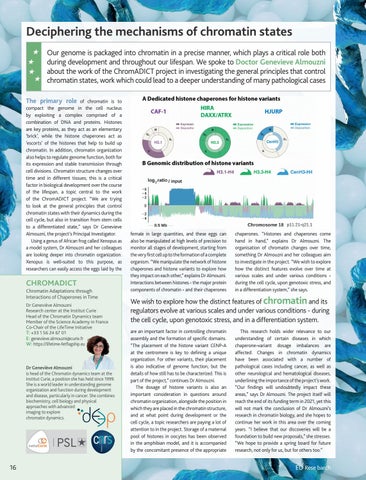 Deciphering the mechanisms of chromatin states Our genome is packaged into chromatin in a precise manner, which plays a critical role both during development and throughout our lifespan. We spoke to Doctor Genevieve Almouzni about the work of the ChromADICT project in investigating the general principles that control chromatin states, work which could lead to a deeper understanding of many pathological cases The primary role

of chromatin is to compact the genome in the cell nucleus by exploiting a complex comprised of a combination of DNA and proteins. Histones are key proteins, as they act as an elementary ‘brick’, while the histone chaperones act as ‘escorts’ of the histones that help to build up chromatin. In addition, chromatin organization also helps to regulate genome function, both for its expression and stable transmission through cell divisions. Chromatin structure changes over time and in different tissues; this is a critical factor in biological development over the course of the lifespan, a topic central to the work of the ChromADICT project. “We are trying to look at the general principles that control chromatin states with their dynamics during the cell cycle, but also in transition from stem cells to a differentiated state,” says Dr Genevieve Almouzni, the project’s Principal Investigator. Using a genus of African frog called Xenopus as a model system, Dr Almouzni and her colleagues are looking deeper into chromatin organization. Xenopus is well-suited to this purpose, as researchers can easily access the eggs laid by the

Dr Geneviève Almouzni is head of the Chromatin dynamics team at the Institut Curie, a position she has held since 1999. She is a world leader in understanding genome organization and function during development and disease, particularly in cancer. She combines biochemistry, cell biology and physical approaches with advanced imaging to explore chromatin dynamics.

female in large quantities, and these eggs can also be manipulated at high levels of precision to monitor all stages of development, starting from the very first cell up to the formation of a complete organism. “We manipulate the network of histone chaperones and histone variants to explore how they impact on each other,” explains Dr Almouzni. Interactions between histones - the major protein components of chromatin - and their chaperones

chaperones. “Histones and chaperones come hand in hand,” explains Dr Almouzni. The organisation of chromatin changes over time, something Dr Almouzni and her colleagues aim to investigate in the project. “We wish to explore how the distinct features evolve over time at various scales and under various conditions during the cell cycle, upon genotoxic stress, and in a differentiation system,” she says.

We wish to explore how the distinct features of chromatin and its regulators evolve at various scales and under various conditions - during the cell cycle, upon genotoxic stress, and in a differentiation system. are an important factor in controlling chromatin assembly and the formation of specific domains. “The placement of the histone variant CENP-A at the centromere is key to defining a unique organization. For other variants, their placement is also indicative of genome function, but the details of how still has to be characterized. This is part of the project,” continues Dr Almouzni. The dosage of histone variants is also an important consideration in questions around chromatin organization, alongside the position in which they are placed in the chromatin structure, and at what point during development or the cell cycle, a topic researchers are paying a lot of attention to in the project. Storage of a maternal pool of histones in oocytes has been observed in the amphibian model, and it is accompanied by the concomitant presence of the appropriate

This research holds wider relevance to our understanding of certain diseases in which chaperone-variant dosage imbalances are affected. Changes in chromatin dynamics have been associated with a number of pathological cases including cancer, as well as other neurological and hematological diseases, underlining the importance of the project’s work. “Our findings will undoubtedly impact these areas,” says Dr Almouzni. The project itself will reach the end of its funding term in 2021, yet this will not mark the conclusion of Dr Almouzni’s research in chromatin biology, and she hopes to continue her work in this area over the coming years. “I believe that our discoveries will be a foundation to build new proposals,” she stresses. “We hope to provide a spring board for future research, not only for us, but for others too.”

We spoke to Dr Genevieve Almouzni about the work of the ChromADICT project in investigating the general principles that control chromatin st...

We spoke to Dr Genevieve Almouzni about the work of the ChromADICT project in investigating the general principles that control chromatin st...