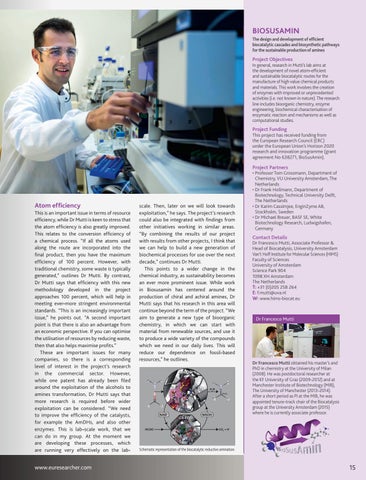 In general, research in Mutti’s lab aims at the development of novel atom‐efficient and sustainable biocatalytic routes for the manufacture of high value chemical products and materials. This work involves the creation of enzymes with improved or unprecedented activities (i.e. not known in nature). The research line includes bioorganic chemistry, enzyme engineering, biochemical characterisation of enzymatic reaction and mechanisms as well as computational studies.

This project has received funding from the European Research Council (ERC) under the European Union’s Horizon 2020 research and innovation programme (grant agreement No 638271, BioSusAmin).

Atom efficiency This is an important issue in terms of resource efficiency, while Dr Mutti is keen to stress that the atom efficiency is also greatly improved. This relates to the conversion efficiency of a chemical process. “If all the atoms used along the route are incorporated into the final product, then you have the maximum efficiency of 100 percent. However, with traditional chemistry, some waste is typically generated,” outlines Dr Mutti. By contrast, Dr Mutti says that efficiency with this new methodology developed in the project approaches 100 percent, which will help in meeting ever-more stringent environmental standards. “This is an increasingly important issue,” he points out. “A second important point is that there is also an advantage from an economic perspective. If you can optimise the utilisation of resources by reducing waste, then that also helps maximise profits.” These are important issues for many companies, so there is a corresponding level of interest in the project’s research in the commercial sector. However, while one patent has already been filed around the exploitation of the alcohols to amines transformation, Dr Mutti says that more research is required before wider exploitation can be considered. “We need to improve the efficiency of the catalysts, for example the AmDHs, and also other enzymes. This is lab-scale work, that we can do in my group. At the moment we are developing these processes, which are running very effectively on the lab-

scale. Then, later on we will look towards exploitation,” he says. The project’s research could also be integrated with findings from other initiatives working in similar areas. “By combining the results of our project with results from other projects, I think that we can help to build a new generation of biochemical processes for use over the next decade,” continues Dr Mutti. This points to a wider change in the chemical industry, as sustainability becomes an ever more prominent issue. While work in Biosusamin has centered around the production of chiral and achiral amines, Dr Mutti says that his research in this area will continue beyond the term of the project. “We aim to generate a new type of bioorganic chemistry, in which we can start with material from renewable sources, and use it to produce a wide variety of the compounds which we need in our daily lives. This will reduce our dependence on fossil-based resources,” he outlines.