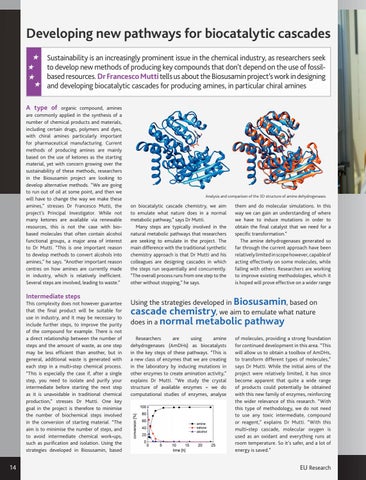 Developing new pathways for biocatalytic cascades Sustainability is an increasingly prominent issue in the chemical industry, as researchers seek to develop new methods of producing key compounds that don’t depend on the use of fossilbased resources. Dr Francesco Mutti tells us about the Biosusamin project’s work in designing and developing biocatalytic cascades for producing amines, in particular chiral amines A type of

organic compound, amines are commonly applied in the synthesis of a number of chemical products and materials, including certain drugs, polymers and dyes, with chiral amines particularly important for pharmaceutical manufacturing. Current methods of producing amines are mainly based on the use of ketones as the starting material, yet with concern growing over the sustainability of these methods, researchers in the Biosusamin project are looking to develop alternative methods. “We are going to run out of oil at some point, and then we will have to change the way we make these amines,” stresses Dr Francesco Mutti, the project’s Principal Investigator. While not many ketones are available via renewable resources, this is not the case with biobased molecules that often contain alcohol functional groups, a major area of interest to Dr Mutti. “This is one important reason to develop methods to convert alcohols into amines,” he says. “Another important reason centres on how amines are currently made in industry, which is relatively inefficient. Several steps are involved, leading to waste.”

Intermediate steps This complexity does not however guarantee that the final product will be suitable for use in industry, and it may be necessary to include further steps, to improve the purity of the compound for example. There is not a direct relationship between the number of steps and the amount of waste, as one step may be less efficient than another, but in general, additional waste is generated with each step in a multi-step chemical process. “This is especially the case if, after a single step, you need to isolate and purify your intermediate before starting the next step as it is unavoidable in traditional chemical production,” stresses Dr Mutti. One key goal in the project is therefore to minimise the number of biochemical steps involved in the conversion of starting material. “The aim is to minimise the number of steps, and to avoid intermediate chemical work-ups, such as purification and isolation. Using the strategies developed in Biosusamin, based

Analysis and comparison of the 3D structure of amine dehydrogenases.

on biocatalytic cascade chemistry, we aim to emulate what nature does in a normal metabolic pathway,” says Dr Mutti. Many steps are typically involved in the natural metabolic pathways that researchers are seeking to emulate in the project. The main difference with the traditional synthetic chemistry approach is that Dr Mutti and his colleagues are designing cascades in which the steps run sequentially and concurrently. “The overall process runs from one step to the other without stopping,” he says.

them and do molecular simulations. In this way we can gain an understanding of where we have to induce mutations in order to obtain the final catalyst that we need for a specific transformation.” The amine dehydrogenases generated so far through the current approach have been relatively limited in scope however, capable of acting effectively on some molecules, while failing with others. Researchers are working to improve existing methodologies, which it is hoped will prove effective on a wider range

Using the strategies developed in Biosusamin, based on cascade chemistry, we aim to emulate what nature does in a normal metabolic pathway Researchers are using amine dehydrogenases (AmDHs) as biocatalysts in the key steps of these pathways. “This is a new class of enzymes that we are creating in the laboratory by inducing mutations in other enzymes to create amination activity,” explains Dr Mutti. “We study the crystal structure of available enzymes – we do computational studies of enzymes, analyse

of molecules, providing a strong foundation for continued development in this area. “This will allow us to obtain a toolbox of AmDHs, to transform different types of molecules,” says Dr Mutti. While the initial aims of the project were relatively limited, it has since become apparent that quite a wide range of products could potentially be obtained with this new family of enzymes, reinforcing the wider relevance of this research. “With this type of methodology, we do not need to use any toxic intermediate, compound or reagent,” explains Dr Mutti. “With this multi-step cascade, molecular oxygen is used as an oxidant and everything runs at room temperature. So it’s safer, and a lot of energy is saved.”