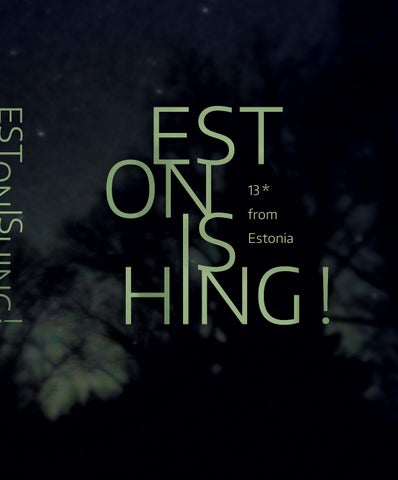 THE COLOUR OF DARKNESS

No more mountains, no more sea. No woods, no trees. No flowers, no fruits. No red lips, no green leaves, blue skies, shining gold. Far from tropics, long nights and short days, Moon reigns over Sun, snow hides the trees, wood and bones, metal and stones become the structure of peopleâ&#x20AC;&#x2122;s identities. Estonian jewellery has essence prevailing on surface, soul on flesh. The colour of darkness looms in the inner landscape, deep in the mind.

The first letters sent from a Brazilian gallerist named Thomas Cohn to Estonian jewellery artists arrived in the late summer of 2013. The From the Coolest Corner exhibition catalogue stoked intense interest in the visions and ideas of jewellery art prevalent at the far end of the world. Mildly worried – Should he prepare for snow, too? – we arranged a two-day artists’ studio visitation programme for the 3rd and 4th of November of that same year. The bridge had been built. Early November was chilly in Estonia. And his passion for the jewellery was genuine. It is a kindred spirit, friendship through creative works that has brought this selection of Estonian jewellery artists together into an exhibition and a book, which would not have been possible without the enthusiasm and support of Thomas Cohn. Viewed from a distance, what might be the common thread that runs through these artists? Is there some other kind of a language apart from Estonian that we all speak? We are all alumni of the Estonian Academy of Arts Department of Jewellery and Blacksmithing, and all (with one exception) former students of Kadri Mälk.

What stems from the school, what from blood, and what from soil – who knows for certain? Yet, Estonian jewellery understands the language of idealism – that’s a definite. Estonia is just the right kind of place: peripheral enough to be free of popular trend’s clear orientation, and close enough to keep an eye on the game. We perch here like a little bird on a branch. I’ve heard people speak of a certain spiritual endeavour; an urge to peer beyond physical reality. An opaque ancient quality, which nevertheless isn’t afraid to be breakawaybeautiful. An ability to strain out the noise and the excess, leaving a clear surface. The proximity of nature, the sensitivity of fingerprint, the masterfulness of ambiguity. It’s possible. Your own ears stay out of sight, and even so – you can’t escape them, either.

EHE [Â´ehe] Ornament, adornment; solid, pure, genuine. Estonian is probably the only language in the world where a single word - ehe - means both

The quality of being able to appreciate and respond to complex emotional or aesthetic influences. A theory of sensation, perception, and understanding; or a theory of creation and appreciation of beauty.

Maa is the planet Earth – soil, land, solid ground. It is a trustworthy surface that feeds, in the loins of which lies strength, and upon which one can lean. One gets a sense for range and distances by measuring ground. Only a yearning for far-away lands is unmeasurable.

Ilm is the measure of breadth. It signifies both the known and the unknown, the near and the far, the visible and the invisible. Both *maa - Earth, ground, distance, country, land **ilm - weather, state of atmosphere, world, earth + humankind, much, many, oftentimes ***maailm - universe, globe, world, surroundings, society, very large, spiritual space

worldliness and otherworldliness. Ilm is an expression of the unmeasurable and the transient, the changing and the fleeting. It is the opposite of Earth and everything earthly. Everything human should fit precisely between the two.

Just read me from front or behind, I’ll still rise from field and from forest, a web I will weave to your eyes deceive and my trickery’ll take all before us. Thick I may be when I settle, spurring hopes to clear hay from the nettle, but when I do rise up higher towards skies

’twill be to bring rain to the kettle.**

HALL* [hÂ´allj] It is a hue that ranges from white to black or is frozen dew on morning grass or a large auditorium in a stately building or substantia grisea i.e. grey matter.

Southern Estonian nĂźhr. Both a mind and a blade can be nĂźri. *blunt, bootless, dull, obtuse, torpid

Won’t ever stop, I am unclottable and flowing down – so hot and dark. Confessing time for every sin’s predictable. This winter’s snow I do now mark, its colour I can’t bear: this is too dark. Juhan Viiding

PARV * [pÂ´arv] A parv as a float. A parv as a group, a herd, a pack. Certain species of birds, insects, and fish live parvedes (in flocks). A parv is communality, the existence which does not function alone. Just as how singular thoughts form a whole in relation to one another, so do they gather into a parv, allowing themselves to go with the flow in the necessary direction.

UMBLUU * [umbl´u:] A statement that is unclear or dubious. *mumbo-jumbo

It’s Greek to me.

Estonia is a flat country. Even so, most uplands and settlements have carried the word mägi in their names since ancient times. Take for example Sillamägi, Pirogovi mägi, or Emumägi.

So ordinary and important. Many trees make a forest. There’s a nice saying: “You need to see the forest for the trees.” Meaning

you need to be able

Time is still. Hands, materials, and heartbeats. Music. Dissolving into

According to an Estonian proverb: you need to fertilize the cabbage that is growing. Where do children come from? Where do Urmas Lüüs SÜGISBALL / AUTUMN BALL brooch 2016 recycled enamelled pot, stainless steel 70 x 65 x 60 mm

works of art come from? Where else but from under healthy, vigorous cabbage leaves. Or from the sky? Or – from love? In 2008 I perceived it was time. So many talented jewellers in the emerging Estonian jewellery scene and such miserable conditions for their growth. I made a decision. It was time to do something. Founded a grant. As well as providing support during that particular

time, its aim was to provide a timeless aspect, which focused on the future. A large number of benevolent, generous friends and kindred spirits responded to the appeal, trusted me and the seed was sown – and not a small one. Tanel and his friends joined the cause. Then overseas supporters. And our own local Estonians support us as well. And this is a miracle. Where jewellery and relationships meet, there is hope. Kadri Mälk (Excerpt from the Non-explanatory Dictionary of Estonian Jewellery) 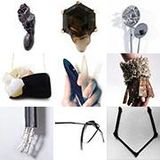