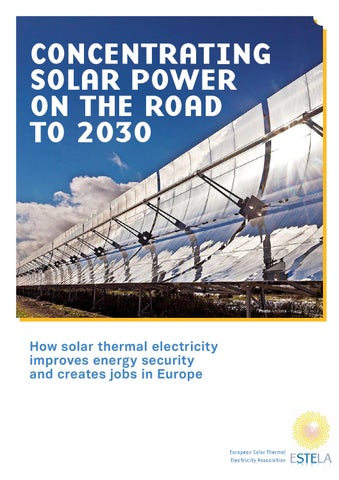 CONCENTRATING SOLAR POWER ON THE ROAD TO 2030

centrating Solar Power (CSP), is a technology that pro-

ciation, is the voice of the European STE/CSP industry.

From its office in Brussels, ESTELA provides a single

can be used to generate electricity with a steam turbine

or as process heat for industrial applications. By stor-

ing the thermal energy and/or using hybridization, STE is able to firmly deliver electricity on demand without additional cost â&#x20AC;&#x201C; even after sunset. STE is grid-friendly not only due to thermal energy storage, but also due to the use of conventional turbine technology to generate electricity.

Seizing the benefits of STE for Europe

The European industry is a global leader in STE, a tech-

Energy security. STE does not need imported fuels or

Grid and regulation. Seizing the advantages of STE for

nology with a unique set of advantages.

ship for STE and develop the STE industry in particular

in southern Europe, it is vital to create a domestic Eu-

ropean market of at least 250MW per year. Innovations

pecially between the Iberian Peninsula and the rest of

and cost reductions require projects in this “home mar-

Europe, also in Italy and Greece) and an improved reg-

Industry jobs. The STE industry has created manufacturing and engineering jobs throughout Europe, including the southern Member States hit hardest by the eco-

Southern Neighbourhood. STE is a key technology to

nomic crisis. The industry will continue doing so as the

meet rising demand for firm electricity supply in the EU’s

supported with long-term financing and other incentives

Southern Neighbourhood in a sustainable way. STE can

in order to bring innovative projects to the commercial

year, according to the IEA STE technology roadmap.

Neighbourhood development. EU support for a program to build several hundred megawatts of STE in its

Coordination. STE support should come from a well-co-

(CO2 -free) electricity on demand and makes a further in-

technology is relatively new compared to other energy

as well as in the EU itself. It would also be a significant

crease of variable renewables in the electricity system

technologies and has a strong potential for further in-

and cost-efficient contribution to the global combat

sion funds, as well as resources for development and

electricity will be the most competitive source of dis-

patchable electricity in the parts of the world with good Direct Natural Irradiation (DNI).

STE ENABLES A HIGHER SHARE OF RENEWABLES The EUâ&#x20AC;&#x2122;s 2020 renewable energy targets put Europe on track to increase the share of renewables in its electricity mix. This will continue with the 2030 target of at least 27%,

Due to its storage and its system-friendly thermal gen-

adopted by the European Council in October 2014. The

eration unit, STE is not only easy to integrate but can

final goal is an emission-free power sector in Europe by

also facilitate the integration of more intermittent re-

Since renewables are no longer a niche market and will

The European Council has set the goal of achieving 15%

contribute 45-60% to the electricity mix in Europe by

interconnection capacity and emphasized the need for

2030, the power sector faces new kinds of challenges. In

the full implementation of the internal electricity market.

This will make it possible for the whole European con-

to be a concern by European transmission system oper-

tinent to profit from sustainable and manageable STE

installed worldwide is part of the 280MW Solana plant

in Arizona with 6h storage. The 20MW Gemasolar

plant in Spain is able to provide electricity 24h a day

increase the cost of electricity generation.

with its 15h storage. There is no other commercially

The three 50MW Andasol plants as well as another

available solution to deliver such base load with re-

newables, except with hydro storage.

storage each since 2008. The largest storage system

STE CONTRIBUTES TO ENERGY SECURITY In its energy security strategy (May 2014), the EU acknowledges that significant investments in energy infrastructure and a diversification of energy sources are needed to reduce dependency on fossil fuels. The cost of strategic energy security is not reflected

Promoting STE technology is therefore in the common

interest of the EU Member States striving for energy se-

from the short-term balance of supply and demand and

are not sufficient to trigger investments in new renewa-

Dedicated, strategic investments in the form of reliable,

long-term contracts for STE are required to help make

STE is a sustainable technology that is able to substitute

fossil fuel imports and does not need back-up by other power plants in order to meet electricity demand when it occurs.

STE creates jobs in Europe Based on the latest IEA estimates, € 39-57bn will be

In addition to such direct activities, the European STE

invested on average every year between 2015 and

industry will in this case also create numerous indi-

ticular for the installation of 15GW STE in Europe be-

As reward for such a political support by EU, the Euro-

well positioned to capture a substantial share of this

jobs are at stake alone in Europe through these 15

years covering a wide spectrum of direct activities re-

the benefits of STE, support for the development of STE

is left to individual countries in the south.

since they have been hit hardest by the financial and

The EU-level 2030 targets and their governance mecha-

nism are an opportunity to address the specifics of STE

These advantages make STE a Technology of Common

as a Technology of Common Interest.

Interest for the EU. Yet, the fact that STE requires effec-

In addition, the umbrella of the energy union is an op-

tive cooperation at EU level is slowing down its develop-

portunity for intensified coordination between the EU

and Member States, as well as between the involved EU

lack the financial strength to support the development

of STE alone. Despite progress in creating the EU inter-

STE is inherently European: The entire EU will profit from STE’s ability to stabilize the grid and increase energy independence. STE from the south and wind power from the north are complementary. STE brings investments and jobs to the southern re-

STE IS AN OPPORTUNITY FOR ALL OF EUROPE

nal electricity market, which will allow the north to share

STE in the South complements wind in the North In Northern Europe, winds blow stronger during winter,

Therefore, STE in the south of the EU and wind power

while the sun shines more in summer.

in its north have a good seasonal fit.

Thanks to the Spanish STE program, the EU is a global leader in STE technology, profiting from a broad base of diverse companies and sectors.

Solar resources in MENA are among the world’s best. The IEA estimates that Africa and the Middle East would need 84 GW of STE by 2030.

Demand doubles every 10 years throughout the MENA

With the upcoming Paris climate conference, the EU also

needed to maintain this leadership. Such market de-

region. The result is a constant struggle to cover peak

velopment is in line with the IEA estimate that Europe

In addition, STE needs a remuneration mechanism that

demand, which often occurs after sunset. STE with

storage is a recognized, sustainable answer to address

countries is an opportunity to do so.

An EU-level approach to STE as a Technology of Com-

this challenge. As a secure electricity supply, STE also

A market for STE in the neighbouring MENA region would

provides a prerequisite for economic development and

be an opportunity for the European industry to create

tions for STE projects. This approach should combine

growth, which are essential for political stability in the

green jobs there and at home in Europe.

for renewable energy, as well as cohesion and research

Ultimately, increasing the standard of living and stability

in the EU’s Southern Neighbourhood is crucial for European cooperation policy and security.

EFFECTIVE SUPPORT FOR STE IN THE EU’S SOUTHERN NEIGHBOURHOOD First gas-STE hybrid plants exist in Egypt and Algeria, as well as Morocco. In Morocco, a 500 MW STE complex (Noor) is also currently under construction. Europe has supported these projects with development finance and technical cooperation. This experience provides a good basis for further cooperation with the EU’s Southern

Neighbourhood. With a coordinated effort, the EU can support

the creation of a self-sustaining STE market in its Southern Neighbourhood. A market of

STE is affordable As for all renewables, STE cost of electricity

several hundred MW new STE per year for a

period of 5-10 years is required to reach this ambitious but realistic objective.

depends on the quality of the resource, i.e. irradiation in the case of STE, and the cost

Beyond development finance, priority in-

struments to incentivize a STE market in the

of capital. The lines in the graph show cost

roadmap. Values for a 25-year PPA for a

150MW, 4h storage STE plant, under usual commercial terms for the loans without

To establish a stable STE market in MENA that

any public financial aids and no escalation.

cooperation needs to be coordinated with in-

By the end of 2014, prices for plants in Morocco went slightly below 12 c€/kWh due to

This coordination is particularly needed since

subsidies on the granted loans.

the European STE industry is facing an aggressive industrial policy by other countries supporting their STE industries in MENA.

#4 The EU will get the most out of STE via an intensified coordination of its energy, research, regional and development policies.

#5 A sizeable market for STE in the MENA countries benefits both the local and the EU economies.

#6 The EU must coordinate its development, climate and industrial policies regarding its Southern Neighbours. 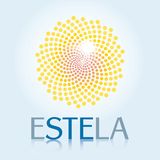 Concentrating Solar Power On The Road To 2030: How solar thermal electricity improves energy security and creates jobs in Europe

Concentrating Solar Power On The Road To 2030: How solar thermal electricity improves energy security and creates jobs in Europe