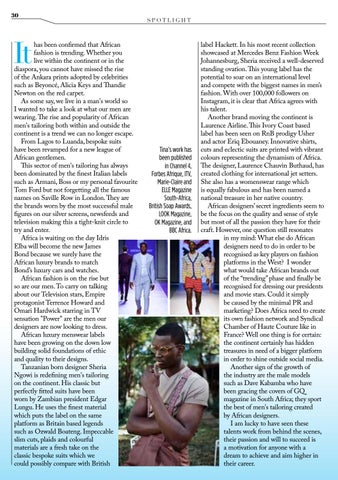 has been confirmed that African fashion is trending. Whether you live within the continent or in the diaspora, you cannot have missed the rise of the Ankara prints adopted by celebrities such as Beyoncé, Alicia Keys and Thandie Newton on the red carpet. As some say, we live in a man&#39;s world so I wanted to take a look at what our men are wearing. The rise and popularity of African men&#39;s tailoring both within and outside the continent is a trend we can no longer escape. From Lagos to Luanda, bespoke suits have been revamped for a new league of African gentlemen. This sector of men&#39;s tailoring has always been dominated by the finest Italian labels such as Armani, Boss or my personal favourite Tom Ford but not forgetting all the famous names on Saville Row in London. They are the brands worn by the most successful male figures on our silver screens, newsfeeds and television making this a tight-knit circle to try and enter. Africa is waiting on the day Idris Elba will become the new James Bond because we surely have the African luxury brands to match Bond’s luxury cars and watches. African fashion is on the rise but so are our men. To carry on talking about our Television stars, Empire protagonist Terrence Howard and Omari Hardwick starring in TV sensation &quot;Power&quot; are the men our designers are now looking to dress. African luxury menswear labels have been growing on the down low building solid foundations of ethic and quality to their designs. Tanzanian born designer Sheria Ngowi is redefining men&#39;s tailoring on the continent. His classic but perfectly fitted suits have been worn by Zambian president Edgar Lungu. He uses the finest material which puts the label on the same platform as Britain based legends such as Ozwald Boateng. Impeccable slim cuts, plaids and colourful materials are a fresh take on the classic bespoke suits which we could possibly compare with British

label Hackett. In his most recent collection showcased at Mercedes Benz Fashion Week Johannesburg, Sheria received a well-deserved standing ovation. This young label has the potential to soar on an international level and compete with the biggest names in men’s fashion. With over 100,000 followers on Instagram, it is clear that Africa agrees with his talent. Another brand moving the continent is Laurence Airline. This Ivory Coast based label has been seen on RnB prodigy Usher and actor Eriq Ebouaney. Innovative shirts, cuts and eclectic suits are printed with vibrant colours representing the dynamism of Africa. The designer, Laurence Chauvin Buthaud, has created clothing for international jet setters. She also has a womenswear range which is equally fabulous and has been named a national treasure in her native country. African designers’ secret ingredients seem to be the focus on the quality and sense of style but most of all the passion they have for their craft. However, one question still resonates in my mind: What else do African designers need to do in order to be recognised as key players on fashion platforms in the West? I wonder what would take African brands out of the “trending” phase and finally be recognised for dressing our presidents and movie stars. Could it simply be caused by the minimal PR and marketing? Does Africa need to create its own fashion network and Syndical Chamber of Haute Couture like in France? Well one thing is for certain: the continent certainly has hidden treasures in need of a bigger platform in order to shine outside social media. Another sign of the growth of the industry are the male models such as Dave Kabamba who have been gracing the covers of GQ magazine in South Africa; they sport the best of men&#39;s tailoring created by African designers. I am lucky to have seen these talents work from behind the scenes, their passion and will to succeed is a motivation for anyone with a dream to achieve and aim higher in their career.

Volume 2 features articles on luxury in Morocco, nestled high in the Atlas Mountains, Dragons Den star Deborah Medan, African Art and the Queen of Green plus a host of articles keeping you informed. 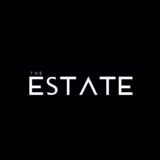 Meet the Head Tailor at Hackett

Heritage and British tailoring has a new face meet the head tailor at Hackett.

Eat yourself Sexy with the Queen of Green

Learn how food transformed my mind and my body in the Estate.