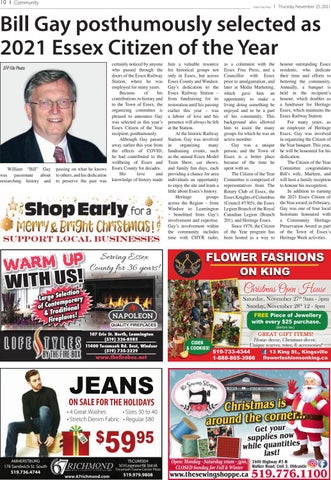 William “Bill” Gay was passionate about researching history and

passing on what he knows to others, and his dedication to preserve the past was

certainly noticed by anyone who passed through the doors of the Essex Railway Station, where he was employed for many years. Because of his contributions to history and to the Town of Essex, the organizing committee is pleased to announce Gay was selected as this year’s Essex Citizen of the Year recipient, posthumously. Although Gay passed away earlier this year from the effects of COVID, he had contributed to the wellbeing of Essex and Essex County for decades. His love and knowledge of history made

him a valuable resource for historical groups not only in Essex, but across Essex County and Windsor. Gay’s dedication to the Essex Railway Station – from fundraising for its restoration until his passing earlier this year – was a labour of love and his presence will always be felt at the Station. At the historic Railway Station, Gay was involved in organizing many fundraising events, such as the annual Essex Model Train Show, car shows, and family fun days, each providing a chance for area individuals an opportunity to enjoy the site and learn a little about Essex’s history. Heritage groups across the Region – from Windsor to Leamington – benefitted from Gay’s involvement and expertise. Gay’s involvement within the community includes time with CHYR radio,

as a columnist with the Essex Free Press, and a Councillor with Essex prior to amalgamation, and later at Media Marketing, which gave him an opportunity to make a living doing something he enjoyed and to be a part of his community. This background also allowed him to assist the many groups for which he was an active member. Gay was a unique person, and the Town of Essex is a better place because of the time he spent with us. The Citizen of the Year Committee is comprised of representatives from The Rotary Club of Essex, the Essex Knights of Columbus (Council #3305), the Essex Legion Branch of the Royal Canadian Legion (Branch 201), and Heritage Essex. Since 1978, the Citizen of the Year program has been hosted as a way to

honour outstanding Essex residents, who dedicate their time and efforts to bettering the community. Annually, a banquet is held in the recipient’s honour, which doubles as a fundraiser for Heritage Essex, which maintains the Essex Railway Station. For many years, as an employee of Heritage Essex, Gay was involved in organizing the Citizen of the Year banquet. This year, he will be honoured for his dedication. The Citizen of the Year Committee congratulates Bill’s wife, Marleen, and will host a family reception to honour his recognition. In addition to earning the 2021 Essex Citizen of the Year award, in February, Gay was one of four local historians honoured with a Community Heritage Preservation Award as part of the Town of Essex’s Heritage Week activities.