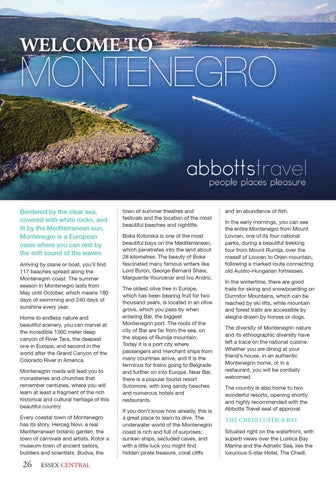 +KIDMIMDN->NHBMN?FMLINEML: ?K&MIMDN@GHBN@BGHMNIK?3E:NLJD FGHN->NHBMN1MDGHMIILJMLJNECJ: 1KJHMJMAIKNGENLN;CIK<MLJ KLEGEN@BMIMN>KCN?LJNIMEHN-> HBMNEK8HNEKCJDNK8NHBMN@L&ME9 Arriving by plane or boat, youâ&#x20AC;&#x2122;ll ďŹ nd 117 beaches spread along the Montenegrin coast. The summer season in Montenegro lasts from May until October, which means 180 days of swimming and 240 days of sunshine every year. Home to endless nature and beautiful scenery, you can marvel at the incredible 1300 meter deep canyon of River Tara, the deepest one in Europe, and second in the world after the Grand Canyon of the Colorado River in America. Montenegrin roads will lead you to monasteries and churches that remember centuries, where you will learn at least a fragment of the rich historical and cultural heritage of this beautiful country. Every coastal town of Montenegro has its story. Herceg Novi, a real Mediterranean botanic garden, the town of carnivals and artists. Kotor a museum-town of ancient sailors, builders and scientists. Budva, the

town of summer theatres and festivals and the location of the most beautiful beaches and nightlife. Boka Kotorska is one of the most beautiful bays on the Mediterranean, which penetrates into the land about 28 kilometres. The beauty of Boka fascinated many famous writers like Lord Byron, George Bernard Shaw, Marguerite Yourcenar and Ivo Andric. The oldest olive tree in Europe, which has been bearing fruit for two thousand years, is located in an olive grove, which you pass by when entering Bar, the biggest Montenegrin port. The roots of the city of Bar are far from the sea, on the slopes of Rumija mountain. Today it is a port city where passengers and merchant ships from many countries arrive, and it is the terminus for trains going to Belgrade and further on into Europe. Near Bar, there is a popular tourist resort Sutomore, with long sandy beaches and numerous hotels and restaurants. If you donâ&#x20AC;&#x2122;t know how already, this is a great place to learn to dive. The underwater world of the Montenegrin coast is rich and full of surprises: sunken ships, secluded caves, and with a little luck you might ďŹ nd hidden pirate treasure, coral cliffs

and an abundance of ďŹ sh. In the early mornings, you can see the entire Montenegro from Mount Lovcen, one of its four national parks, during a beautiful trekking tour from Mount Rumija, over the massif of Lovcen to Orjen mountain, following a marked route connecting old Austro-Hungarian fortresses. In the wintertime, there are good trails for skiing and snowboarding on Durmitor Mountains, which can be reached by ski lifts, while mountain and forest trails are accessible by sleighs drawn by horses or dogs. The diversity of Montenegrin nature and its ethnographic diversity have left a trace on the national cuisine. Whether you are dining at your friendâ&#x20AC;&#x2122;s house, in an authentic Montenegrin home, or in a restaurant, you will be cordially welcomed. The country is also home to two wonderful resorts, opening shortly and highly recommended with the Abbotts Travel seal of approval.

THE CHEDI LUSTICA BAY Situated right on the waterfront, with superb views over the Lustica Bay Marina and the Adriatic Sea, lies the luxurious 5-star Hotel, The Chedi.