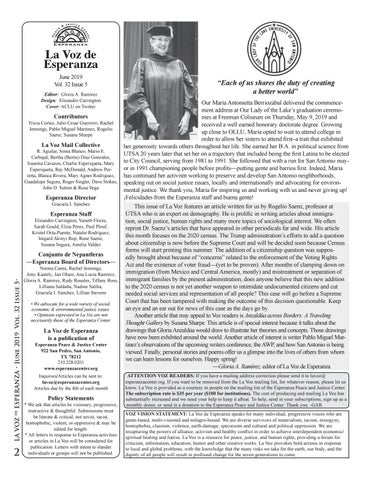 La Voz de Esperanza is a publication of

* We ask that articles be visionary, progressive, instructive &amp; thoughtful. Submissions must be literate &amp; critical; not sexist, racist, homophobic, violent, or oppressive &amp; may be edited for length. * All letters in response to Esperanza activities or articles in La Voz will be considered for publication. Letters with intent to slander individuals or groups will not be published.

“Each of us shares the duty of creating a better world” Our María Antonietta Berriozábal delivered the commencement address at Our Lady of the Lake’s graduation ceremonies at Freeman Coliseum on Thursday, May 9, 2019 and received a well earned honorary doctorate degree. Growing up close to OLLU, María opted to wait to attend college in order to allow her sisters to attend first–a trait that exhibited her generosity towards others throughout her life. She earned her B.A. in political science from UTSA 20 years later that set her on a trajectory that included being the first Latina to be elected to City Council, serving from 1981 to 1991. She followed that with a run for San Antonio mayor in 1991 championing people before profits—putting gente and barrios first. Indeed, María has continued her activism working to preserve and develop San Antonio neighborhoods, speaking out on social justice issues, locally and internationally and advocating for environmental justice. We thank you, María for inspiring us and working with us and never giving up! ¡Felicidades from the Esperanza staff and buena gente! This issue of La Voz features an article written for us by Rogelio Saenz, professor at UTSA who is an expert on demography. He is prolific in writing articles about immigration, social justice, human rights and many more topics of sociological interest. We often reprint Dr. Saenz’s articles that have appeared in other periodicals far and wide. His article this month focuses on the 2020 census. The Trump administration’s efforts to add a question about citizenship is now before the Supreme Court and will be decided soon because Census forms will start printing this summer. The addition of a citizenship question was supposedly brought about because of “concerns” related to the enforcement of the Voting Rights Act and the existence of voter fraud—(yet to be proven). After months of clamping down on immigration (from Mexico and Central America, mostly) and mistreatment or separation of immigrant families by the present administration, does anyone believe that this new addition to the 2020 census is not yet another weapon to intimidate undocumented citizens and cut needed social services and representation of all people? This case will go before a Supreme Court that has been tampered with making the outcome of this decision questionable. Keep an eye and an ear out for news of this case as the days go by. Another article that may appeal to Voz readers is Anzaldúa across Borders: A Traveling Thought Gallery by Susana Sharpe. This article is of special interest because it talks about the drawings that Gloria Anzaldúa would draw to illustrate her theories and concepts. Those drawings have now been exhibited around the world. Another article of interest is writer Pablo Miguel Martinez’s observations of the upcoming writers conference, the AWP, and how San Antonio is being viewed. Finally, personal stories and poems offer us a glimpse into the lives of others from whom we can learn lessons for ourselves. Happy spring! —Gloria A. Ramírez, editor of La Voz de Esperanza ATTENTION VOZ READERS: If you have a mailing address correction please send it to lavoz@ esperanzacenter.org. If you want to be removed from the La Voz mailing list, for whatever reason, please let us know. La Voz is provided as a courtesy to people on the mailing list of the Esperanza Peace and Justice Center. The subscription rate is $35 per year ($100 for institutions). The cost of producing and mailing La Voz has substantially increased and we need your help to keep it afloat. To help, send in your subscriptions, sign up as a monthly donor, or send in a donation to the Esperanza Peace and Justice Center. Thank you. -GAR VOZ VISION STATEMENT: La Voz de Esperanza speaks for many individual, progressive voices who are gente-based, multi-visioned and milagro-bound. We are diverse survivors of materialism, racism, misogyny, homophobia, classism, violence, earth-damage, speciesism and cultural and political oppression. We are recapturing the powers of alliance, activism and healthy conflict in order to achieve interdependent economic/ spiritual healing and fuerza. La Voz is a resource for peace, justice, and human rights, providing a forum for criticism, information, education, humor and other creative works. La Voz provokes bold actions in response to local and global problems, with the knowledge that the many risks we take for the earth, our body, and the dignity of all people will result in profound change for the seven generations to come.

politics of the 2020 census by Rogelio Sáenz • AWP: Next Year In San Anto by Pablo Miguel Martínez • Anzaldúa across Borders: A Traveling Thought Gallery by Susanna Sharpe • A Poem Found in Tennessee by Rachel Jennings • El Otro Cachete by Julio César Guerrero 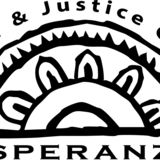