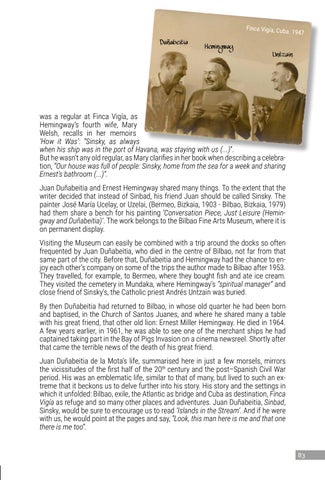 was a regular at Finca Vigía, as Hemingway’s fourth wife, Mary Welsh, recalls in her memoirs ‘How it Was’: “Sinsky, as always when his ship was in the port of Havana, was staying with us (...)”. But he wasn’t any old regular, as Mary clarifies in her book when describing a celebration, “Our house was full of people: Sinsky, home from the sea for a week and sharing Ernest’s bathroom (...)”. Juan Duñabeitia and Ernest Hemingway shared many things. To the extent that the writer decided that instead of Sinbad, his friend Juan should be called Sinsky. The painter José María Ucelay, or Uzelai, (Bermeo, Bizkaia, 1903 - Bilbao, Bizkaia, 1979) had them share a bench for his painting ‘Conversation Piece, Just Leisure (Hemingway and Duñabeitia)’. The work belongs to the Bilbao Fine Arts Museum, where it is on permanent display. Visiting the Museum can easily be combined with a trip around the docks so often frequented by Juan Duñabeitia, who died in the centre of Bilbao, not far from that same part of the city. Before that, Duñabeitia and Hemingway had the chance to enjoy each other’s company on some of the trips the author made to Bilbao after 1953. They travelled, for example, to Bermeo, where they bought fish and ate ice cream. They visited the cemetery in Mundaka, where Hemingway’s “spiritual manager” and close friend of Sinsky’s, the Catholic priest Andrés Untzain was buried. By then Duñabeitia had returned to Bilbao, in whose old quarter he had been born and baptised, in the Church of Santos Juanes, and where he shared many a table with his great friend, that other old lion: Ernest Miller Hemingway. He died in 1964. A few years earlier, in 1961, he was able to see one of the merchant ships he had captained taking part in the Bay of Pigs Invasion on a cinema newsreel. Shortly after that came the terrible news of the death of his great friend. Juan Duñabeitia de la Mota’s life, summarised here in just a few morsels, mirrors the vicissitudes of the first half of the 20th century and the post–Spanish Civil War period. His was an emblematic life, similar to that of many, but lived to such an extreme that it beckons us to delve further into his story. His story and the settings in which it unfolded: Bilbao, exile, the Atlantic as bridge and Cuba as destination, Finca Vigía as refuge and so many other places and adventures. Juan Duñabeitia, Sinbad, Sinsky, would be sure to encourage us to read ‘Islands in the Stream’. And if he were with us, he would point at the pages and say, “Look, this man here is me and that one there is me too”.