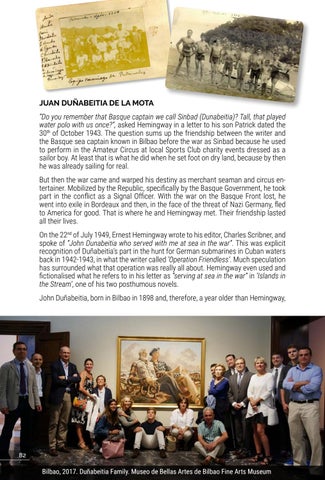 JUAN DUÑABEITIA DE LA MOTA “Do you remember that Basque captain we call Sinbad (Dunabeitia)? Tall, that played water polo with us once?”, asked Hemingway in a letter to his son Patrick dated the 30th of October 1943. The question sums up the friendship between the writer and the Basque sea captain known in Bilbao before the war as Sinbad because he used to perform in the Amateur Circus at local Sports Club charity events dressed as a sailor boy. At least that is what he did when he set foot on dry land, because by then he was already sailing for real. But then the war came and warped his destiny as merchant seaman and circus entertainer. Mobilized by the Republic, specifically by the Basque Government, he took part in the conflict as a Signal Officer. With the war on the Basque Front lost, he went into exile in Bordeaux and then, in the face of the threat of Nazi Germany, fled to America for good. That is where he and Hemingway met. Their friendship lasted all their lives. On the 22nd of July 1949, Ernest Hemingway wrote to his editor, Charles Scribner, and spoke of “John Dunabeitia who served with me at sea in the war”. This was explicit recognition of Duñabeitia’s part in the hunt for German submarines in Cuban waters back in 1942-1943, in what the writer called ‘Operation Friendless’. Much speculation has surrounded what that operation was really all about. Hemingway even used and fictionalised what he refers to in his letter as “serving at sea in the war” in ‘Islands in the Stream’, one of his two posthumous novels. John Duñabeitia, born in Bilbao in 1898 and, therefore, a year older than Hemingway,