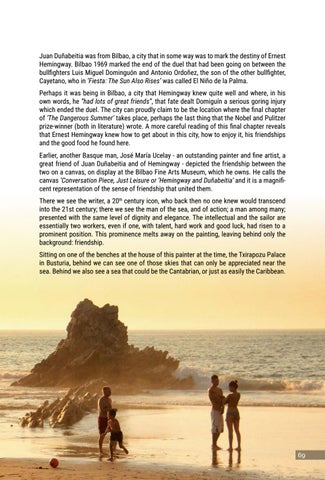 Juan Duñabeitia was from Bilbao, a city that in some way was to mark the destiny of Ernest Hemingway. Bilbao 1969 marked the end of the duel that had been going on between the bullfighters Luis Miguel Dominguón and Antonio Ordoñez, the son of the other bullfighter, Cayetano, who in ‘Fiesta: The Sun Also Rises’ was called El Niño de la Palma. Perhaps it was being in Bilbao, a city that Hemingway knew quite well and where, in his own words, he “had lots of great friends”, that fate dealt Domiguín a serious goring injury which ended the duel. The city can proudly claim to be the location where the final chapter of ‘The Dangerous Summer’ takes place, perhaps the last thing that the Nobel and Pulitzer prize-winner (both in literature) wrote. A more careful reading of this final chapter reveals that Ernest Hemingway knew how to get about in this city, how to enjoy it, his friendships and the good food he found here. Earlier, another Basque man, José María Ucelay - an outstanding painter and fine artist, a great friend of Juan Duñabeitia and of Hemingway - depicted the friendship between the two on a canvas, on display at the Bilbao Fine Arts Museum, which he owns. He calls the canvas ‘Conversation Piece, Just Leisure or ‘Hemingway and Duñabeitia’ and it is a magnificent representation of the sense of friendship that united them. There we see the writer, a 20th century icon, who back then no one knew would transcend into the 21st century; there we see the man of the sea, and of action; a man among many; presented with the same level of dignity and elegance. The intellectual and the sailor are essentially two workers, even if one, with talent, hard work and good luck, had risen to a prominent position. This prominence melts away on the painting, leaving behind only the background: friendship. Sitting on one of the benches at the house of this painter at the time, the Txirapozu Palace in Busturia, behind we can see one of those skies that can only be appreciated near the sea. Behind we also see a sea that could be the Cantabrian, or just as easily the Caribbean.