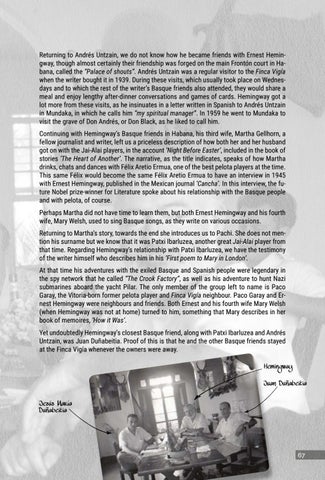 Returning to Andrés Untzain, we do not know how he became friends with Ernest Hemingway, though almost certainly their friendship was forged on the main Frontón court in Habana, called the “Palace of shouts”. Andrés Untzain was a regular visitor to the Finca Vigía when the writer bought it in 1939. During these visits, which usually took place on Wednesdays and to which the rest of the writer’s Basque friends also attended, they would share a meal and enjoy lengthy after-dinner conversations and games of cards. Hemingway got a lot more from these visits, as he insinuates in a letter written in Spanish to Andrés Untzain in Mundaka, in which he calls him “my spiritual manager”. In 1959 he went to Mundaka to visit the grave of Don Andrés, or Don Black, as he liked to call him. Continuing with Hemingway’s Basque friends in Habana, his third wife, Martha Gellhorn, a fellow journalist and writer, left us a priceless description of how both her and her husband got on with the Jai-Alai players, in the account ‘Night Before Easter’, included in the book of stories ‘The Heart of Another’. The narrative, as the title indicates, speaks of how Martha drinks, chats and dances with Félix Aretio Ermua, one of the best pelota players at the time. This same Félix would become the same Félix Aretio Ermua to have an interview in 1945 with Ernest Hemingway, published in the Mexican journal ‘Cancha’. In this interview, the future Nobel prize-winner for Literature spoke about his relationship with the Basque people and with pelota, of course. Perhaps Martha did not have time to learn them, but both Ernest Hemingway and his fourth wife, Mary Welsh, used to sing Basque songs, as they write on various occasions. Returning to Martha’s story, towards the end she introduces us to Pachi. She does not mention his surname but we know that it was Patxi Ibarluzea, another great Jai-Alai player from that time. Regarding Hemingway’s relationship with Patxi Ibarluzea, we have the testimony of the writer himself who describes him in his ‘First poem to Mary in London’. At that time his adventures with the exiled Basque and Spanish people were legendary in the spy network that he called “The Crook Factory”, as well as his adventure to hunt Nazi submarines aboard the yacht Pilar. The only member of the group left to name is Paco Garay, the Vitoria-born former pelota player and Finca Vigía neighbour. Paco Garay and Ernest Hemingway were neighbours and friends. Both Ernest and his fourth wife Mary Welsh (when Hemingway was not at home) turned to him, something that Mary describes in her book of memoires, ‘How it Was’. Yet undoubtedly Hemingway’s closest Basque friend, along with Patxi Ibarluzea and Andrés Untzain, was Juan Duñabeitia. Proof of this is that he and the other Basque friends stayed at the Finca Vigía whenever the owners were away. Hemingway Juan Duñabeitia Jesús María Duñabeitia