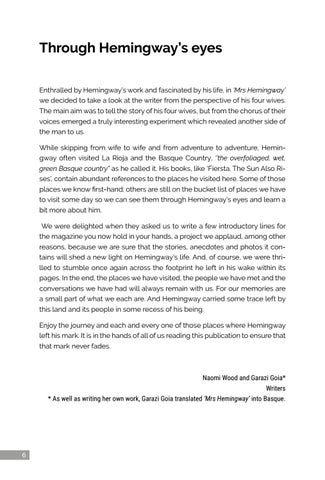 Through Hemingway’s eyes Enthralled by Hemingway’s work and fascinated by his life, in ‘Mrs Hemingway’ we decided to take a look at the writer from the perspective of his four wives. The main aim was to tell the story of his four wives, but from the chorus of their voices emerged a truly interesting experiment which revealed another side of the man to us. While skipping from wife to wife and from adventure to adventure, Hemingway often visited La Rioja and the Basque Country, ‘’the overfoliaged, wet, green Basque country” as he called it. His books, like ‘Fiersta. The Sun Also Rises’, contain abundant references to the places he visited here. Some of those places we know first-hand; others are still on the bucket list of places we have to visit some day so we can see them through Hemingway’s eyes and learn a bit more about him. We were delighted when they asked us to write a few introductory lines for the magazine you now hold in your hands, a project we applaud, among other reasons, because we are sure that the stories, anecdotes and photos it contains will shed a new light on Hemingway’s life. And, of course, we were thrilled to stumble once again across the footprint he left in his wake within its pages. In the end, the places we have visited, the people we have met and the conversations we have had will always remain with us. For our memories are a small part of what we each are. And Hemingway carried some trace left by this land and its people in some recess of his being. Enjoy the journey and each and every one of those places where Hemingway left his mark. It is in the hands of all of us reading this publication to ensure that that mark never fades.

Naomi Wood and Garazi Goia* Writers * As well as writing her own work, Garazi Goia translated ‘Mrs Hemingway’ into Basque.