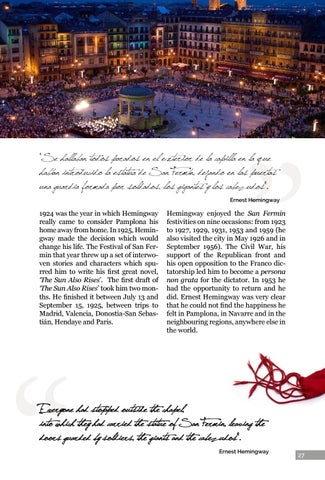 1924 was the year in which Hemingway really came to consider Pamplona his home away from home. In 1925, Hemingway made the decision which would change his life. The Festival of San Fermin that year threw up a set of interwoven stories and characters which spurred him to write his first great novel, ‘The Sun Also Rises’. The first draft of ‘The Sun Also Rises’ took him two months. He finished it between July 13 and September 15, 1925, between trips to Madrid, Valencia, Donostia-San Sebastián, Hendaye and Paris.

Hemingway enjoyed the San Fermin festivities on nine occasions: from 1923 to 1927, 1929, 1931, 1953 and 1959 (he also visited the city in May 1926 and in September 1956). The Civil War, his support of the Republican front and his open opposition to the Franco dictatorship led him to become a persona non grata for the dictator. In 1953 he had the opportunity to return and he did. Ernest Hemingway was very clear that he could not find the happiness he felt in Pamplona, in Navarre and in the neighbouring regions, anywhere else in the world.

Everyone had stopped outside the chapel, into which they had carried the statue of San Fermin, leaving the doors guarded by soldiers, the giants and the cabezudos”. Ernest Hemingway