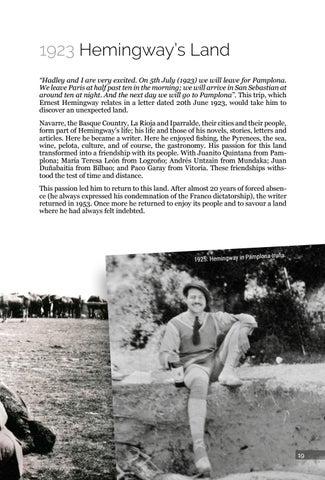 1923 Hemingway’s Land “Hadley and I are very excited. On 5th July (1923) we will leave for Pamplona. We leave Paris at half past ten in the morning; we will arrive in San Sebastian at around ten at night. And the next day we will go to Pamplona”. This trip, which Ernest Hemingway relates in a letter dated 20th June 1923, would take him to discover an unexpected land. Navarre, the Basque Country, La Rioja and Iparralde, their cities and their people, form part of Hemingway’s life; his life and those of his novels, stories, letters and articles. Here he became a writer. Here he enjoyed fishing, the Pyrenees, the sea, wine, pelota, culture, and of course, the gastronomy. His passion for this land transformed into a friendship with its people. With Juanito Quintana from Pamplona; María Teresa León from Logroño; Andrés Untzain from Mundaka; Juan Duñabaitia from Bilbao; and Paco Garay from Vitoria. These friendships withstood the test of time and distance. This passion led him to return to this land. After almost 20 years of forced absence (he always expressed his condemnation of the Franco dictatorship), the writer returned in 1953. Once more he returned to enjoy its people and to savour a land where he had always felt indebted.