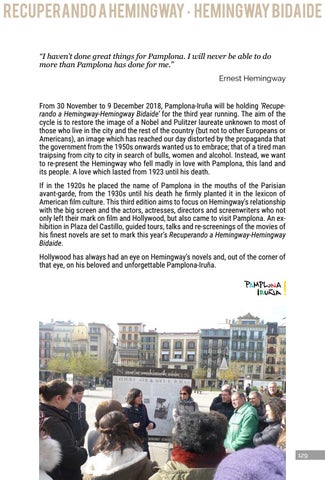 “I haven’t done great things for Pamplona. I will never be able to do more than Pamplona has done for me.” Ernest Hemingway From 30 November to 9 December 2018, Pamplona-Iruña will be holding ‘Recuperando a Hemingway-Hemingway Bidaide’ for the third year running. The aim of the cycle is to restore the image of a Nobel and Pulitzer laureate unknown to most of those who live in the city and the rest of the country (but not to other Europeans or Americans), an image which has reached our day distorted by the propaganda that the government from the 1950s onwards wanted us to embrace; that of a tired man traipsing from city to city in search of bulls, women and alcohol. Instead, we want to re-present the Hemingway who fell madly in love with Pamplona, this land and its people. A love which lasted from 1923 until his death. If in the 1920s he placed the name of Pamplona in the mouths of the Parisian avant-garde, from the 1930s until his death he firmly planted it in the lexicon of American film culture. This third edition aims to focus on Hemingway’s relationship with the big screen and the actors, actresses, directors and screenwriters who not only left their mark on film and Hollywood, but also came to visit Pamplona. An exhibition in Plaza del Castillo, guided tours, talks and re-screenings of the movies of his finest novels are set to mark this year’s Recuperando a Hemingway-Hemingway Bidaide. Hollywood has always had an eye on Hemingway’s novels and, out of the corner of that eye, on his beloved and unforgettable Pamplona-Iruña.