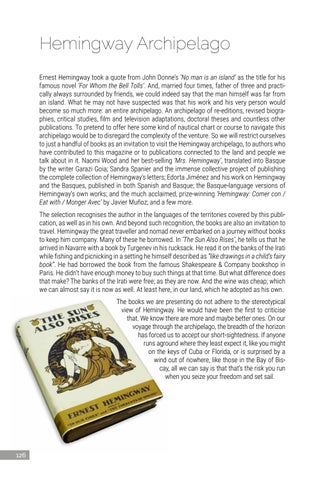 Hemingway Archipelago Ernest Hemingway took a quote from John Donne’s ‘No man is an island’ as the title for his famous novel ‘For Whom the Bell Tolls’. And, married four times, father of three and practically always surrounded by friends, we could indeed say that the man himself was far from an island. What he may not have suspected was that his work and his very person would become so much more: an entire archipelago. An archipelago of re-editions, revised biographies, critical studies, film and television adaptations, doctoral theses and countless other publications. To pretend to offer here some kind of nautical chart or course to navigate this archipelago would be to disregard the complexity of the venture. So we will restrict ourselves to just a handful of books as an invitation to visit the Hemingway archipelago, to authors who have contributed to this magazine or to publications connected to the land and people we talk about in it. Naomi Wood and her best-selling ‘Mrs. Hemingway’, translated into Basque by the writer Garazi Goia; Sandra Spanier and the immense collective project of publishing the complete collection of Hemingway’s letters; Edorta Jiménez and his work on Hemingway and the Basques, published in both Spanish and Basque; the Basque-language versions of Hemingway’s own works; and the much acclaimed, prize-winning ‘Hemingway: Comer con / Eat with / Monger Avec’ by Javier Muñoz; and a few more. The selection recognises the author in the languages of the territories covered by this publication, as well as in his own. And beyond such recognition, the books are also an invitation to travel. Hemingway the great traveller and nomad never embarked on a journey without books to keep him company. Many of these he borrowed. In ‘The Sun Also Rises’, he tells us that he arrived in Navarre with a book by Turgenev in his rucksack. He read it on the banks of the Irati while fishing and picnicking in a setting he himself described as “like drawings in a child’s fairy book”. He had borrowed the book from the famous Shakespeare & Company bookshop in Paris. He didn’t have enough money to buy such things at that time. But what difference does that make? The banks of the Irati were free; as they are now. And the wine was cheap; which we can almost say it is now as well. At least here, in our land, which he adopted as his own. The books we are presenting do not adhere to the stereotypical view of Hemingway. He would have been the first to criticise that. We know there are more and maybe better ones. On our voyage through the archipelago, the breadth of the horizon has forced us to accept our short-sightedness. If anyone runs aground where they least expect it, like you might on the keys of Cuba or Florida, or is surprised by a wind out of nowhere, like those in the Bay of Biscay, all we can say is that that’s the risk you run when you seize your freedom and set sail.