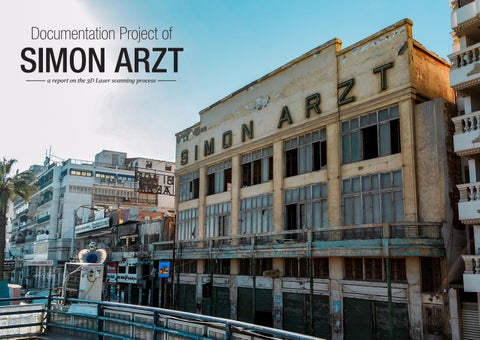 SIMON ARZT a report on the 3D Laser scanning process

Introduction to the documentation process

Workflow of the laser scanning

Historical Brief Everyone who has ever visited, or lived in Port Said, is familiar with the Simon Arzt store on the waterfont. The store was, in its day, one of the worldâ&#x20AC;&#x2122;s great department stores. Here the traveller could stock up on all his (or her) needs on the way to Africa, India and the Far East. The shop assistants, clad in white suits and red tabooshes, were on hand as soon as a ship docked, ready to sell the tourist everything he or she needed: solar topees, cosmetics, tropical clothing. There was also a hairdresserâ&#x20AC;&#x2122;s, photograph studio, pharmacy and florist. It even had its own post office. The store never closed its doors, as long as a liner lay at anchor in the harbour at Port Said.

The current Simon Arzt building on the waterfront opened in 1924. It was planned as a rectangular hall, with interior balconies in two floors. The ceiling was made of glass and provided natural light. Its street faĂ§ade measures about 40 metres with a total area of 1984m2. This building is a typical example of the European styles that were common in the larger cities along the Mediterranean at this time and is one of the most impressive structures in Port Said, demonstrating its international contacts and architects who contributed to the unique blend of architectural styles in the city. It had a sister building in Naples.

Introduction to the documentation process The main objective of the documentation process is to conduct an architectural and condition assessment of SimonArzt Building. To ensure the precision of the restoration and development process, a very accurate and detailed information must be acquired throughout the documentation. Initially, a basic survey has been done using traditional surveying tools (e.g. total station and distance meters). The outcome wasn’t satisfactory or accurate enough. Also, it didn’t provide enough imagery or detailing but it has set the base line for the next step. We investigated the more advanced techniques that can produce the desired outcome. Two main options proved their reliability: Photogrammetry and LiDAR (i.e. Laser Scanning). •PHOTOGRAMMETRY: A technique based on extracting 3D information from photographs. The process involves taking overlapping photographs of an object, structure, or space, and converting them into 2D or 3D digital models. • LiDAR: a surveying method that measures distance to a target by illuminating the target with laser light and measuring the reflected light with a sensor. Differences in laser return times and wavelengths can then be used to make 08

digital 3D representations of the target. The beforementioned techniques has been evaluated with their pros and cons in mind until a final decision was taken: Photogrammetry requires an extraordinary amount of work to cover every detail in the building. Some parts also required a flying drone to capture the unreachable areas which was legally unacceptable. While Photogrammetry offered a great imaging quality, it wasn’t a reliable option for the documentation process. On the other hand, laser scanning appeared to be a more suitable option for its accuracy, productivity and fair imaging quality. We collaborated with PortSaid Universit’s faculty of engineering to provide us with required equipment and experts to carry on the Laser Scanning process. The faculty provided a Leica ScanStation P40 and the team responsible for the process. The process led by Dr. Ahmed ElSharkawy lasted for a week including planning phase and actual scanning process.

LEICA SCANSTATION P40 There are different types of scanners but they all work with the same basic principle. A laser scanner emits a rapidly pulsing or continuous laser beam. As it emits the beam, the scanner automatically rotates around its vertical axis and a rapidly spinning or oscillating mirror also moves the beam up and down.

If some views may be obstructed or if a site is large enough that the scanner can’t reach all of it with one scan, the scanner is moved to different vantage points for more scans. The best vantage points will be based on Logistics and scanner capabilities. Multiple scans can be automatically aligned with each other.

The result is a systematic sweeping of the beam over the area. When the beam hits an object some of its energy bounces back to the scanner. If the returned energy signal is strong enough, a sensor detects it and a timer is used to calculate the distance from the scanner to the object.

In fact, users have several convenient options for post-processing that use handy scan targets or markers placed around the site. Other methods don’t need any targets. Regardless of which method is used it’s important that it be done accurately. To process point clouds into deliverables a dedicated stand-alone software or plugin software can be used to work efficiently with point cloud data.

For each distance measurement, additional critical data is recorded including the corresponding horizontal angle of the rotating laser and the corresponding vertical angle of the moving mirror. The scanner automatically combines these to calculate a 3D (X, Y and Z) coordinate position for each point. The resulting scan is a set of 3d coordinate measurements often called a “point cloud”. Textures can be added to the point cloud using either a camera that’s built into the scanner or using an external camera and automatically merging the photos with scan data. Also, scans can be easily geo-referenced to local coordinate systems like conventional surveys.

Meetings with Dr. Ahmed ElSharkawy and SimonArzt team were held to review and plan the whole process. The team agreed on the allowed error value and the required output. A typical plan was used to set scan station locations in order to cover the whole volume of the building in the most effecient way. Also, the plan was used to determine the position of the fixed target points that will be used in align every scan with the other. Field work began with installing the target points in the predetermined locations and preparing the site for the laser scanning process. Preparations included the removal of any reflective surfaces or covering it with matte material, spreading piles of construction materials over the ground and providing the required electrical wiring.

The process started with four stations scanning the main façade. Each was located in a different location and were directed towards the main façade. The one located in the middle and perpendicular to the façade was a special case as it was set to have a high-resolution cloud point. This particular station lasted for three consecutive hours compared to other station that lasted for fifteen minutes. Pre-installed targets were used to stitch and align exterior scans with interior ones.

This stage began with reviewing all the scan files and spotting the unexpected problems such as high exposure imagery, overlapping, etc. Several meetings were held with the surveying team to handle all the registered model while working in parallel on a BIM model with Revit software.

Site selection, choosing locations inside the site and scanning sequence is according to the complexity of the location and the movement of the sun. Light condition is important to have color harmony, but it is not avoidable to have some problems with textures by the changes of light and shadows on the scanned area.

Using cloud points after registration and aligning all the scan files as a snapping guide points to build an accurate model. Building base model elements (walls, columns, beams, etc.) without going into details to spot the main difference between the Laser scanning documentation and typical documentation. Generating a parametric Revit families for BIM model for all the unique building details such as “Railing, Atrium skylight, atrium beams, etc.” we began to organize a sheet list documenting all the required data “Main architecture drawings, surrounding spaces’ areas, building details and registered point cloud model.

A public call has been set out to the community of architects, archeologists and anyone interested in heritage preservation for the opportunity to attend a workshop on the documentation process. The number of applicants were divided into three groups which attended on three separate days. The workshop included an introduction to the history of SimonArzt, the challenges that faced the development team and a live demonstration of the scanning process.

Output In the context of restoration process, drawing up a master plan is the first step towards a positive outcome. This document becomes essential in certain cases such as the complexity of the monument, its extension, the length of restoration, etc. It requires a framework document assuring background knowledge and setting a strategy which provides order and uniformity to each and all possible interventions. Documentation conclusions were made after inspecting the output data and building a BIM model. The total ground floor area is approximately 1,880 m2. The building was constructed with its main axis slanted at a 33o to the north direction. It was well planned for its original use as a department store. A vast sky-lit atrium measuring (15 mx25 m) provides the interior space with enough natural lighting and a unique atmosphere. The ground floor consisted of small showcases that was used presumably to sell textiles. In the middle of the atrium existed the cashier counter with packaging and delivering services. Mezzanine floor was used as a service path to overlook the life inside the atrium. Manager and accountant offices were located on the mezzanine level exactly above the entrance. The first floor of the southern part of SimonArzt was constructed after a while as an expansion to the original construction. Local stories tell us that higher floors were used for smaller goods and services. Also, stories of elders tell that people used to have sun baths on the roof.

With a total number of 57 scans throughout and around the building, We managed to get an accurate full 3d model of SimonArzt and its relationship with surroundings. Approximately 1000m2 of open free areas are discovered and were put into consideration during development process. 18

The “Restoration of SimonArzt” project gave us the Ow ne r opportunity to explore the idea of heritage preservation and pushing further to the extent of having an identical digital copy of heritage that’s ready to be well studied and preserved. So rothe jectmembers Name who participated within we would like to give a deep thanks toPall this project and especially for the general coordinators, Portsaid University and 3Dproject Plansa succesful case study that everyone who had the passion to make this may inspire further heritage redevelopment projects in PortSaid. Project number 0001 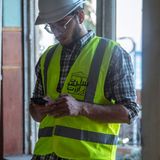