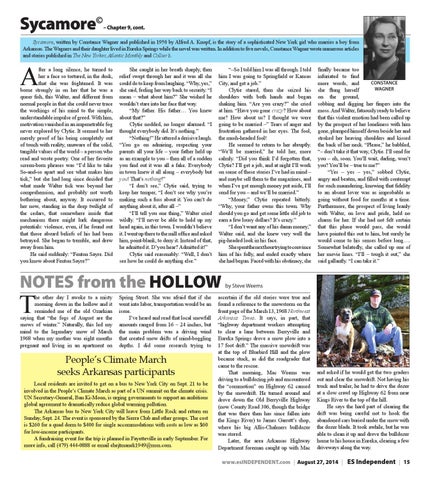 Sycamore, written by Constance Wagner and published in 1950 by Alfred A. Knopf, is the story of a sophisticated New York girl who marries a boy from Arkansas. The Wagners and their daughter lived in Eureka Springs while the novel was written. In addition to five novels, Constance Wagner wrote numerous articles and stories published in The New Yorker, Atlantic Monthly and Collier’s.

fter a long silence, he turned to her a face so tortured, in the dusk, that she was frightened. It was borne strongly in on her that he was a queer fish, this Walter, and different from normal people in that she could never trace the workings of his mind to the simple, understandable impulse of greed. With him, motivation vanished in an impenetrable fog never explored by Clytie. It seemed to her merely proof of his being completely out of touch with reality, unaware of the solid, tangible values of the world – a person who read and wrote poetry. One of her favorite screen-born phrases was “I’d like to take So-and-so apart and see what makes him tick,” but she had long since decided that what made Walter tick was beyond her comprehension, and probably not worth bothering about, anyway. It occurred to her now, standing in the deep twilight of the cedars, that somewhere inside that mechanism there might lurk dangerous potentials: violence, even, if he found out that those absurd beliefs of his had been betrayed. She began to tremble, and drew away from him. He said suddenly: “Fenton Sayre. Did you know about Fenton Sayre?”

She caught in her breath sharply, then relief swept through her and it was all she could do to keep from laughing. “Why, yes,” she said, feeling her way back to security. “I mean – what about him?” She wished he wouldn’t stare into her face that way. “My father. His father… You knew about that?” Clytie nodded, no longer alarmed. “I thought everybody did. It’s nothing.” “Nothing!” He uttered a derisive laugh. “You go on admiring, respecting your parents all your life – your father held up as an example to you – then all of a sudden you find out it was all a fake. Everybody in town knew it all along – everybody but you! That’s nothing!” “I don’t see,” Clytie said, trying to keep her temper, “I don’t see why you’re making such a fuss about it. You can’t do anything about it, after all –” “I’ll tell you one thing,” Walter cried wildly. “I’ll never be able to hold up my head again, in this town. I wouldn’t believe it. I went up there to the mill office and asked him, point-blank, to deny it. Instead of that, he admitted it. D’you hear? Admitted it!” Clytie said reasonably: “Well, I don’t see how he could do anything else.”

“–So I told him I was all through. I told him I was going to Springfield or Kansas City, and get a job.” Clytie stared, then she seized his shoulders with both hands and began shaking him. “Are you crazy?” she cried at him. “Have you gone crazy? How about me? How about us? I thought we were going to be married –” Tears of anger and frustration gathered in her eyes. The fool, the mush-headed fool! He seemed to return to her abruptly. “We’ll be married,” he told her, more calmly. “Did you think I’d forgotten that, Clytie? I’ll get a job, and at night I’ll work on some of those stories I’ve had in mind – and maybe sell them to the magazines, and when I’ve got enough money put aside, I’ll send for you – and we’ll be married.” “Money,” Clytie repeated bitterly. “Why, your father owns this town. Why should you go and get some little old job to earn a few lousy dollars? It’s crazy.” “I don’t want any of his damn money,” Walter said, and she knew very well the pig-headed look in his face. Shespentthenexthourtryingtoconvince him of his folly, and ended exactly where she had begun. Faced with his obstinacy, she

NOTES from the HOLLOW

he other day I awoke to a misty morning down in the hollow and it reminded me of the old Ozarkian saying that “the fogs of August are the snows of winter.” Naturally, this led my mind to the legendary snow of March 1968 when my mother was eight months pregnant and living in an apartment on

Spring Street. She was afraid that if she went into labor, transportation would be an issue. I’ve heard and read that local snowfall amounts ranged from 16 – 24 inches, but the main problem was a driving wind that created snow drifts of mind-boggling depths. I did some research trying to

People’s Climate March seeks Arkansas participants Local residents are invited to get on a bus to New York City on Sept. 21 to be involved in the People’s Climate March as part of a UN summit on the climate crisis. UN Secretary-General, Ban Ki-Moon, is urging governments to support an ambitious global agreement to dramatically reduce global warming pollution. The Arkansas bus to New York City will leave from Little Rock and return on Sunday, Sept. 24. The event is sponsored by the Sierra Club and other groups. The cost is $260 for a quad dorm to $400 for single accommodations with costs as low as $60 for low-income participants. A fundraising event for the trip is planned in Fayetteville in early September. For more info, call (479) 444-0888 or email ehejtmanek1949@msn.com.

finally became too infuriated to find CONSTANCE more words, and WAGNER she flung herself on the ground, sobbing and digging her fingers into the moss. And Walter, fatuously ready to believe that this violent emotion had been called up by the prospect of her loneliness with him gone, plumped himself down beside her and stroked her heaving shoulders and kissed the back of her neck. “Please,” he babbled, “– don’t take it that way, Clytie. I’ll send for you – oh, soon. You’ll wait, darling, won’t you? You’ll be – true to me?” “Yes – yes – yes,” sobbed Clytie, angry and beaten, and filled with contempt for such maundering, knowing that fidelity to an absent lover was as improbable as going without food for months at a time. Furthermore, the prospect of living leanly with Walter, on love and pride, held no charm for her. If she had not felt certain that this phase would pass, she would have pointed this out to him, but surely he would come to his senses before long…. Somewhat belatedly, she called up one of her movie lines. “I’ll – tough it out,” she said gallantly. “I can take it.”

ascertain if the old stories were true and found a reference to the snowstorm on the front page of the March 13, 1968 Northwest Arkansas Times. It says, in part, that “highway department workers attempting to clear a lane between Berryville and Eureka Springs drove a snow plow into a 17 foot drift.” The massive snowdrift was at the top of Bluebird Hill and the plow became stuck, as did the roadgrader that came to the rescue. That morning, Mac Weems was driving to a bulldozing job and encountered the “commotion” on Highway 62 caused by the snowdrift. He turned around and drove down the Old Berryville Highway (now County Road 306, though the bridge that was there then has since fallen into the Kings River) to James Garrett’s shop, where his big Allis-Chalmers bulldozer was stored. Later, the area Arkansas Highway Department foreman caught up with Mac

and asked if he would get the two graders out and clear the snowdrift. Not having his truck and trailer, he had to drive the dozer at a slow crawl up Highway 62 from near Kings River to the top of the hill. He says the hard part of clearing the drift was being careful not to hook the abandoned cars buried under the snow with the dozer blade. It took awhile, but he was able to clean it up and drove the bulldozer home to his house in Eureka, clearing a few driveways along the way.