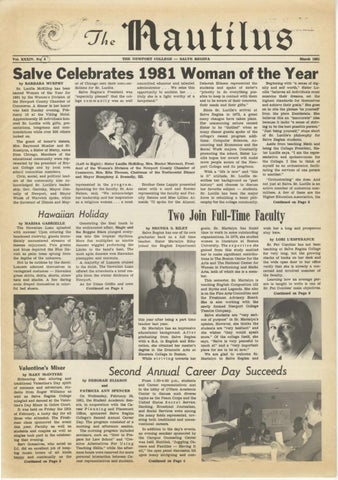 Salve Celebrates 1981 Woman of the Year

by BARBARA MURPHY Sr. Lucille McKillop has been named Woman of the Year for 1981 by the Women's Division of the Newport County Chamber of Commerce. A dinner in her honor was held Sunday evening, February 15 at the Viking Hotel. Approximately 25 individuals honored Sr. Lucille with gifts, presentations, telegrams and commendations while over 300 others looked on. The guest of honor's sisters, Mrs. Raymond Mueller and Sr. Rosalyna, a Sister of Mercy, came from Chicago. Members of the educational community were represented by the president of Bryant College and by local area school committee members. Civic, social, and political leaders of the community also acknowledged Sr. Lucille's leadership. Gov. Garrahy, Mayor Donnelly of Newport, and Mayor Walsh of Warwick spoke, while the Governor of Illinois and May-

or of Chicago sent their com1.1endations for Sr. Lucille. Salve Regina's President was "especially pleased" that the college c o m m u n i t y was so well

(Left to Right): Sister Lucille McKillop, Mrs. Hector Marcucci, President of the Women's Division of the Newport County Chamber of Commerce, Mrs. Rita Thomas, Chairman of the Testimonial Dinner and Mayor Humphrey J. Donnelly, m. represented in the p r o g r a m . Speaking for the faculty, Sr. Ann Nelson, said, "We acknowledge her leadership and her inspiration as a religious woman . . . a most

Hawaiian Holiday by MARISA GABRIELLE The Hawaiian Luau splashed with success! Upon entering the bambooed stairway, guests immediately encountered streams of insense enjoyment. Pale greens and blues depicted the Blue Hawaii as palm trees sprung from the depths of the unknown. Not to be outdone by the decor, Luauers adorned themselves in variegated costumes - Hawaiian grass skirts, shirts, shorts, straw hats and shades. A few daring souls draped themselves in colorful bed sheets.

committed educator and talented administrator . . . We seize this opportunity to acclaim her truly she is a light worthy of a lampstand."

Generating the final touch to the emblazoned affair, Magic and the Reggae Stars plunged everyone into the tropical rhythms. More fun multiplied as nimble dancers wiggled performing the Limbo to the band's beat. The most agile dancers won Hawaiian pineapples and coconuts. A majority of Luauers cruised to the finish. The Hawaiian Luau offered the attendants a brief respite from the winter doldrums of Newport. As for Diane Griffin and crew Continued on Page 4

Brother Gene Lappin presented sister with a card and flowers representing the faculty and Faculty Senate and Miss Lillian Almeida '72 spoke for the Alumni.

by MARY McINTYRE Enhancing that alluring and traditional Valentine's Day spirit of romance and adventure, students from Roger Williams as well as Salve Regina College mingled and danced at the Valentine's Day Mixer in Ochre Court. It was held on Friday the 13th of February, a lucky day for all those who attended. The Freshman class sponsored the event this year. Faculty as well as students and couples as well as singles took part in the celebrating that evening. Serv Gonsalves, who acted as DJ, did an excellent job of keeping music lovers of all kinds happy and continually on the Continued on Page 5

Beginning with "a sense of dignity and self worth," Sister Lucille "believes all individuals must examine their dreams, set the highest standards for themselves and achieve their goals." She goes on to cite the phrase 'be yourself' from the piece Desiderata. She believes this an "inaccurate" idea because it lacks "a sense of striving to be the best possible person." "Just being yourself," stops short of Sr. Lucille's philosophy for Salve Regina students. Aside from teaching Math and being the College President, Sister Lucille says, "I am the representative and spokeswoman for the College. I like to think of myself as an orchestrator, facilitating the services of one person to another." "Orchestrating" she does. And not just at Salve. Sr. Lucille is an active member of numerous committees. A few of these are the Higher Education Association, the Continued on Page 6

Two Join Full-Time Faculty by BRENDA S. RILEY Salve Regina has one of its own graduates back as a full time teacher. Sister Marialyn Riley joined the English Department

this year after being a part time teacher last year. Sr. Marialyn has an impressive educational background. A f t e r graduating from Salve Regina with a B.A. in English and Education, she obtained her master's degree in the Dramatic Arts at Emerson College in Boston. While s t r i v i n g towards her

Deborah Eliason represented the students and spoke of sister's "priority to do everything possible to keep in contact with them and to be aware of their concerns, their needs and their gifts." Since Sr. Lucille's arrival at Salve Regina in 1973, a great many changes have taken place. Her unassuming nature caused Sister to be "thrilled" when so many dinner guests spoke of the college's recent program additions: Computer Sciences, Accounting and Economics and the Social Work majors. Constantly promoting the school, Sister Lucille hopes her award will make more people aware of the Newport College and its programs. With a "life is now" and "this is it" attitude, Sr. Lucille describes her background as "past history" and chooses to discuss her favorite subject - students. Sr. Lucille has been the major force in rebuilding a basic philosophy for the college community.

goals, Sr. Marialyn has found time to work in some outstanding organizations. In 1979, she studied women in literature at Boston University. The expertise she gained from this study enabled her to make significant contributions to The Boston Center for the Arts and The National Center for Women in Performing and Media Arts, both of which she is a member. This semester, Sr. Marialyn is teaching English Composition 102 and Myths and Legends. She also is on the Fine Arts Committee and the Freshman Advisory Board. She is also working with the newly formed Newport College Theatre Company. Salve students are "very serious of purpose" in Sr. Marialyn's opinion. However, she thinks the students are "very hesitant" and she wishes "they would speak more." Of the college itself, she says, "Salve is very peaceful to teach at" and a "very important place for me to be at now." We are glad to welcome Sr. Marialyn to Salve Regina and

wish her a long and prosperous stay here. by LORI L'ESPERANCE Sr. Pat Copibies has not been teaching at Saive Regina College for very long, but the growing stacks of books on her desk and the wide open door to her office verify that she is already a concerned and involved member of the faculty. Leaming how an average person is taught to write is one of Sr. Pat Combies' main objectives. Continued on Page 6

and PATRICIA ANN SPENCER On Wednesday, February 25, 1981, the Student Academic Senate, in cooperation with the Career P l a n n in g and Placement Office, sponsored Salve Regina College's Second Annual Career Day. The program consisted of a morning and afternoon session. The morning program included seminars, such as, "How to Prepare for Law School" and "Creative Alternatives For U s in g Teaching Skills," while the afternoon hours were reserved for more personal interaction between Career representatives and students.

From 1:30-4:00 p.m., students and Career representatives met in the lobby of O'Hare Academic Center to discuss such diverse topics as the Peace Corps and the United States S e c r e t Service. Banking, Broadcast Journalism, and Social Services were among the many fields represented, covering both traditional and unconventional careers. In addition to the day's events, an evening seminar sponsored by the Campus Counseling Center was held. Entitled, ''Juggling Careers and Families - Having it all," the open panel discussion hit upon many intriguing and comContinued on Page 4