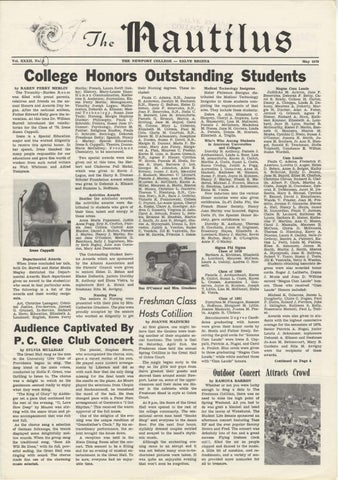 College Honors Outstanding Students by KAREN PERRY MERLIN The Twombly - Burden R o o m was filled with proud parents, relatives and friends as the annual Honors and Awards Day began. After the national anthem, Father Edward Kelly gave the invocation. At this time Dr. William Burrell introduced the valedictorian for the Class of &#39;79, Irene Susan Cappalli. Irene is a Special Education major and has worked diligently to receive this special honor. In her speech, Irene thanked the many people responsible for our educations and gave fine words of wisdom from such noted writers as Walt Whitman and Alfred Tennyson.

Irene Cappalll Departmental Awards When Irene concluded her talk, both Dr. Burrell and Sister Sheila Megley distriuted the Departmental Awards. Each department gives an award to the student(s) who excel in that particular area. The following is a list of the awards and their worthy recipients. Art, Christine Lanagan; Criminal Justice, Pre-Service, Jermell G. Grinnell, In-Service, Richard A. Horn; Education, Elizabeth A. Lombard; English, Karen :Perry

Nursing Pins The seniors in Nursing were presented with their pins by Mrs. Catherine Graziano. The pins were proudly accepted by the seniors who worked so diligently to get

The pianist, Stephen Moore, who accompanied the chorus, also, gave a varied recital of his own. He played some modern arrangements by Liberace and did so with such flair that the only thing missing for the final touch was the candle on the piano. As Moore played the selections from Chopin and Rachmaninoff, he transfixed the mood of the hall. He then changed pace with a Peter Nero arrangement of Gershwin&#39;s &quot;I Got Rhythm.&quot; This received the warm approval of the full nouse. One of the delights of the evening was the unique rendition of &quot;Grandfather&#39;s Clock.&quot; By his extraordinary performance, the soloist brought the house down. A reception was held in the State Dining Room after the concert. This seemed to be a fitting end for an evening of musical entertainment in the Great Hall. To be sure, everyone had an enjoyable time.

The Outstanding Student Service Awards which are sponsored by the Alumni Association and the Parents&#39; Council were given to seniors Helen D. Behan and Elaine Desantis, juniors Dorothy B. Anthony and Elena Vieira, to sophomore Keri A. Strain and freshman Rita M. Sevigny.

Audience Captivated By P. C. Glee Club Concert by SYLVIA MULLIGAN The Great Hall rang as the men in the University Glee Club of Providence began to sing. The deep blend of the male voices, conducted by Hollis F. Grant, was thrilling to listen to. The chorus was a delight to watch as the gentlemen seemed really to enjoy what they were doing. &quot;The King of Glory&quot; by Aichinger set a pace that continued for the rest of the evening. &quot;O, Love How Deep&quot; by Mouret was stirring with the snare drum and piano accompaniment that was rich and full. As the chorus sang a selection of German folksongs, the tenors displayed some delightfully mellow sounds. When the group sang the traditional song, &quot;Soon Ah Will Be Done,&quot; with its full, powerful ending, the Great Hall was ringing with sound. The chorus made fine use of the charming music selected.

by JOANNE MAZNICKI At first glance, one might believe that the Goulets were hosting another of their exquisite social functions. The truth is that on Saturday, April 21st, the Freshman class held the annual Spring Cotillion in the Great Hall of Ochre Court. The magic began early in the day as the girls and guys from Salve greeted their guests and showed them around scenic Newport. Later on, some of the upperclassmen and their dates ate dinner in the cafeteria while the Freshmen dined in style at Ochre Court. At 9 p.m. the doors of the Great Hall were opened to the rest of the college community. The sensational seven man band &quot;Smoke Shop&quot; sent everyone to the dance floor. For the next four hours, stylishly dressed couples swirled and swayed to the band&#39;s rhythmic music. Although the enchanting evening came to an abrupt end it was not before many soon-to-becherished pictures were taken. It was quite an enjoyable evening that won&#39;t soon be forgotten.

Outdoor Concert Attracts Crowd by RAMONA BARRON Whether or not you were lucky enough to drag a date to The Freshman Cotillion, there was no need to miss the high point of Spring Weekend. All you had to do was grab a blanket and head for the lawns of Wakehurst. The Student Life Senate sponsored an afternoon concert featuring Tazz RF and the ever popular Sammy Brown and Fred. The concert was definitely lots of fun and a great success. Flying frisbees (look out!), filled the air as people clapped and danced to the music. A little bit of sunshine, cool refreshments, and a variety of music provided more memories for all to treasure.