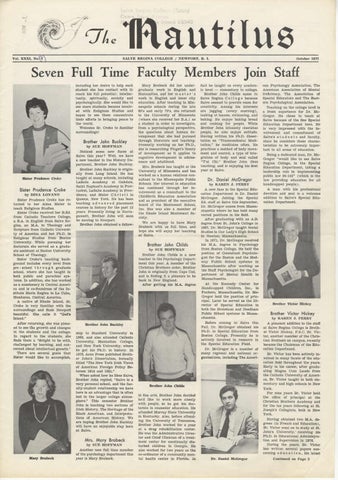 Full Time Faculty Members Join Staff including her desire to help each student she has contact with to reach his full potential: intellectually, spiritually, socially and psychologically. She would like to see more students become involved with Religious Studies and hopes to see them concentrate their efforts in bringing peace to the world. Welcome Sr. Croke to familiar surroundings!

Sister Prudence Croke by DINA LONANO Sister Prudence Croke has returned to her Alma Mater to teach Religious Studies. Sister Croke received her B.Ed. from Catholic Teachers College, a B.A. in English from Salve Regina, an M.A. in Theology and Scripture from Catholic University of America and her Ph.D. in Religious Studies from Boston University. While pursuing her doctorate she served as a graduate assistant at Boston University School of Theology. Sister Croke&#39;s teaching background includes every level from pre - school t h r o u g h graduate school, where she has taught in both public and parochial systems. In addition, she has worked as a missionary in Central America and is co-foundress of the Institute Maria Regina in La Cuba, Honduras, Central America. A native of Rhode Island, Sr. Croke is very familiar with the surroundings and finds Newport beautiful. She calls it &quot;God&#39;s Island.&quot; After returning, she was pleased to see the growth and changes in the students and the college. In regard to the students, she finds them a &quot;delight to be with, challenged by learning, and concerned about intellectual growth.&quot; There are several goals that Sister would like to accomplish,

by SUE HOFFMAN Noticed some new faces at Salve this year? Well, we have a new teacher in the History Department, Brother John Buckley. Brother John Buckley is originally from Long Island. He has taught at many schools, including LaSalle Academy at Oakdale, Saint Raphael&#39;s Academy in Pawtucket, LaSalle Academy in Providence, and Mater C h r i s t i in Queens, New York. He has been teaching a d v a n c e d placement courses in history for the past 13 years. Presently living in Narragansett, Brother John will soon be moving to Newport. Brother John obtained a fellow-

Mary Brabeck did her undergraduate work in English and Humanities, and her master&#39; s work in English and inner city education. After teaching in Minneapolis schools during the late 60&#39;s and early 70&#39;s, she returned to the University of Minnesota (where she received her B.A.) as a student in order to investigate, from a psychological perspective, the questions about human development that she had pursued through literature and teaching. Presently working on her Ph.D., she is researching Piaget&#39;s theory of development as it applies to cognitive development in adolescence and adulthood. Mrs. Brabeck has taught at the University of Minnesota and has worked as a human relations consultant to the Minneapolis Public Schools. Her interest in education has continued through her Involvement as a consultant to the Childbirth Education Association and as president of the executive board of the Montessori School, Inc. She was also a member of the Rhode Island Montessori Society. We are happy to have Mary Brabeck with us full time, and hope she will enjoy her teaching at Salve.

Brother John Childs by SUE HOFI&lt;&#39;MAN Brother John Childs is a new teacher in the Psychology Department this year. A member of the Christian Brothers order, Brother John is originally from Cape Cod, and is finding it a pleasure to be back in New England. After getting his M.A. degree

Brother John Buckley ship to Stanford University in 1966, and also attended Catholic University, Manhattan College, and New York University, where he got his Ph.D. in history. In 1976, Arno Press published Brother John&#39;s Dissertation, formally titled &quot;The New York Irish Views of American Foreign Policy Between 1914 and 1921.&quot; When asked how he likes Salve, Brother John replied, &quot;Salve is a very personal school, and the faculty-student relationship we have here is an advantage that is often lost in the larger college atmosphere.&quot; This semester Brother John is teaching two sections of Irish History, The Heritage of the Black American, and Interpretations of American History. We are hoping Brother John Buckley will have an enjoyable stay here at Salve.

by SUE HOFFMAN Another new full time member of the psychology department this year is Mary Brabeck.

fact he taught on every academic level - elementary to college. Brother John Childs came to Salve Regina Co 11 e g e because Salve seemed to provide room for creativity. Among his interests are jogging ( every morning), looking at houses, swimming, and baking. He enjoys baking bread and cooking for people. While Brother John intensely cherishes people, he also enjoys solitude. Having written his Ph.D. dissertation on &quot;Transcendental Meditation,&quot; he meditates often. He practices a method of body movement and control, a type of integration of body and soul called &quot;T&#39;ai Chi.&quot; Brother John likes teaching, and is enjoying his first year at Salve.

Brother John Childs in fine arts, Brother John decided he&#39;d like to work more closely with people, so he got his doctorate in counselor education. He attended Murray State University in Kentucky. Also, before attending the University of Tennessee, Brother John worked for a year at a drug rehabilitation center. He was the Administrative Director and Chief Clinician of a treatment center for emotionally disturbed children in Georgia. He also worked for two years as the co-ordinator of a community mental health center in Florida. In

Brother Victor Hickey by KAREN J. PERRY A pleasant addition to the staff at Salve Regina College is Brother Victor Hickey, F.S.C. Br. Victor, another member of the Christian Brothers on campus, recently became the Chairman of the Education Department. Br. Victor has been actively involved in many facets of the education field throughout the years. Early in his career, after graduating Magna Cum Laude from the Catholic University of America, Br. Victor taught in both elementary and high schools in New York. For nine years Br. Victor held the office of principal at the Christian Brothers Academy and for the ten years following at St. Joseph&#39;s Collegiate, both in New York. Having obtained two M.A. degrees (in French and Education), Br. Victor went on to study at St. John&#39;s University, - receiving his Ph.D. in Educational Administration and Supervision in 1976: During the years, Br. Victor has written several papers concerning e d u c a t i o n , his latest Continued on Page 2