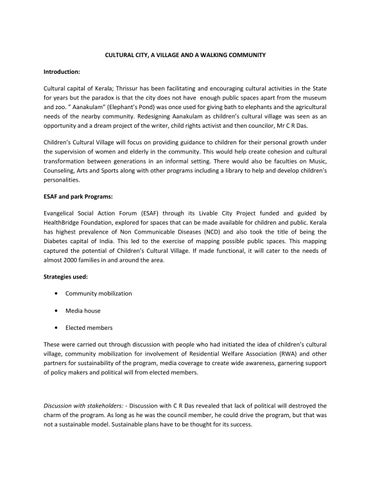 CULTURAL CITY, A VILLAGE AND A WALKING COMMUNITY Introduction: Cultural capital of Kerala; Thrissur has been facilitating and encouraging cultural activities in the State for years but the paradox is that the city does not have enough public spaces apart from the museum and zoo. ” Aanakulam” (Elephant’s Pond) was once used for giving bath to elephants and the agricultural needs of the nearby community. Redesigning Aanakulam as children’s cultural village was seen as an opportunity and a dream project of the writer, child rights activist and then councilor, Mr C R Das. Children’s Cultural Village will focus on providing guidance to children for their personal growth under the supervision of women and elderly in the community. This would help create cohesion and cultural transformation between generations in an informal setting. There would also be faculties on Music, Counseling, Arts and Sports along with other programs including a library to help and develop children's personalities. ESAF and park Programs: Evangelical Social Action Forum (ESAF) through its Livable City Project funded and guided by HealthBridge Foundation, explored for spaces that can be made available for children and public. Kerala has highest prevalence of Non Communicable Diseases (NCD) and also took the title of being the Diabetes capital of India. This led to the exercise of mapping possible public spaces. This mapping captured the potential of Children’s Cultural Village. If made functional, it will cater to the needs of almost 2000 families in and around the area. Strategies used: •

These were carried out through discussion with people who had initiated the idea of children’s cultural village, community mobilization for involvement of Residential Welfare Association (RWA) and other partners for sustainability of the program, media coverage to create wide awareness, garnering support of policy makers and political will from elected members.

Discussion with stakeholders: - Discussion with C R Das revealed that lack of political will destroyed the charm of the program. As long as he was the council member, he could drive the program, but that was not a sustainable model. Sustainable plans have to be thought for its success.

Discussion with community: While community really wants the area to be functional, but they lacked the idea of reclaiming. When ESAF approached, the community was looking for someone who can guide and support them for making the space functional.

Discussion with media: Discussion and meetings with different media houses on the importance of large functional space for the benefit of the community was positive. They extended support to bring it to the attention of the community and political leaders.

Discussion with the city administration: Series of meetings were organized to create interest among members of city administration for the renovation of area. Interaction with the librarian: This full -fledged library was underutilized. The librarian recounts, when the cultural village was initiated the vision was to make it child-friendly. Unfortunately, things did not work-out due to political interference. Impact created: Community was mobilized to stand for their rights on Public Space. The initial interaction with the bureaucrats did no good. Enormous discussions and meetings with community, officials from concerned departments and city administration took a while; meanwhile the community mobilization was easiest part. This reinforced immense demand of space in the community. The representatives from community and ESAF decided to clean up the area. Simultaneously, advocacy efforts with concerned authorities and elected members were carried out. Followed by the clean up drive, The Member of Legislative Assembly (MLA), suggested forming an action council to spearhead the renovation of the park. This council put constant pressure on the city administration that was initially reluctant to do any development work in the area. Constant advocacy efforts paid off when the Mayor of the city agreed to approve the functioning of the Action Council. As administrative obstacles continued, the team looked at the prospective officials who can be convinced on the need of such spaces and its benefits for the community. The entire neighborhood embraced the opportunity to renovate and reclaim its own park. Media created awareness about the importance and benefits of such parks in the community. Followed by cleanup activities, community members started using the park for walking, children started using the very limited play spaces. This place has once again found its purpose, to be filled with people and children. It now, caters to the need of 2000 families in the surroundings which means that from their sedentary lifestyle, they all have the potential and opportunity to adopt active lifestyle. Currently almost 100 people use the park for their morning and evening walking and other exercises. People started taking ownership and initiatives to maintain the area. The one week long vacation camp organized for children was very well received. The community members took active role and shared the

responsibility of running the program for children. Currently park is open for public which is well used by the community. Simultaneous advocacy with the council members and other concerned departments helped encourage them to allocate funds for further developments and maintenance. Future plans: •

Weekly programs and capacity building for parents or elderly to self run the programs.

Walking trails around the pond has the potential to be re created as a great public space in the neighborhood.

Financial support / corporate sponsorship for clean up the pond is in pipeline.

This initiative from Kerala, India is an excellent example of how advocacy with different stakeholders can lead to reclaiming of public spaces. Cultural village in Kerala, India has been abandoned and children and adults alike do not have any public space in the city. Livable City ne...

Cultural village in Kerala, India has been abandoned and children and adults alike do not have any public space in the city. Livable City ne...