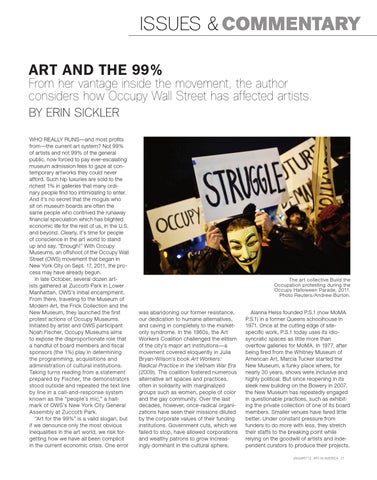 ISSUES &amp; COMMENTARY ART AND THE 99%

From her vantage inside the movement, the author considers how Occupy Wall Street has affected artists. BY ERIN SICKLER WHO REALLY RUNS—and most profits from—the current art system? Not 99% of artists and not 99% of the general public, now forced to pay ever-escalating museum admission fees to gaze at contemporary artworks they could never afford. Such hip luxuries are sold to the richest 1% in galleries that many ordinary people find too intimidating to enter. And it’s no secret that the moguls who sit on museum boards are often the same people who contrived the runaway financial speculation which has blighted economic life for the rest of us, in the U.S. and beyond. Clearly, it’s time for people of conscience in the art world to stand up and say, “Enough!” With Occupy Museums, an offshoot of the Occupy Wall Street (OWS) movement that began in New York City on Sept. 17, 2011, the process may have already begun. In late October, several dozen artists gathered at Zuccotti Park in Lower Manhattan, OWS’s initial encampment. From there, traveling to the Museum of Modern Art, the Frick Collection and the New Museum, they launched the first protest actions of Occupy Museums. Initiated by artist and OWS participant Noah Fischer, Occupy Museums aims to expose the disproportionate role that a handful of board members and fiscal sponsors (the 1%) play in determining the programming, acquisitions and administration of cultural institutions. Taking turns reading from a statement prepared by Fischer, the demonstrators stood outside and repeated the text line by line in a call-and-response system known as the “people’s mic,” a hallmark of OWS’s New York City General Assembly at Zuccotti Park. “Art for the 99%” is a valid slogan, but if we denounce only the most obvious inequalities in the art world, we risk forgetting how we have all been complicit in the current economic crisis. One error

was abandoning our former resistance, our dedication to humane alternatives, and caving in completely to the marketonly syndrome. In the 1960s, the Art Workers Coalition challenged the elitism of the city’s major art institutions—a movement covered eloquently in Julia Bryan-Wilson’s book Art Workers: Radical Practice in the Vietnam War Era (2009). The coalition fostered numerous alternative art spaces and practices, often in solidarity with marginalized groups such as women, people of color and the gay community. Over the last decades, however, once-radical organizations have seen their missions diluted by the corporate values of their funding institutions. Government cuts, which we failed to stop, have allowed corporations and wealthy patrons to grow increasingly dominant in the cultural sphere.

Alanna Heiss founded P.S.1 (now MoMA P.S.1) in a former Queens schoolhouse in 1971. Once at the cutting edge of sitespecific work, P.S.1 today uses its idiosyncratic spaces as little more than overflow galleries for MoMA. In 1977, after being fired from the Whitney Museum of American Art, Marcia Tucker started the New Museum, a funky place where, for nearly 30 years, shows were inclusive and highly political. But since reopening in its sleek new building on the Bowery in 2007, the New Museum has repeatedly engaged in questionable practices, such as exhibiting the private collection of one of its board members. Smaller venues have fared little better. Under constant pressure from funders to do more with less, they stretch their staffs to the breaking point while relying on the goodwill of artists and independent curators to produce their projects. JANUARY’12 ART IN AMERICA 31

Ultimately, we know that the creation of a few art stars is based on the unrewarded labor of the majority, but the art market, which has grown exponentially in the last 20 years, has made art look like a viable form of employment. Art students flock to MFA programs, which have increased drastically since the 1990s, with the expectation that they too can “make it.” The vast sums of money floating through galleries and auc-

people, moderated by a rotating group of facilitators trained in the movement’s consensus-based process. Beyond Occupy Museums and other actions, performances and exhibitions, the most interesting art to come out of OWS may be the occupation itself. In Distinction (1979), a thorough study of “taste” in mid-20th-century France, Pierre Bourdieu laments that the primary activity of

THE VAST SUMS OF MONEY FLOATING THROUGH THE ART WORLD IN RECENT DECADES HAS HELPED TO CONCEAL THE FACT THAT MOST ARTISTS WILL NEVER EARN A LIVING FROM THEIR WORK.

I attended an international conference in Montreal about social and solidarity economies.1 Instead of prioritizing profit above all else, these economies encourage civic institutions to build cultures of mutual support and to adopt practices that encourage economic, social and environmental justice. At the conference, 1,000-plus participants, including businesspeople and government officials, discussed a range of methods to radically alter the world’s way of doing business. I left excited but also deflated, wondering how this type of thinking could ever take root here in the U.S., where divisions are so deep and distrust so entrenched. It would require not only a restructuring of all our institutions but a total reordering of our daily habits of work and life. I often think of artists as Vedic scribes or members of monastic orders who secretly maintain analog technologies, archaic forms of knowledge and alternative ways of being in the world during times when there seems to be no hope, no alternative. With Occupy Wall Street, we see a slight chance to bring these anarchic forms of wisdom back into the world. But as is often the case, we are our own greatest enemies. Torn between our The Flow Chart of the Declaration of the Occupation of NYC, 2011, individual ambitions and our desire for the ink on paper, 5 feet square; developed through a crowd-editing process in Zuccotti Park facilitated by artist Rachel Schragis. greater good, we have lost our way. This is why achieving changes will take more than simply protesting museum policies, fairly tion houses has helped to conceal the fact taxing top earners or reinstating the regulaartists and academics today is to reproduce that most artists will never earn a living from their own privileged cultural status. Peter tions of the Glass-Steagall Act, which curbed their work. Driven to ever greater fits of proBürger, in his Theory of the Avant-Garde speculation and kept investment banks sepaductivity, artists become more vulnerable by rate from savings banks. It will instead require (1974), contrasts the historical avantcompeting against one another for every us to come together to build new economic gardes of Europe at the turn of the 20th opportunity—all for the chance to succentury—led by artists who were actively infrastructures and modes of artistic producceed in an industry that treats their cultural involved in reshaping society’s norms—with tion that empower us, our local communities output as products for a hyperinflated marand our broader international networks. later forms of modern art such as Abstract ket or as display items in noncommercial Right now, as we examine the collusion of Expressionism and Pop art, which merely spaces that are unlikely to pay them. reframed the idea of revolution as esthetic power and money, we have an opportunity to Occupy Wall Street has created a new transformation. These findings continue to look very clearly, and with great compassion, sense of urgency around this cognitive be my reality check, preventat the ways we have all been dissonance. Every evening [as this issue co-opted into reproducing ing me from considering art 1 International Forum on the Social and goes to press], a broad range of artists and as some kind of moral good inequitable and oppressive Solidarity Economy, Palais economic relations. OWS is culture workers gather together for meetin and of itself. They challenge des congrès, Montreal, ings of the OWS Arts and Culture Working me to use whatever agency I not merely an inconvenient Oct. 17-20, 2011. Group. Arts and Culture is the second manage to obtain in ways that truth or a temporary situation, largest working group of New York’s OWS, empower others. but rather an unpredictable, ERIN SICKLER is with over 400 registered participants. In the days prior to the first unfolding movement. I really a curator based in Meetings typically draw from 20 to 40 hope we don’t waste it. Occupy Museums action, Brooklyn. 32 ART IN AMERICA JANUARY’12

From her vantage inside the movement, the author considers how Occupy Wall Street has affected artists.