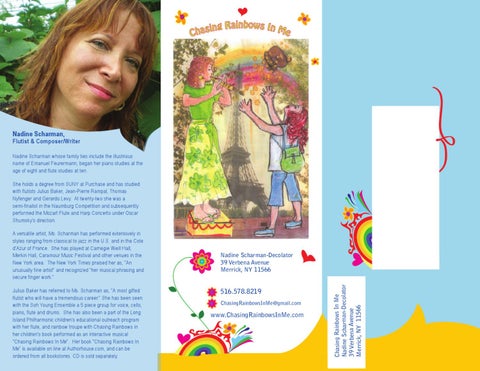 ing Rainbows In Me s a h C

Flutist & Composer/Writer Nadine Scharman whose family ties include the illustrious name of Emanuel Feurermann, began her piano studies at the age of eight and flute studies at ten. She holds a degree from SUNY at Purchase and has studied with flutists Julius Baker, Jean-Pierre Rampal, Thomas Nyfenger and Gerardo Levy. At twenty-two she was a semi-finalist in the Naumburg Competition and subsequently performed the Mozart Flute and Harp Concerto under Oscar Shumsky’s direction. A versatile artist, Ms. Scharman has performed extensively in styles ranging from classical to jazz in the U.S. and in the Cote d’Azur of France. She has played at Carnegie Weill Hall, Merkin Hall, Caramour Music Festival and other venues in the New York area. The New York Times praised her as, “An unusually fine artist” and recognized “her musical phrasing and secure finger work.”

Julius Baker has referred to Ms. Scharman as, “A most gifted flutist who will have a tremendous career.” She has been seen with the Soh Young Ensemble a 5 piece group for voice, cello, piano, flute and drums. She has also been a part of the Long Island Philharmonic children’s educational outreach program with her flute, and rainbow troupe with Chasing Rainbows in her children’s book performed as an interactive musical “Chasing Rainbows In Me”. Her book “Chasing Rainbows In Me” is available on line at Authorhouse.com, and can be ordered from all bookstores. CD is sold separately. 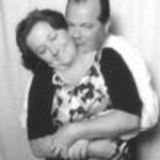 Chasing Rainbows in Me brochure

Chasing Rainbows in Me is an interactive children's program, brochure and music CD that encourages building one's self-esteem. The main char...

Chasing Rainbows in Me brochure

Chasing Rainbows in Me is an interactive children's program, brochure and music CD that encourages building one's self-esteem. The main char...